Delhi Climbs The Social Indicator Index But Struggles With Crime 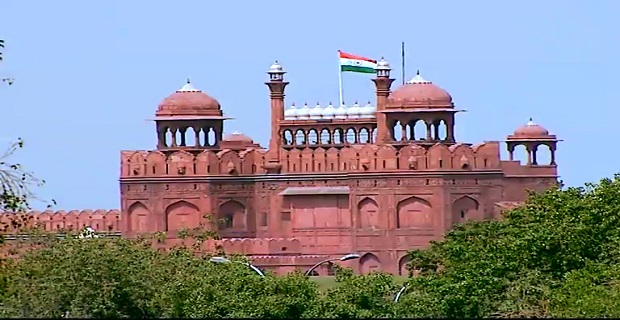 * Delhi ranks second in India in cases of atrocities against women

Writing in Mumbai where we are based, one can only gaze in awe as the city-state of Delhi is lavished with riches in the form of good roads, a world class metro and an airport. Equally, we can only hope that the city’s poor track record in managing crime in general and against women in specific does not spread elsewhere and it has better success in fixing this menace.

But there’s also the local politics of Delhi, historically believed to be Indraprastha, the capital of the Pandavas in the Mahabharata.Elections will be held on December 4 with over 11.5 million voters eligible to cast their ballots in 70 constituencies.

While the polls and surveys have had a field day already, let’s look at what’s really happened on ground. And then look forward to the results to be announced on December 9 in this context.

Let us first break down the economy and then onto the social indicators.

The economy is divided into three sectors: 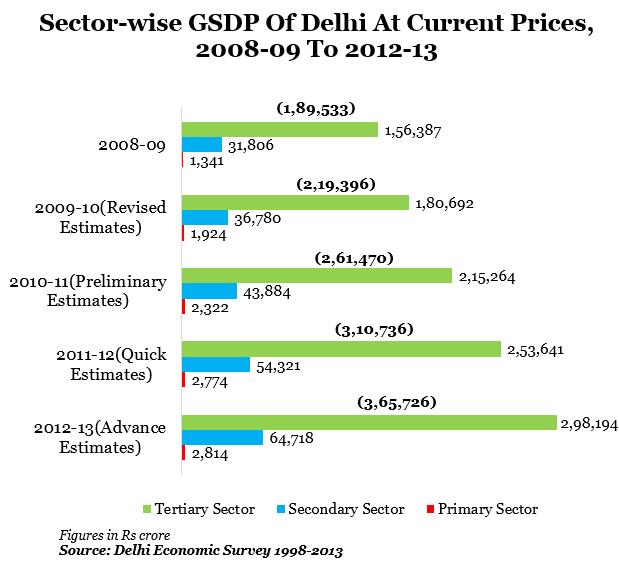 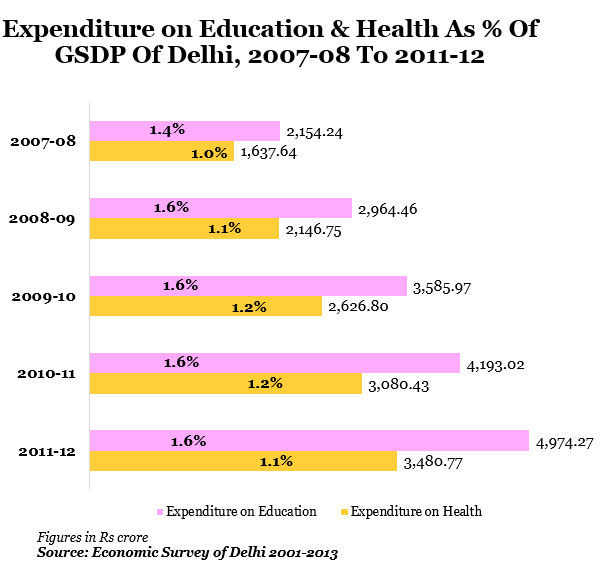 The outcomes on education are reported by DISE (District Information System for Education) in a comprehensive manner but we will restrict ourselves to some key statistics under three heads: 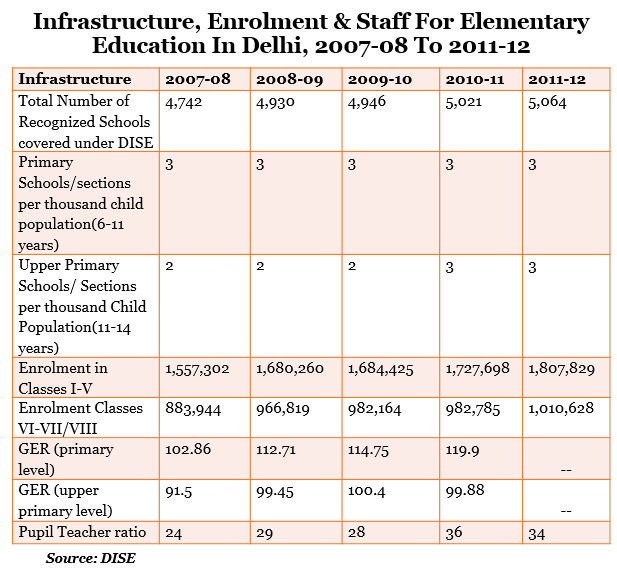 According to the recommendations of the World Health Organisation (WHO), the bed-population ratio target for year 2000 was 5 beds per 1,000 persons. In case of Delhi, the ratio was half the recommended ratio. While the number of beds has increased 30% since 2004, it does not seem to be enough. The year 2009 saw the largest increase in beds, which correlates with increased spending on health in 2008-09. 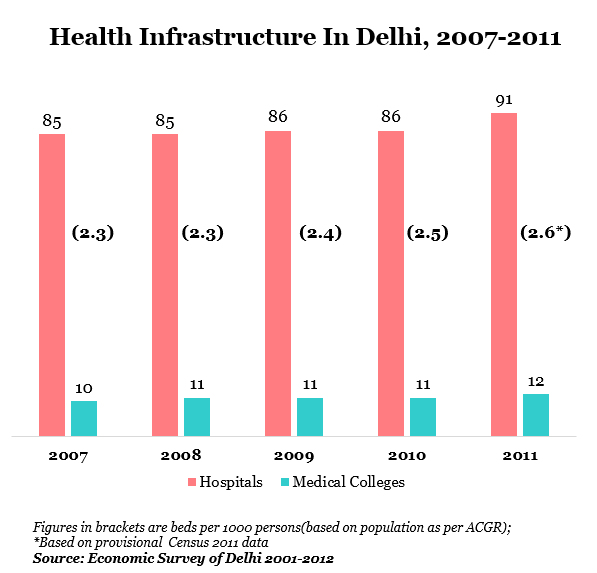 Delhi is doing well in key health targets. Crude birth, death and infant mortality rates are much lower than the all-India ratio, and have been declining since 2004.

If we do a comparison of health indicators between Delhi and Mumbai which has a similar population size, we see that in 2011 Mumbai’s death rate (per 1000) was 7.4 and Delhi’s death rate was 4.3 which is much lower. Infant mortality rate was also lower in Delhi for 2011 with 28; Mumbai was 29.53 for the same year. Delhi’s birth rate in 2011 was however higher at 17.5 compared to Mumbai which had a birth rate 13.5. 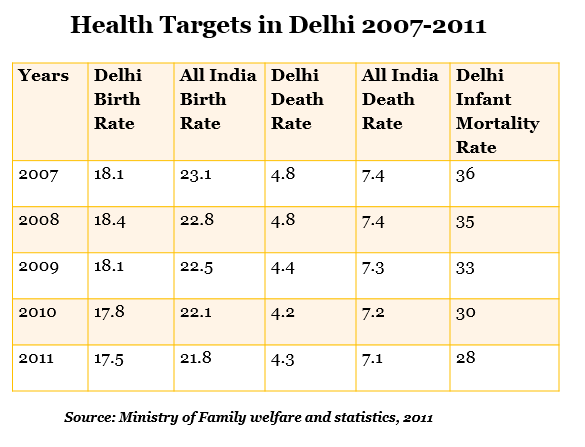 If we look at the plan outlay for urban development under the 10th and 11thFive-Year Plan, we see that expenditure for the sector has almost doubled but its share of the total plan outlay has decreased in the 11thPlan compared to the previous plan. This is interesting as the area and population of the urban areas in Delhi has increased over the period of the decade.

The Government of National Capital Territory of Delhi (GNCTD) in 1995 entered into equity participation with Government of India in a 50:50 ratio i.e. equal participation to implement the MRTS project being implemented by the Delhi Metro Rail Corporation (DMRC) ltd. set-up in 1995. In all, the funds allocated or invested were: Rs. 4573 crores.

Delhi has increased its GSDP (at current prices) more than 6-fold since 1998 and almost 3-fold since 2004, growing at an average of 16% in the period which is significant. Delhi has been able to do this through the growth of its service sector. The state has done well to step up education spend and enrolment ratios for both primary and upper primary schools have seen marked increases. However, pupil-teacher ratio is something that hasn’t improved much and there is room for improvement.

Delhi has been ahead of the national ratios for its key health targets although it has to improve its health infrastructure to match international standards being the capital of the country and one of the major cities in India. Having said that, the work on ground looks better from where we are sitting. But that was not a new debate, was it.

Editors Note: A rushed version of this report had a higher Delhi GDP number on the headline thanks to our use of GDP on current prices. While that was technically correct and the source is accurate (Delhi Government's Economic Survey) the GDP as per constant prices is what is commonly used and understood.

And we've subsequently used 2005 as a starting point for that. Our thanks to economist Dr Surjit Bhalla for pointing this out. We also changed the headline and are stating the obvious - how the social indicators seem relatively strong but crime, particularly against women is a key issue. To reiterate: no content in terms of data has been changed since the original publication of this article.