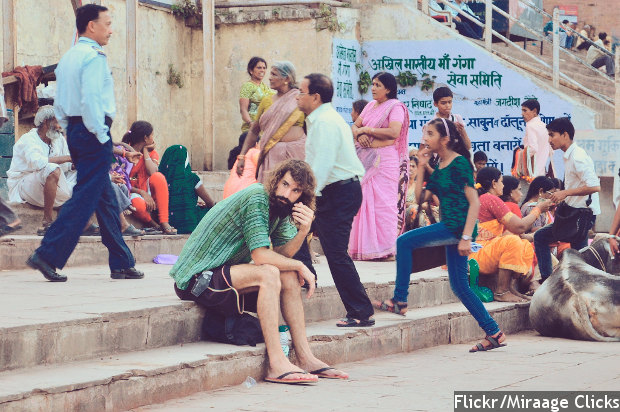 A foreign tourist looks on at a ghat in Varanasi. In 2015, 365 crimes against foreigners in India were registered, of which 223 were theft cases, according to National Crime Records Bureau data.

The gangrape of a 30-year-old American woman in a Delhi five-star hotel in April 2016--revealed when she returned to India and spoke up on December 6, 2016--has returned the spotlight onto Delhi’s notorious reputation as a city being unsafe for women.

The American said she was raped by her tour guide, two hotel staffers and two other men.

In 2015, 365 crimes against foreigners in India were registered, of which 147 (40%) were in Delhi, followed by Maharashtra (53) and Uttar Pradesh (33), according to National Crime Records Bureau (NCRB) data.

Of these 365 crimes, 271 were against tourists and the rest against foreigners resident in India. The number of crimes, however, was 25% lesser than the 486 registered in 2014.

61% of crimes against foreigners were thefts

Of the 365 crimes registered, 223 were theft cases, followed by assault with intent to outrage a woman’s modesty (23 cases) and forgery (15). There were twelve cases of foreigners being raped in 2015 nationwide, of which three (25%) were in Delhi.

Rape cases in Delhi increased by 284% in five years

It is not clear if rapes have increased or more women are reporting rape; it could be either reason or both. The rise in rapes reported can be correlated to the change in rape law--which was made more stringent, possibly leading to higher reporting--after the 2012 gangrape of a physiotherapy student, now widely known as Nirbhaya, which led to protests and outrage.

Rapes in Delhi tripled and the reform process promised after the 2012 Nirbhaya case had failed, IndiaSpend reported in August 2016.

In its India travel advisory for citizens, the UK government classified Delhi as potentially unsafe for women. Some of the advisories include: