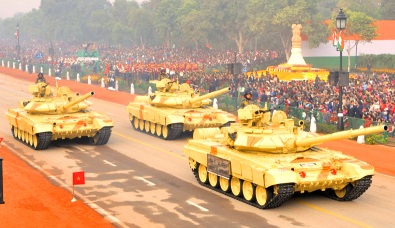 Geo-political uncertainty is rising again. After Russia’s unexpected annexation of Crimea, the world is on the edge again. And this time the stakes are much bigger.

In a situation like this, it’s worth looking around the globe to see how geared up the world’s military powers are.

Defence spending in general rises and falls as the environment alternates between peace and uncertainty. For example, the cold war period, as we all know, saw heightened defence spending while the fall of the Soviet Union led to cutbacks in spending.

After 1988, the USA essentially emerged as a single super-power and an era of relative peace prevailed.

Defence budgets kept falling until 2001 when the 9/11 terrorist attacks in America plunged the world into another era of hostilities, namely the war on terrorism. Total world defence expenditure has been on the rise since 2002.

According to information from The Stockholm International Peace Research Institute (SIPRI) the United States of America remains the largest spender in the world, spending more than all the next top ten defence spenders combined.

China’s increased military spending coincides with its increased aggression and assertiveness in the region - be it the controversial Air Defense Identification Zone (ADIZ) declared late last year or border disputes with India, both in Kashmir and the North East, and the territorial disputes with Japan over the Senkaku Islands.

On the other hand, India recently announced a 10% jump in its defence budget for 2014-15. Pension reforms – One Rank One Pension - were also proposed in the interim budget presented by Finance Minister P Chidambaram on March 17.

In 2012, India was ranked 9th in the world in terms of military expenditure while it was at the 10th position in 2002, a jump of one position in a decade.

China, during the same period, went from the 5th largest military spender in 2002 to 2nd in 2012, overtaking France, Japan and UK. Russia also had a rapid rise in position from 8th in 2002 to the 3rd largest spender in the world in 2012.

Saudi Arabia has the largest military expenditure as a percentage of the GDP followed by Israel. Since both these countries have troubled borders and hostile neighbours, it becomes important for them to have proportionally large military expenditures.

India is ranked sixth on this list, spending 2.5% of its GDP on defence. UK, France and China are lower down the list. India, in fact, spent more on defence as a percentage of the GDP in 2002 compared to 2012.

Pakistan, with whom India’s has troubled relations, is not on the list of top 15 military spenders. Pakistan had a military expenditure of $6.6 billion in 2012. It spent 2.7 % of GDP on military expenditure, which is slightly more than the proportional figure for India.

The rise of China as a regional and global powerhouse is going to be a concern for many countries in the west and especially for its neighbours including India.

One area where India competes with China is military expenditure. India’s armed forces, as we reported earlier, are facing twin challenges of insufficient modernisation and under-spending.

However, there are positives as well. India has embarked on an ambitious defence acquisition programme for all the three wings of the armed forces, which includes modern jets, aircraft carriers and submarines.

The question that remains is whether the military spending over the next decade or so will help India counter China’s influence in the region and to what extent. It’s not a question that can be answered anytime soon.

Data for the article has been sourced from The Stockholm International Peace Research Institute (SIPRI).