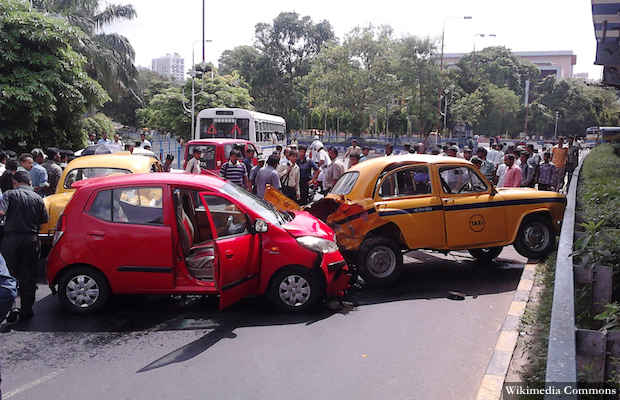 Afternoons are the most accident-prone hours on Indian roads: 85,834 of 480,652 (18%) accidents in 2016 were reported between 3 pm and 6 pm, according to a new government report, which does mention deaths or injuries during these hours.

Driving under the influence of alcohol/drugs resulted in 14,894 road accidents and 6,131 deaths in 2016, or 41 accidents and 17 deaths daily. The use of mobile phones while driving caused 4,976 accidents and killed 2,138 people; in other words, 14 accidents and 6 deaths every day.

Two-wheelers reported 34% of all vehicular accidents in 2016, 19 every hour

About 80% road users in India feel unsafe on roads, according to Road Safety in India - Public Perception Survey, a July 2017 report by SaveLife Foundation, a New Delhi-based non-profit.

About 54% of the 2,166 respondents across 10 cities felt that poor road conditions and faulty design lead to accidents while 74% said road contractors and engineers should be held responsible for deaths and injuries, the survey reveals.

The annual cost of road accidents in India is 3% of its gross domestic product (GDP), the SaveLife Foundation report said, quoting a 2014 report by the erstwhile Planning Commission of India.

“With India’s GDP in 2015-16 being Rs 136 lakh crore ($2,092 billion), these figures translate into a monetary loss of Rs 4.07 lakh crore ($62.6 billion),” the report said. “Ironically, it is over five times the budget of the Ministry of Road Transport and Highways, the nodal agency for ensuring road safety in India.”

Correction: An earlier version of the story erroneously referred to Chennai and Delhi as cities with more than 50 million population. We regret the error.