Three senior Indian Revenue Service (IRS) officers have been issued chargesheets and divested of their responsibilities, for their role in preparing a report that recommended higher taxes on the rich and an economic stimulus to fight the slowdown caused by COVID-19.

The senior officers and more than “50 young IRS officers” had suggested policy measures to the Central Board of Direct Taxes for its consideration. Issued on April 25, the report, Fiscal Options and Response to COVID-19 Epidemic or FORCE, had suggested higher taxes on the “super rich”, reintroduction of the wealth tax, and a COVID-19 cess among other measures. 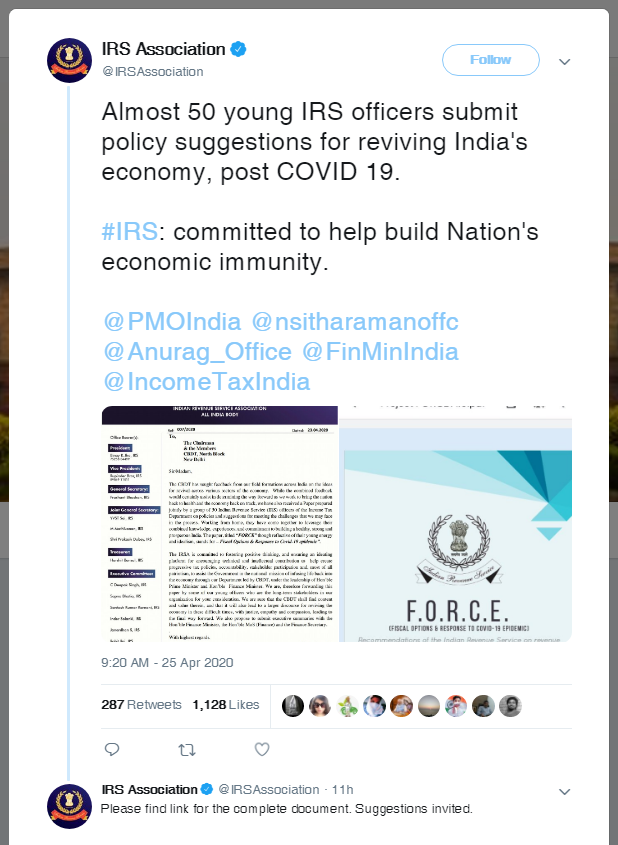 A screenshot of the tweet posted by the official Twitter handle of the Indian Revenue Service Association, which has since been deleted. An archived version is available here.

It was prepared to “find some more solutions, suggestions and options that will help with the treatment for the economic pain that the country is suffering”, it said.

The next day, the tax department issued a statement saying the officers had not been asked to prepare such a report, and that “no permission was sought by the officers before going public with their personal views & suggestions”. The report did “not reflect the official views of the CBDT/Ministry of Finance”, it added.

(1/3)There is some report circulating on social media regarding suggestions by a few IRS officers on tackling Covid-19 situation.
It is unequivocally stated that CBDT never asked IRS Association or these officers to prepare such a report.@nsitharamanoffc @Anurag_Office

The report proposed an increase in the highest tax rate to 40% for the “super rich”--whose total income is above Rs 1 crore ($132,000)--or the re-introduction of the wealth tax for those with net wealth of Rs 5 crore or more, as short-term measures for three to six months.

India’s richest “enjoy a higher capacity to pay with significantly higher levels of disposable incomes compared with the rest”, the report said, “their current levels of wealth itself is a product of the social contract between the state and its citizens.”

The nine richest Indians own wealth equivalent to the bottom 50% of the country. While the top 1% own 52% of national wealth, the bottom 60% own only 5%, IndiaSpend reported in January 2019.

COVID-19 has infected 29,435 people in India and killed 934, as of April 28. India’s growth projection for 2020 was estimated to be 1.9% in 2020 compared to 4.2% in 2019, the International Monetary Fund noted on April 14, highlighting that for the “first time since the Great Depression both advanced economies and emerging market and developing economies are in recession”. The advisory committee of the 15th Finance Commission had suggested that the projections of real GDP growth made before March 2020 had to be “relooked into entirely, and revised downwards considerably”.

While the FORCE report has drawn the government’s disavowal, the suggestion to tax the wealthy was also made by economist and Nobel laureate Abhijit Banerjee in May 2019 in an interview with IndiaSpend before the 2019 general election in context to an income support scheme suggested by the Congress. “I am all for more taxes on the rich, maybe we can look at some version of a wealth tax,” he had said. “There needs to be some thought on how much the wealthy population can be taxed.”

India had introduced a wealth tax in 1957 on individuals with a certain net worth or value of assets to reduce wealth inequalities. It was abolished in 2015, purportedly because enforcement had become difficult.

In the wake of the COVID-19 pandemic, the Centre on March 26 announced a Rs 1.7 lakh crore relief package for the poor, two days after it announced a 21-day countrywide lockdown (which was subsequently extended until May 3). On April 8, the Associated Chambers of Commerce and Industry of India, an industry body, recommended a stimulus package of at least $200-$300 billion to help the economy recover from the recession caused by the pandemic that has now engulfed more than three million people worldwide.

The IRS officers’ report also proposed a one-time COVID-19 relief cess of 4%, to be applied on those with taxable income greater than Rs 10 lakh, which could mobilise Rs 15,000-18,000 crore, the report estimated. In addition, it suggested tax incentives for CSR expenditure on disaster management.

The report further suggested that donations by companies to the PM CARES Fund and CM Relief Funds be allowed to be counted towards CSR not only for this year but also for the next year (2021-22). Companies that are not facing liquidity issues could be persuaded to contribute up to 4% of their estimated net profit for two years (instead of the 2% mandated currently).