COVID19-Like Animal-To-Human Diseases Set To Grow, Say Experts. Here’s What Can Be Done About It

Bengaluru/New Delhi: As destruction of habitat and biodiversity loss expose humans to more zoonotic diseases that spread from animals to humans, a key programme to study the spread of these diseases and suggest ways to control them has been in the works in India since 2018. Following a global framework, the programme could help governments minimise the impact of an outbreak and prevent an outbreak from turning into an epidemic, experts told IndiaSpend.

The One Health framework was officially recommended as an approach to deal with zoonotic infectious diseases by the World Health Organization (WHO) in 2008 by bringing together experts working in human health, animal health, plant health and the environment. The core components of the framework are food safety, zoonoses and antibiotic resistance.

In November 2018, the Indian government launched ‘One Health and Zoonoses’ (zoonoses being pathogens from animals that can also infect humans), its own interdisciplinary programme to study zoonotic diseases based on the WHO’s framework.

As a first step, the programme will identify 25 surveillance sites across India in infectious disease hotspots. “People will come together and map their expertise to say, for instance, that if a particular pathogen is associated with a particular tick vector and the ticks are found in these sets of hosts, what are the sites that could potentially allow these to come together and create hotspots,” said Abi T. Vanak, a senior fellow at the Ashoka Trust for Research in Ecology and Environment (ATREE), and lead of India’s One Health and Zoonoses programme.

Like the COVID-19 pandemic, at least 60% of some 335 identified diseases that emerged between 1960 and 2004 were transferred to humans from animals, as per a 2008 study, ‘Global trends in emerging infectious diseases’. Zoonotic diseases are responsible for 2.5 billion cases of human illness and 2.7 million human deaths worldwide each year, according to a 2017 study published in Emerging Infectious Diseases, a peer-reviewed journal.

COVID-19 is the latest in the coronavirus family (which includes the Middle East Respiratory Syndrome (MERS) and Severe Acute Respiratory Syndrome (SARS)), and is suspected to have originated from bats and/or pangolins. It has affected more than 339,000 people globally and killed more than 14,700, as on March 23. The disease is spreading fast in India, with cases having doubled over the three days to March 22 to 396, according to HealthCheck.in’s Coronavirus Monitor.

“When we cause deforestation due to various human activities like mining, logging, industrialisation, agriculture, we end up coming more and more into contact with a wider range of animals that are hosts to numerous pathogens (a bacterium, virus, or other microorganism that can cause disease),” said Vanak.

Livestock might also come into risky contact with wildlife and could, in some cases, act as intermediate hosts and transmit pathogens onward to people, as was the case with the Nipah virus when it emerged in Malaysia, Rory Gibb, ecologist at the Centre for Biodiversity and Environment Research at the University College London (UCL), told IndiaSpend.

The number of outbreaks of zoonotic infectious diseases such as COVID-19, SARS, Ebola and bird flu are rising, as per a December 2014 study, published in The Royal Society journal, which highlights the need for such research. The Nipah virus killed 17 people in Kerala in 2018, Ebola in West Africa killed over 11,000 people between 2014 and 2016, and the SARS in 2002-03 killed 774 people worldwide.

These outbreaks have shown new infections passing over into humans, and then rapidly reaching heavily-populated urban centres and moving around the world through air transport, Gibb said.

“India is a crowded country and we have massive interactions between people and animals,” said Vanak. “We also have many biodiversity hotspots, so the chances of emergence of novel viruses or even re-emergences and mutations of existing viruses that can cause a public health concern is quite high.”

Apart from widely known outbreaks such as Nipah, there are other zoonotic diseases such as the “scrub typhus and tick typhus in many parts of the country”, said S. L. Hoti, a scientist with the Indian Council of Medical Research’s National Institute of Traditional Medicine, who is also part of the One Health programme. Scrub and tick typhus are fever-inducing diseases transmitted via mites and ticks. 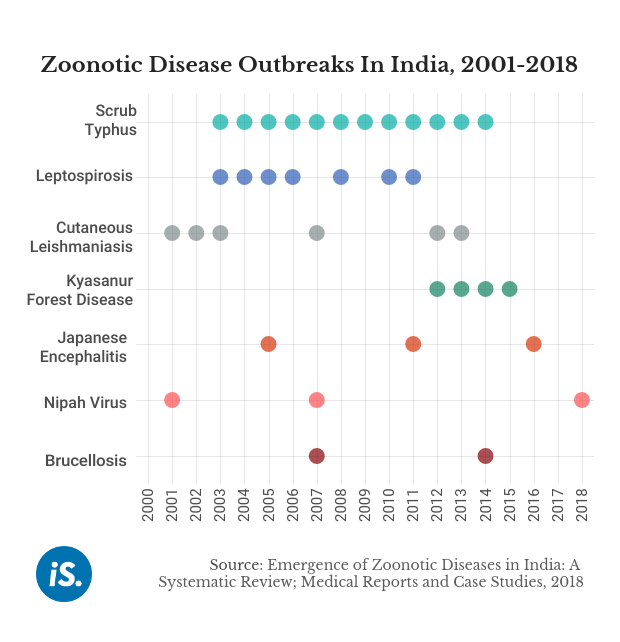 “If we do good interdisciplinary research, adopt inclusive and innovative conservation frameworks, feed the results into policies and plans, then the mission will have a significant positive impact on human well-being,” Ravi Chellam, CEO of the Metastring Foundation and director of the Mission Secretariat of the Indian programme, told IndiaSpend.

Air pollution might also exacerbate the impact of certain zoonotic diseases on humans, especially those that affect the respiratory system. Scientific evidence from past coronavirus outbreaks, including the 2003 outbreak of SARS, suggests that people living in polluted areas are more likely to die of such respiratory infections.

There’s also a good deal of evidence that changes to the climate in the future are likely to impact vector (disease-carrying organism) populations and how effectively they can transmit certain pathogens, but that these changes may vary geographically and over time, Gibb of UCL told.

For example, areas that become warmer and wetter in the future may become more suitable for dengue, chikungunya or malaria vectors, putting new populations at risk. But other areas may become too hot or too dry for those vector species to persist, or for their role in transmission to be as effective, he added.

The impact of climate change on these diseases is not solely about the exposure to such diseases. “In many regions, climate change is also likely to impact food security, poverty, and other socioeconomic factors that affect individuals’ and societies’ vulnerability to disease outbreaks,” Gibb said.

The One Health programme, by bringing together experts from public health, virology, epidemiology, genomics, ecology, social science and animal science, could help prevent an outbreak from turning into an epidemic.

India’s programme was approved by the Prime Minister’s Science, Technology, and Innovation Advisory Council (PM-STIAC) under the National Mission on Biodiversity and Human Well-being in November 2018.

Thereafter, consultations were held between experts from across the sectors of medical science, ecology, wildlife conservation and others from October to December 2019. The National Biodiversity Authority, the lead institution, submitted a detailed project report to the Ministry of Environment, Forest and Climate Change (MoEFCC), the nodal ministry, in December 2019, said Chellam.

But India lost several years of collaborative research because it was slow to start this programme, even after the WHO announced the One Health framework in 2008.

“They've been talking about One Health for several years, but if you listen to the talks, it is the same old stuff,” an expert on the One Health mission told IndiaSpend, on condition of anonymity. “The COVID response shows how little ICMR [Indian Council of Medical Research] understands about rapid response, surveillance, monitoring and modelling. Look at the composition of the COVID advisory team--it is mainly government institutions. No core virologists, modellers or international experts,” he said.

Currently, about 25-30 scientists from about 10 institutions are working on a one-year preparatory project, said Chellam. “The full-fledged mission will offer numerous competitive grants and fellowships and encourage partnerships and collaborations between various individuals and institutions,” he added.

Going forward, India and countries around the world have to prepare and implement holistic approaches that conserve biodiversity and reduce disease, experts suggested.

For example, ecological restoration of dammed rivers has been effective in reducing urinary tract and intestinal infections by parasitic flatworms in parts of Africa, while also helping protect local ecosystems, Gibb said.

In India, the MonkeyFeverRisk project focuses on the impact of the Kyanasur Forest Disease--a tick-borne viral haemorrhagic fever--on low-income communities in the Western Ghats. It has analysed past outbreaks and identified patterns of incidence in the future taking into account changing land-use patterns in nearby forests, climate change and societal change.

For instance, in 2006, Bangladesh formed a multidisciplinary team with experts from the Institute of Epidemiology, Disease Control and Research (IEDCR) and the International Centre for Diarrhoeal Disease Research, Bangladesh to track and investigate Nipah virus cases, according to the WHO.

These teams have identified sporadic cases and 11 outbreaks of Nipah encephalitis over 10 years to 2011, according to the WHO. Rapid response teams verify and investigate any cases reported in the media or on the IEDCR helpline. In addition, both organisations track cases in five hospitals in northwestern and central Bangladesh constantly, which are then investigated. This surveillance gives the government the opportunity to learn more about the disease and to focus on prevention as there is no known cure.

(Pardikar is a freelance journalist from Bengaluru and Tripathi is an IndiaSpend reporting fellow.)