Mumbai: The COVID-19 pandemic could disrupt the supply of medicines to tuberculosis (TB) patients, as airlines shut down and supply chains are hit, said officials of the World Health Organization (WHO), on World TB Day, March 24.

But the Indian government said it has enough drugs to last until March 2021 and India’s TB patients will not be affected. TB patients are also likely to have worse treatment outcomes than the general population if they contract COVID-19, the WHO said.

India is home to nearly three in every 10 (27%) TB patients in the world, a disease which kills an estimated 1,200 every day in India, according to the World TB report 2019. An estimated 2.7 million contract TB every year.

COVID-19 has spread to 168 countries with more than 378,000 cases and over 16,500 deaths, according to Johns Hopkins Coronavirus Resource Center. India has 471 confirmed cases of COVID-19 and nine deaths, as of March 23, according to HealthCheck.in’s Coronavirus Monitor. Maharashtra, now under a state-wide curfew, has reported a maximum of 74 cases, while Kerala, with 67, has the second most cases.

As a mitigation measure for COVID-19, state governments have announced a complete lockdown--with only essential services such as grocery stores and chemists open--in 30 states and union territories, according to a government press release.

India has already suspended incoming international flights and domestic flights will be suspended from March 25, 2020.

Before the COVID-19 crisis, we already had a stockout in the private sector (in some parts of India) of Clofazamine--an essential drug for drug-resistant TB, said Chapal Mehra, convenor of Survivors against TB, a patient advocacy group. "With the COVID-19 crisis, TB services and supply chains are bound to get affected...All this underscores the need to invest in public health, human resources and procurement mechanisms (independent of the government).”

“Airlines closing down is a big concern and it could affect the supply of drugs,” said Matteo Zignol, who heads the unit on research for TB elimination at the WHO Global TB Programme, during a Skype session with journalists ahead of World TB Day. “One of the dangers (of the disruption of drug supply) is an increase in drug-resistance among patients,” said Zignol.

If TB drugs are discontinued or not taken regularly, the bacteria that spreads TB could grow resistant. India is home to the largest proportion (27%) of patients with drug-resistant TB, followed by China (14%), where COVID-19 first began. Drug-resistant TB is more difficult and expensive to treat than regular TB.

“There are sufficient drugs till March next year [2021], we don’t see the possibility of a drug shortage,” Kuldeep Sachdeva, additional deputy director of India's Central TB division, told IndiaSpend. The government has said they will issue drugs for a month in advance so that patients have enough medicines with them even case of a lockdown, he said.

The government provides TB drugs for free if patients are treated in the public sector. But at least half of India's TB patients seek treatment in the private sector, as IndiaSpend reported in October 2018.

There may be a drug or two missing in the private sector but they are available in the government sector and patients can access them from government TB centres, Sachdeva said. 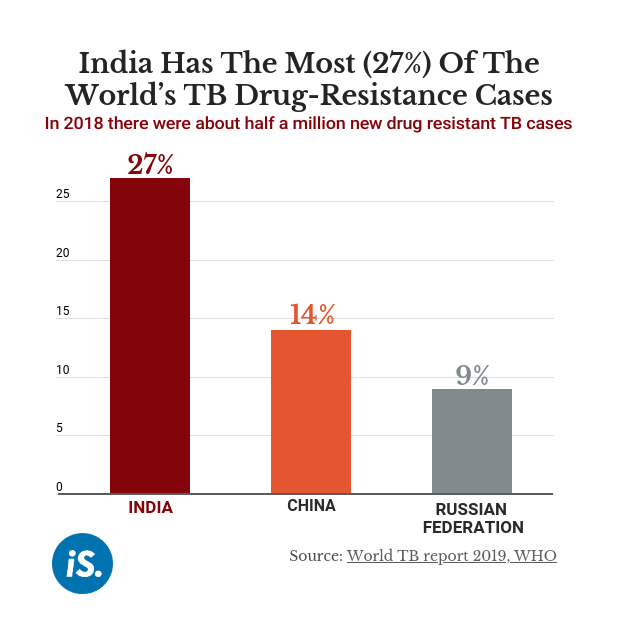 TB is spread by the air-borne mycobacterium tuberculosis and TB patients exhibit symptoms similar to those with COVID-19: cough, fever and difficulty in breathing. Both diseases attack the lungs, although TB could also attack other parts of the body, such as the bones and joints.

The key difference between the two diseases is that the incubation period (the time between exposure to an infection and the appearance of the first symptom) for TB could go up to 12 weeks versus the estimated two-week period for COVID-19.

One in four people globally have latent TB--they are infected with TB bacteria but are neither sick nor contagious--according to the WHO. Being infected does put them at a higher risk of developing active TB.

How COVID-19 will impact TB patients is not completely understood, but TB patients are likely to have poorer treatment outcomes than the general population if they contract COVID-19. “Patients with TB will have the worst outcomes for COVID-19,” warned Tereza Kasaeva, director of the WHO’s Global TB Programme.

“Patients should follow the recommendations from their countries,” Kasaeva said. India so far has no specific guidelines for TB patients at risk of COVID-19.

The precautions for TB and COVID-19 are the same. “So this [current precautions being taken for COVID-19] will help both patients,” Sachdeva said.

Like COVID-19, one of the ways to contain the spread of TB is by maintaining a safe distance from a patient. But this idea of physical isolation has been impractical in India where families live in one-room shanties with little ventilation in crowded urban slums and in small low-roofed houses in rural areas and tribal belts.

Because TB is infectious, it created a stigma around the disease and those with TB are often pushed out of homes or left to fend for themselves, said Anant Bhan, a bioethicist and health policy expert.

Physical distancing and isolation for COVID-19 could be more successful as it was only recommended for TB and not enforced, as is the case currently. In the case of TB, which takes at least six months to treat and the patient remains infectious for the first two weeks of the treatment, medical practitioners soon found out that the poorest had no social net and that they had to go to work.

“If the fear element [of the consequences of reporting TB or COVID-19] is too high, then people might hide symptoms,” said Bhan. “Social distancing won’t work for the daily wage workers...It will devastate families,” he added.

The physical distancing and lockdown due to COVID-19 has already had debilitating consequences for poor communities in Mumbai. “These are people with no savings whatsoever--they literally lead a hand-to-mouth existence,” said Arun Kumar, CEO of Apnalaya, an NGO that works in a dozen slum clusters of Shivaji Nagar, bordering Mumbai’s largest dumping ground.

Kumar said the coming months could see food insecurity in these communities and a rise in TB cases, as he expects malnutrition to rise. TB is closely linked to malnutrition, as IndiaSpend reported in May 2017. 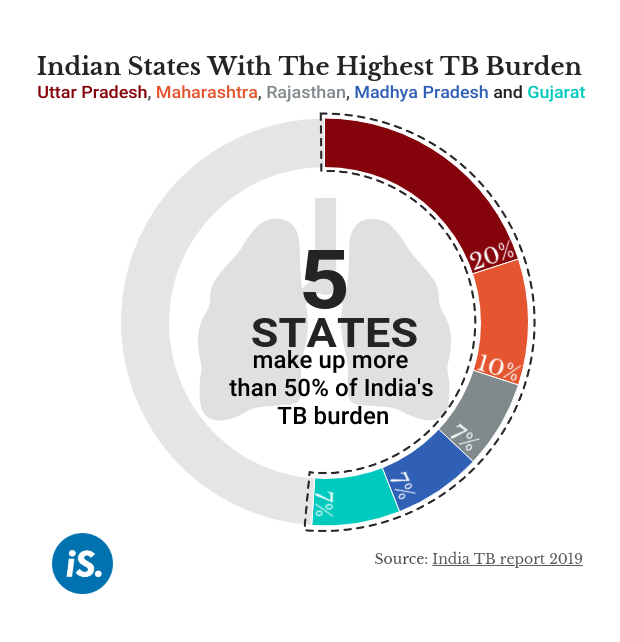 Lack of testing puts TB patients at risk for COVID-19

“We have a simple message for all countries: test, test, test,” said WHO director general Tedros Adhanom Ghebreyesus to countries on March 16, 2020.

Currently, the Indian government is testing for COVID-19 only those who have travelled from abroad, been in contact with a confirmed or high-risk case and have serious pulmonary issues, according to the latest guidelines released by the Indian Council of Medical Research (ICMR) on March 20, 2020.

Until March 19, 2020, India was only testing patients who had symptoms and had either come in contact with a confirmed case or travelled internationally. Experts criticised the restrictive criteria for testing, warning that additional testing was required to detect COVID-19 faster and prevent its spread, as IndiaSpend reported on March 19, 2020.

Those who travelled internationally are at the crux of the response, as COVID-19 started in China and has impacted the US and Europe. Once back home in India, these flyers also interact with their domestic workers and drivers, who might not be at the top of the list for a COVID-19 test, which costs the government Rs 5,000, as we reported on March 19, 2020.

Private labs will restrict the cost of a test to Rs 4,500, the government said on March 21, 2020, but this is still unaffordable to most Indians, 21% of whom lived below the poverty line of $1.90 a day in 2011, according to the World Bank’s latest Indiawide data.

The odds that someone from an area such as Govandi would be offered a test is negligible, said Kumar from Apnalaya. “From the day one, Apnalaya has been talking about the need to have a differentiated approach [such as financial help] for COVID-19,” said Kumar. “These [poorer and those already suffering from TB] communities are going to be impacted even without the virus,” he said, referring to the economic impact.

Kerala has announced a Rs 20,000-crore relief package for those affected by COVID-19, including loans and advance disbursement of welfare pensions, as IndiaSpend reported on March 20, 2020. West Bengal has announced free rice and wheat for those below poverty line, Uttar Pradesh has announced a one-time direct cash transfer of Rs 1,000 to daily wage workers and Telangana has announced that it will distribute 12 kg of rice per person and provide a one-time cash support of Rs 1,500 for 87.59 lakh food security card holders.

Update: This story has been updated with comments from India’s central TB division to reflect that the Indian government says it has drugs until March 2021 and Indian TB patients will not be impacted by a drug shortage.

(Shetty is a reporting fellow with IndiaSpend.)