COVID-19: Insurers Are Denying Policies To Disabled Despite Govt Strictures

New Delhi: Abishek Muthian, a startup coach from Coimbatore, runs a blog on which he has uploaded many hours of phone conversations and several emails with call centre and back-office agents of Indian insurance companies. The anxiety over high healthcare costs during the COVID-19 pandemic prompted him to seek out medical insurance. But company after company declined to sell him a policy.

Muthian, 34, lives with dwarfism. Since late March, he tried to buy medical insurance from five leading companies--Royal Sundaram General Insurance, ICICI Lombard General Insurance, HDFC Ergo, Bajaj Allianz and Max Bupa. All five declined his request on grounds of his disability. This, despite various government circulars directing firms that people with disabilities must not be denied medical insurance.

The COVID-19 pandemic has exposed several faultlines in our health systems: Private healthcare is expensive while public healthcare can be inadequate. IndiaSpend has reported on various aspects of this issue in The Price of COVID series.

Health insurance could be a relief for anyone who needs to access private hospitals. But as IndiaSpend has reported, many with valid health insurance were not able to claim it for their COVID-19 treatment during this pandemic. Insurance companies offered many reasons for rejecting claims ranging from over-charging by hospitals to telling claimants they had not needed hospitalisation.

In our ninth investigation of the series, IndiaSpend attempts to document the challenges faced by people with disabilities in buying medical insurance and how they were routinely denied policies by India's leading insurance companies. The pandemic has brought new anxieties and reinforced old ones for people with disabilities: Would they be able to afford treatment and healthcare, for COVID-19 or anything else, without medical insurance?

On his blog, he chronicles his experiences with various companies. He has documented how Royal Sundaram wrongly listed his disabilities and health parameters. The company did not give him a copy of his medical reports until after repeated complaints. Those reports certified him as healthy, yet the company did not issue him a policy. HDFC Ergo told him they could not insure people who had had accidents. Muthian has not had any accidents. The company also automatically rejected his application after he filled up a form online and declared truthfully that he had a disability. ICICI Lombard declined citing his pre-existing "illness", even as Muthian told them that that is against the government guidelines. All three companies had initially accepted payment from Muthian for a policy but never issued him one, refunding the money after several emails and complaints, Muthian told IndiaSpend. 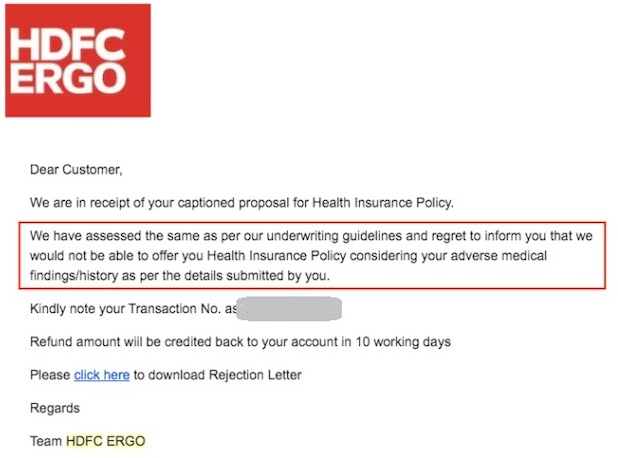 Copy of one of the rejections received by Muthian, for medical insurance, citing his dwarfism as a ground for denial

"My disability is not among those listed as permanent exclusions by the Insurance Regulatory and Development Authority of India (IRDAI). IRDAI guidelines ask people to honestly declare their 'pre-existing illness' and ask that insurance companies not deny people coverage due to this. I have always honestly declared my medical condition. Several insurance companies also claim to offer insurance to people with pre-existing illness and disabilities. Yet, I have not managed to buy medical insurance," he said.

A person should not be denied insurance because of their disability or pre-existing illness, IRDAI guidelines state. The guidelines say that if need be, their particular disease can be excluded from coverage with a longer waiting time (upto a maximum of four years), but the rest of their bodies would still be eligible to be covered by medical insurance. After this waiting period, even the particular disease could be covered by the insurance policy.

"Insurance companies should make a distinction between disabilities that compromise on the healthiness and life of the person and ones that do not," said Sanjay Datta, ICICI Lombard's chief of underwriting and claims division. "For example, blindness or an orthopedic disability may not actually be affecting all other organs or the life of a person and so these people should be considered for insurance. But for someone with an auto-immune disease… this is a difficult risk for our industry to take on. But all people with disabilities should not be lumped together," he added.

An insurance executive, who did not wish to be quoted, cited the example of the scientist Stephen Hawking. "He had a degenerative motor neurone disease. It would be difficult to insure him," he said and went on to recount the story of British general Lord Nelson, who led the British to victory against Napoleon in the Battle of Trafalgar in 1805. "Nelson was said to be blind. When his troops came to him fearing defeat, the story goes that he put a telescope to his blind eye and reassured them of what was ahead... a disability like blindness, need not be a hindrance in the performance of the person and a reason to exclude them [from insurance] in any way."

"Health insurance should be given to people with disabilities without bias," said S. Prakash, managing director, Star Health and Allied Insurance. But, he added, the industry in India often does not approach people with disabilities with "medical wisdom" and thus treats all disabled people as unhealthy. "This apprehension in the mind of the insurers is mostly not correct."

Insurance companies are not actively denying policies to people with disabilities, said G Srinivasan, director, National Insurance Academy, Pune. "It would not be correct if they are doing this as the regulator has also made this clear. There might be problems at the initial level, but not if people complain to the companies. So people should push for it and try to get insurance."

Muthian has raised multiple grievances with IRDAI for each of the companies who have denied him insurance and also complained directly to the insurance companies. Nothing has worked for him yet. He is tired, he said, but in one last-ditch attempt he wants to try and file a case at a consumer court.

"But if insurance companies are going to keep denying people with disabilities from policies, do we all have to go to court, one by one, to buy a policy?" asks Muthian.

Some 26.8 million Indians, or 2.2% of the population, live with disabilities, according to Census 2011. These include persons with visual, hearing, speech and locomotive disability, mental retardation, mental illness, multiple disability and any other disabilities. Disability is higher in rural areas (2.3%) than urban (2%) and higher in men than women (2.4% versus 1.9%), according to the National Sample Survey 2018.

While the IRDA publishes large amounts of data, especially about the amount of money paid and number of claims cleared by insurance companies, it does not divulge how many policies are denied.

In 2018-19, 20.68 million health insurance policies were sold and 472 million people were covered by health insurance in India, according to IRDAI data (TABLE 72). But no breakdown is given of how many applications insurance companies received, and how many they rejected.

These data become more significant because, in 2019, the IRDAI had asked all insurance companies to make public their "underwriting philosophy" for people with disabilities, mental illness and HIV/AIDS. Many companies, as mentioned above, have posted articles on their websites saying they provide insurance cover to people with such medical conditions.

Insurance company executives told IndiaSpend that the IRDAI has not asked them to capture these data. Muthian says that if IRDAI asks companies to collect these data, just this mere requirement could make them give out more policies to people with disabilities, so that this shows up in their data.

"They claim they will provide insurance to us, but our applications are rejected outright. Is this not a false promise and fake advertising by these companies?" said Muthian referring to such articles. "If this is not false, then companies should release this data."

IndiaSpend contacted grievance officers of 50 insurance companies listed on the IRDA website asking them for data on the number of applications from people with disabilities/pre-existing illnesses and how many had been rejected or granted a policy. We have also emailed IRDAI with queries about its audit, if any, of insurance companies' compliance with its guidelines on inclusion of people with disabilities. We will update this report when they respond.

"There is a need to encourage all insurance agencies to cover persons with disabilities without exception," declared India's National Policy for Persons with Disabilities in 2006. That policy said that the Life Insurance Corporation of India (LIC) provided insurance to people with specific disabilities.

That was what 35-year-old Prabhu, who goes by one name, was trying to find out recently when he filed a Right to Information (RTI) request with the LIC asking what types of insurance were available to people with disabilities for COVID-19 treatment. But in its reply, LIC said they could offer term insurance to cover the event of death of a person with disability due to COVID-19, but did not clarify if they offered any medical insurance for the same person.

Prabhu is a practising doctor at Tirunelveli, Tamil Nadu, and filed the RTI because his friend, a 34-year-old dentist, in Coorg, Karnataka, had asked him if there were any insurance policies that she could buy. Both Prabhu and his friend have physical disabilities in their lower limbs. 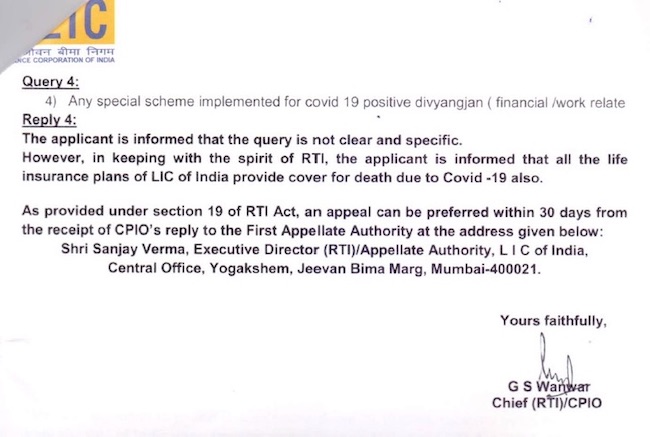 Copy of RTI reply received by Prabhu in Tamil Nadu, regarding insurance for people with disabilities by LIC

"During this pandemic, I got worried that my parents should have some insurance if something happens to me… COVID-19 is a risky disease," the dentist said. She enquired at her local State Bank of India branch about their insurance policies for people with disabilities. "I was told I would have to get a medical check-up in Mysore. They wanted me to travel over 100 km away for this. I feel this particular condition was set in order to dissuade me from availing the insurance." Her entire family is precariously placed on the issue of insurance. Neither she nor her elderly parents have any medical insurance.

Why government jobs are key

The security of government jobs and healthcare is how many people with disabilities have been managing, explained Danish Mahajan, 32, a junior clerk with the Punjab government.

Mahajan, who also runs an online radio station as a hobby, is blind. His wife is blind as well. With anxiety over the pandemic playing on his mind, he decided to buy medical insurance and approached Aditya Birla Health Insurance in October. "They simply denied me and my wife a policy- They did not ask us to do a health check up and the only documents we submitted were the disability certificates of our blindness... I am blind but the rest of my body is fine. Why can I not get medical insurance?" said Mahajan, who had been declined insurance earlier too -- by HDFC Ergo in 2019.

"Since I have healthcare from the government, I did not pursue this too much. But now this year I have complained to the commissioner for people with disabilities about being denied a health insurance policy," he said.

Like thousands of others, he is waiting for a reply.

(Bhuyan is a special correspondent at IndiaSpend.)