Countries Where Homosexuality is Criminalised

This latest judgment will mean that the matter is now out of the judicial purview and the activists will have no option but to knock on the doors of the parliament for a change in the law.

Earlier IndiaSpend reported about the December 2013 judgment which overturned the much celebrated Delhi High Court judgment of 2009 which decriminalized homosexuality in the Naz Foundation case.

India has now joined a host of countries around the world Homosexual Acts are illegal. Let us take a look at countries with criminal laws against sexual activity by lesbian, gay, bisexual (LGBT) people presented by International Lesbian Gay Bisexual Trans and Intersex Association (ILGA).

The countries we share our borders with which have criminalized homosexuality are: Afghanistan, Bangladesh, Bhutan, Myanmar, Pakistan and Sri Lanka.

According to the May 2013 report of ILGA, 76 countries have criminalized homosexual act. With the addition of India this list grows to 77 countries. The legal status of homosexual acts in Iraq is unclear. 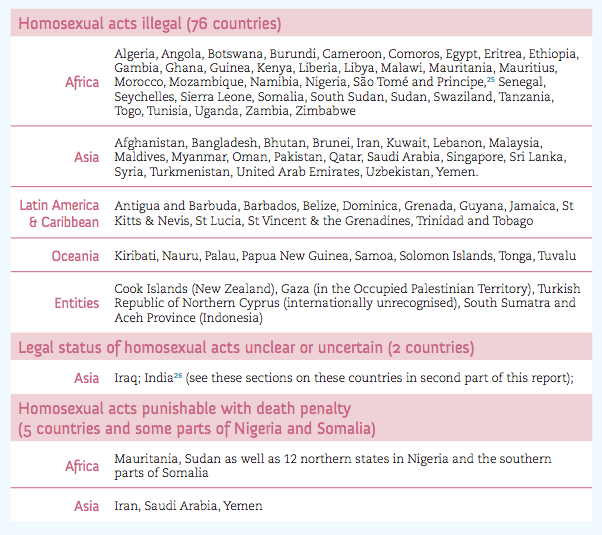 If entities like Gaza (in the Occupied Palestine Territory), Turkish Republic of Northern Cyprus (internationally unrecognized), and two large provinces of Indonesia are included, then the total comes up to 83 countries.