Countries Are Getting Better At Preventing Flood-Related Deaths. Not India. 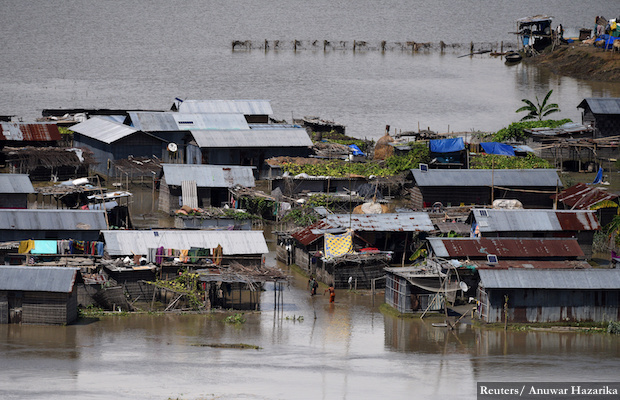 Nearly 14% of India's landmass is vulnerable to flooding and more than 15% of this area gets flooded every year. Since 1953, 1,600 lives have been lost every year on average due to floods.

Yet, the central government has not released 61% of the funds promised for flood management between April 2007 and March 2016, and 43% of the 517 works approved have not been completed, a recent report by the Comptroller and Auditor General (CAG) of India, the government's auditor, has found.

In eight of the 17 states and UTs, the flood management programme (FMP) was not undertaken in an "integrated manner" that would cover the entire river or tributary, and there were delays ranging from 10 months to 13 years in completion of FMP works, which rendered technical designs unusable by the time funding came through, the report said.

In all, the measures taken to reduce flood damage were ineffective.

How vulnerable is India?

As much as 45.64 million hectares (m ha), or 14% of India's landmass, is prone to floods, according to government data cited in the CAG report. On average, an area of 7.55 m ha (16% of the total flood-prone area) is affected by floods every year.

Between 1996 and 2015, India reported the fifth highest number of deaths due to disasters, more than a third of which (35,325, or 36.1%) were caused by flooding. During this period, it recorded 97,691 deaths, lower only than Haiti, Indonesia, Myanmar and China, according to data from the United Nations Office for Disaster Risk Reduction (UNISDR). 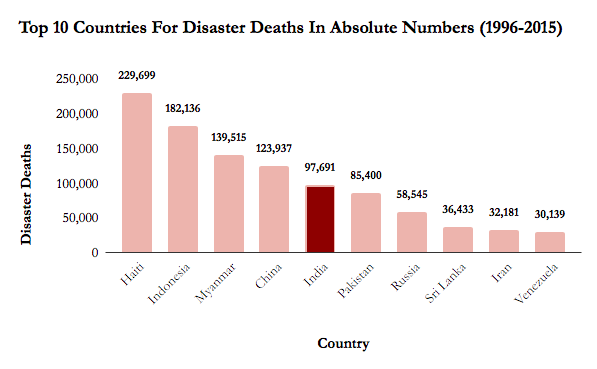 Countries had halved the number of people killed per flood to an average of 34 per flood event during the 10 years to 2015, down from an average of 68 during the previous 10 years, a 2015 UNISDR report said. The reduction was largely due to adoption of affordable technologies like dams and dykes, as well as better forecasting.

In contrast, flood mortality in India has been rising.

Due to unprecedented floods across Assam, Bihar and West Bengal in 2004, the federal cabinet of ministers had approved a Flood Management Programme (FMP) in 2007 to spend Rs 8,000 crore (2007-12) and Rs 10,000 crore (2012-17) as per recommendations of a task force. These measures would include programmes for river management, drainage management, and flood and erosion control.

The Central Water Commission (CWC) of the Ministry of Water Resources, River Development and Ganga Rejuvenation runs a network of 221 flood forecasting stations which issue 6,000 flood warnings every year on average. Over 98% of these warnings are accurate, government data show.

Forecasting is recognised as an important non-structural measure to manage floods and provide advance warnings to vulnerable areas, and includes both level forecasting (to decide on mitigation measures such as evacuation) and inflow forecasting (used by dam authorities to decide safe release to downstream areas and ensure adequate storage for non-monsoon months), the CAG report noted.

However, experts say, these forecasts are not adequately communicated to vulnerable populations. "In most cases we are caught almost unaware. Communication to downstream areas does not happen, or if there is, it is not effective," DC Goswami, retired head of the Department of Environmental Science at Guwahati University, told IndiaSpend. He said the civil administration must create a foolproof communication system to enable people to take precautionary measures, and that the necessary technology and systems exist. "Without this, people's vulnerability increases, and their losses compound," he said.

To automate the communication of forecasting, the CWC planned to modernise the existing infrastructure, provide automated equipment in 219 older stations and establish 222 new telemetry stations during 2007-12. The installation of 222 new stations was only completed in June 2013 after a delay of over two years (26 months), the CAG found.

Further, 222 of the 375 (59.2%) of the telemetry stations scrutinised by the CAG were non-functional for a variety of reasons including theft of equipment, non-installation of parts like radar sensors, and equipment having been washed away.

"CWC did not depend on telemetry data even after investing in modernisation of telemetry station network for nearly 20 years. This defeated the purpose of establishment of telemetry equipment for meeting the requirement of real time data collection, its transmission and flood forecast formulation," the report said.

India has seen much flooding in cities in recent years due to expanding population, encroachment on drainage channels, improper waste disposal that clogs drains and increased runoff from nearby water channels, a September 2016 report by the National Institute of Urban Affairs said.

When the effects of climate change are added to the equation, Indian cities are clearly unequipped to cope, as IndiaSpend reported in August 2017.

The Annual Survey of India's City-Systems (ASICS) 2016, a study on the status of urban governance by the non-profit Janaagraha, rated 21 Indian states on parameters including urban planning and design, and urban capacities and resources. All cities scored between 2.1 and 4.4, low when compared with cities like London and New York, which scored 9.3 and 9.8, respectively.

Delhi, the national capital, had a lower score compared with Mumbai and Chennai, which have experienced devastating floods.

Most cities display poor service delivery. Ideally, 100% of urban households should have drainage connectivity, but actually 55% do not, the ASICS report showed. Less than 20% of the road network was covered by a storm water drain network, an absolute necessity of good city planning. 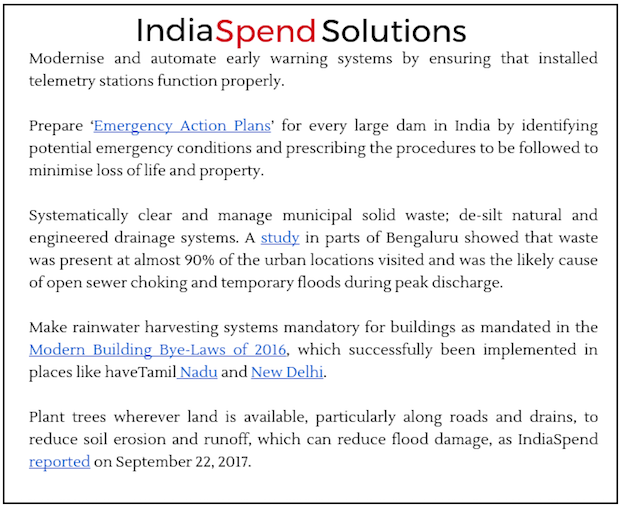 (Patil is an analyst and Nair is an intern with IndiaSpend.)