Congress's Claim Of 25,000 Toilets Built A Half Truth. 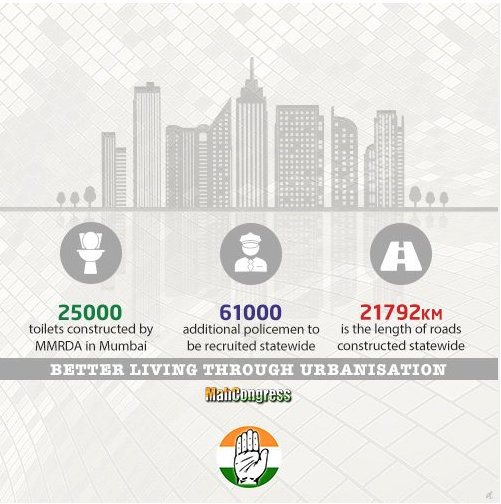 Maharashtra, India’s second-most populous and the richest state, is gearing up for elections to a new legislative assembly on October 15. With both the major alliances, Congress-Nationalist Congress Party (NCP) and the Shiv Sena-Bharatiya Janata Party (BJP), coming unstuck, the elections are expected to be multi-cornered fights in most of the 288 constituencies.

The ruling Congress started issuing advertisements prior to the split (or in anticipation of the split), and have been making claims on almost all issues – child health, poverty reduction, housing for poor and help to farmers. And the thrust of the party’s campaign is 3-fold: Housing. Education. And Jobs.

IndiaSpend decided to do a series of Fact Checks on the claims put forward by the Maharashtra Congress/Government:

The ad with a catch line – Better Living Through Urbanisation – claimed that with a number of projects already completed and several nearing completion, the life of people in Maharashtra has improved greatly. Is it true?

Mumbai Metropolitan Regional Development Authority (MMRDA), which the Government claims, has built 25,000 toilets in Mumbai has released a different picture:

According to the project features on the website of MMRDA: “Mumbai Metropolitan Region Development Authority has constructed 1,283 sites of 25,466 seats in two years and handed over to the people in the slums. One toilet seat is generally used by 40 people, which means daily about 1,00,000 people are using these toilets. In these blocks there are separate arrangement for male, female, senior citizen and handicapped, and bathrooms are also available, especially for women. In these community toilet blocks, separate electric and water supply are provided. For 24 hours cleaning and maintenance of toilet, resident accommodation facility has been provided for caretaker. Hence almost 1,200 people have got employment.”

MMRDA clearly states on its site: "It was decided to construct about 24,000 toilet seats at the estimated cost of Rs 300 crore in the jurisdiction of five municipal corporations and 13 municipal councils falling in the jurisdiction of Mumbai Metropolitan Region excluding Municipal Corporation of Greater Mumbai and Navi Mumbai Municipal Corporation. The actual construction of community toilet blocks started in March 2008. In the first phase, 574 sites of 11,572 seats are constructed. In the second phase, 709 sites of 13,894 seats were completed and handed over to community people."

So, what is the current status of the project? So, while MMRDA has built the promised 25,000 toilet seats, the point is this: none of this is in Mumbai because MMRDA was clear that Mumbai and Navi Mumbai municipalities were excluded from the programme.

The question therefore is: Was the Congress think-tank wrongly briefed about the numbers? Or are they just putting out the numbers in an effort to show that they are ahead of the Narendra Modi Government’s Swachhta Abhibyan?

As IndiaSpend reported earlier, thus far, the Congress has been predominant in Maharashtra: of 17 Chief Ministers since the state was created in 1960, 14 have been from the Congress. The three non-Congress Governments were led by Sharad Pawar (1978-80) and the Shiv Sena, between 1995 and 1999 with Manohar Joshi and Narayan Rane as Chief Ministers.

Will Congress be fourth time lucky and continue their governance in Maharashtra? Or is Maharashtra headed for a hung assembly, as seen by political expert Kumar Ketkar?