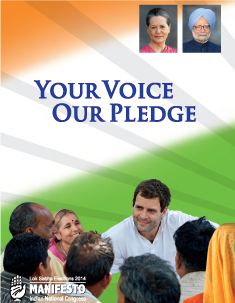 So, growth, inflation control and positive economic signals from the Grand Old Party (GOP) could set the tone for discussions ahead of the nine-phased general elections for 543 Lok Sabha seats scheduled to start from April 7.

Rahul Gandhi, while addressing the media after the release of the manifesto, said, “The manifesto we have here is truly the voice of the people of the country. Instead of having discussions behind closed doors, we asked people for their suggestions. We interacted with businessmen, women, coolies, youth to ask them what to put in the manifesto.”

Here are some key takeaways from the manifesto:

2) Enact health as a right to provide quality healthcare

3) At least 25% women personnel in every police station

Continuing its economic focus, along with social and political promises, the Congress manifesto is pledging to spend $1 trillion (Rs 61 lakh crore) to upgrade infrastructure across the country.

And in an attempt to woo over 375 million urban voters, the Congress party has made big promises: "We will ensure that Mayors and Municipal Chairpersons will have fully functional powers so that they can operate as Chief Executives Officers of cities, with executive powers and responsibilities."

The main opposition party, Bharatiya Janata Party (BJP), has slammed the Congress and the Congress-led United Progressive Alliance (UPA) Government at the Centre. "The Congress-led UPA is slipping on all fronts. The people of India are disappointed with the Congress," Rajnath Singh, president of BJP, said.