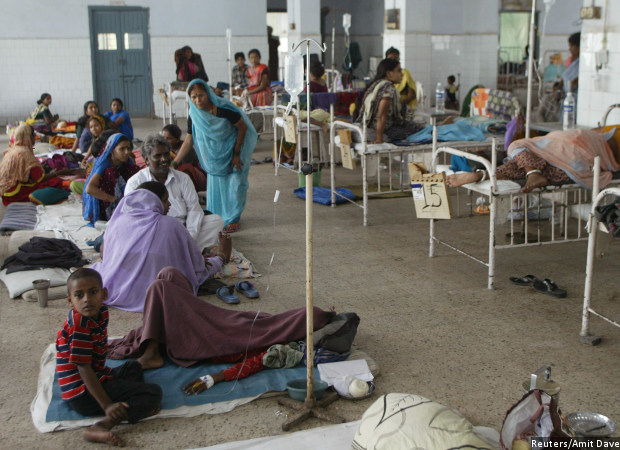 Spending on programmes to control India's three main communicable diseases—malaria, tuberculosis and leprosy—increased 7% over five years while cases reported, taken together, increased 32%, according to an IndiaSpend analysis of government data.

There has been a steady increase in the incidence of communicable diseases over the last five years, except malaria which saw a 14% decline, which can be attributed to a special focus on awareness and detection.

We found a correlation between cases reported and budgets over five years. As funding rose, cases declined.

The programmes are funded under the National Health Mission, which also includes programmes for child- and maternal-health, health infrastructure, prevention, early detection, diagnosis and treatment.

In dollar terms, the allocation declined from $3.2 billion to $2.9 billion. There has been an increase in the exchange rate from Rs 51 per dollar in 2011-12 to Rs 65 per dollar in 2016-17. The value of Indian money to dollar has depreciated over the last five years.

The National Vector-Borne Disease Control Programme covers malaria, dengue, chikunguniya and Japanese encephalitis, and also works for the elimination of Kala-azar and Lymphatic Filariasis. The allocation to the programme has seen a 3% decline, from Rs 482 crore in 2011-12 to Rs 463 crore in 2015-16.

While malaria cases declined 14%, dengue cases increased more than four times, chikunguniya and Japanese encephalitis rose 33%, according to a reply in the Lok Sabha (lower house of Parliament).

The tuberculosis-control budget rose 23% between 2011 and 2016, while cases reported almost doubled over the same period.

While there was a 16% decline in funding for the leprosy eradication programme, there was a 36% increase in leprosy cases nationwide.

There are also a host of other reasons, including dearth of awareness and access to medicine and treatment, which may have contributed to the rise of communicable diseases.

In 2012-13, states received only half the funds budgeted for vector-borne diseases and leprosy.