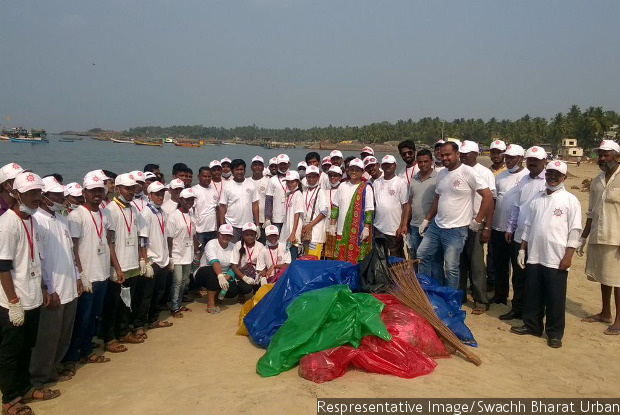 If you are happy with your city's cleanliness and want it to be recognised, it might be a good idea to begin by downloading a government mobile phone application.

Citizen engagement appears to be driving national cleanliness rankings more than municipal claims and independent verifications, according to an IndiaSpend analysis of 20 cities in the 2017 Swachh Survekshan (Cleanliness Survey) report released by the ministry of urban development (MoUD).

The government evaluated cities’ performance on citizen engagement through a mobile application ‘Swachhata-MoUD’--which can be downloaded from the Google Play Store--for a maximum of 150 points of the total 600 points for “citizen engagement”.

Of the 20 cities that IndiaSpend studied, 13 scored 85 points and above in the “Swachhata App” sub-category. Nine of these saw an average rise of 10 ranks over 2016. The seven cities that scored 80 points and below fell 36 ranks behind, on average, the analysis showed.

“The Survekshan methodology needs a serious relook as it is rewarding cities with environmentally unsustainable practices and discouraging cities working towards behaviour change and local solutions,” Chandra Bhushan, Deputy Director General, Centre for Science and Environment, a New Delhi-based environmental think tank, was quoted as saying in this Financial Express report.

“The methodology used to rank cities appears flawed” due reasons such as to leaning heavily on declarations made by municipalities, mistaking relative outcomes for absolute values and the vulnerability of citizen feedback to manipulation, the Hindustan Times reported on May 7, 2017.

The Swachh Survekshan report is an annual exercise by the ministry of urban development to measure the progress of the Swachh Bharat Abhiyan (Clean India Mission) launched by Prime Minister Narendra Modi in November 2014.

Unlike in 2016 when the report assessed 73 cities, 434 cities have been assessed this year and ranked on the basis of cleanliness and sanitation.

The MoUD modified the scoring pattern for ranking cities on cleanliness this year: It transferred 100 points previously allotted to “municipal documentation” to “citizen engagement”.

Municipal documentation refers to urban local bodies’ (ULBs’) assessment of their own infrastructure efforts on collection, transportation and disposal of solid waste, and strategies for open defecation-free towns.

Citizen engagement consists of two parts: Online, telephonic and social media surveys, and the use of the Swachhata App for citizens to connect with their ULBs. The app, as we said, carries 150 points, which accounts for 25% of citizen feedback points (600 points) and holds 7.5% weightage in the overall scoring of 2,000 points.

The app, which seeks to connect urban local bodies with citizens to identify and solve local waste management issues, has been downloaded up to 1 million times, according to data from the Google Play Store. For perspective, India has 367.48 million internet subscribers while its urban population is over 377 million.

Citizens can post a complaint of garbage pile-ups and mismanagement by taking a picture and posting it through the app. The app captures the location and forwards it to the concerned city-corporation after which it is assigned to the concerned ward-level sanitary inspector. Citizens can also check the status of their complaint.

Weightage for the third parameter “direct observation”--on-ground inspection of actual work carried out to improve sanitation and hygiene--remained unchanged at 500 points.

Gujarat and Madhya Pradesh have emerged as the top two states with most number of clean cities, 12 and 11, respectively, in India’s top 50 clean cities, IndiaSpend reported on May 5, 2017.

While higher scores on documentation and observation did not necessarily translate to better rankings, Swachhata App and citizen engagement scores seem to be directly correlated to city rankings, an IndiaSpend analysis showed.

We analysed the scores and ranks of 20 cities--the top 10 cities of 2016 and 2017, and those declared as “fastest moving” with a population of over a million.

Tirupati, which did not feature in the 2016 Swachh Survekshan report, was ranked ninth in 2017 after scoring the highest (135/150) in the Swachhata App sub-category.

Indore and Bhopal, which hold the first and second ranks, respectively, jumped 24 and 19 spots ahead from 2016, scoring 120 and 130 points on the App.

Indore, while failing to achieve top scores in other parameters, scored over others in the “citizen engagement” parameter to bag the title of the “cleanest city in India”.

Bhopal ranked second overall, and holds the second-highest score in the Swachhata App (130). The two Madhya Pradesh cities held the 25th and 21st ranks in 2016.

Vishakhapatnam showed the highest number of citizens engaging with the ULB--190,000--among the cities considered for the study, and rose from fifth to third rank in 2017. The port city scored 90 on the Swachhata App.

Of the cities that figured in the list of top 10 cities of 2016, only half remained in the top 10 in 2017: Chandigarh, Rajkot, Pimpri-Chinchwad, Gangtok and Greater Mumbai dropped below the 10th rank.

Better scoring on “municipal documentation” did not lead to improved rankings: Chandigarh scored the highest (883 on 900) among all cities in the study, but dropped nine ranks to 11th in the 2017 report (from second place in 2016).

High scores on “direct observation” did not yield better results. Mysuru, ranked first in 2016, fell to fifth rank in 2017 despite scoring the third highest (460 on 500) on this parameter. It scored 0.32% lower than the previous year.

Referring to Mysuru, which had also topped the rankings in 2014, urban development minister M Venkaiah Naidu asserted that it did not imply cleanliness has declined in the city. “The spirit of competition is sought to be promoted through such surveys to help cities know where they stand in absolute terms and in relation to other cities as well.”

While the report does not offer explanations for the decline of the top 10 cities in 2016, Indore’s efforts in sanitation lauded in the report ranged from segregating waste to using plastic waste for road construction and repair. It also praised the city for drawing “graffiti on walls” to spread awareness and for “composing melodious jingles to encourage mass participation which plays in the garbage collection trucks as they traverse the city”.

The efforts of Bhopal, Visakhapatnam and Surat mentioned in the report range from converting waste to energy and practising on-site composting to erecting "Asli Tarakki (real progress) hoardings and awareness by Swachhatagrahis”.

At the fifth spot, Mysuru’s sanitation and hygiene endeavours, as described in the 2017 report, are nearly the same as its competitors ranked ahead. While the southern city, unlike the top four, does not track its garbage collection vehicles with global positioning system (GPS) or engage informal waste-pickers (Bhopal does not do this either), the report praises its unique efforts to privatise garbage collection and transportation.

Dry and wet waste segregation at source for residential and commercial

More than 70% wards notify users about charges and collect them

More than 75% wards notify users about charges and collect them

80% of total waste is transported

Individuals took responsibility on themselves

Erect hoardings in every ward

Graffiti on wall for awareness