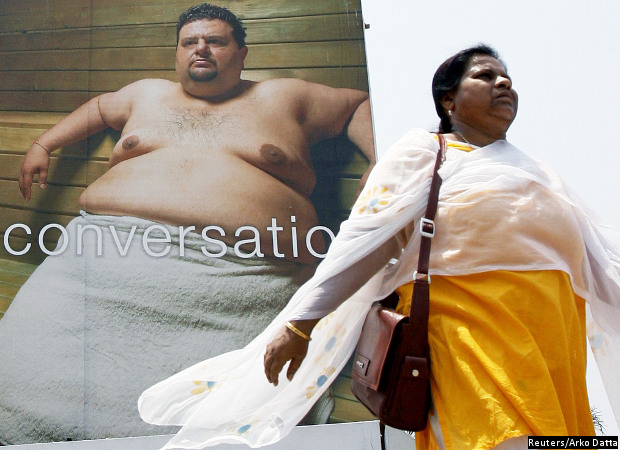 Broadening girths are expanding India’s battle against malnutrition, a new Indian study has revealed, setting off a host of so-called lifestyle ailments.

This is happening as India fights a losing battle with the bulge, hosting as it does the third-most number of obese people in the world, 61 million and growing.

Malnutrition is commonly associated with emaciated, undernourished people, not with being obese or overweight—or over-nourished, as it is called in dietary parlance.

Actually, the ‘over’ in over-nourished relates only to calories, or energy intake. Getting those excessive calories from fat- and sugar-rich, nutrient-poor foods can lead to significant micronutrient deficiencies in obese people, said Carlyne Remedios, senior nutritionist, Centre for Obesity and Digestive Surgery, Mumbai and co-author of the study published in August 2015 in the journal Obesity Surgery.

A new US study has arrived at a similar conclusion as Remedios. One in five obese patients of that study had insufficient levels of three or more of these micronutrients: vitamin A, vitamin B12, vitamin D, vitamin E, iron, folate (vitamin B9) and thiamine (vitamin B1).

Clearly, abundance of food and nutrition are not synonymous.

Overweight Indians: Growing almost as fast as malnourishment is contained

India’s new face of malnourishment is likely to belong to the urban and affluent, those who can afford to choose their diet.

Three times more obese and overweight people live in urban areas than in rural areas, as per the National Family Health Survey III. Their numbers are growing almost as fast as the number of undernourished Indians is being contained. 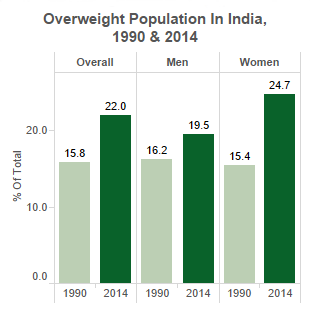 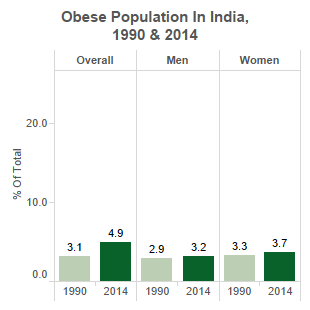 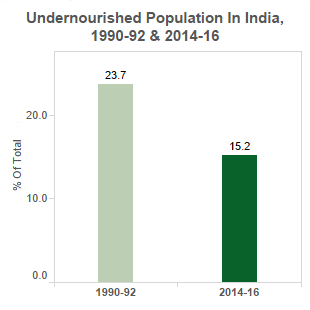 A 28 year-old man, 5 feet 4 inches tall, weighed 100 kg. His diet was overloaded with bad carbohydrates and bad fats, and low in protein. Severely obese, he complained of persistent body ache and pain in the thighs and around the knees. His vitamin B12 levels were low.

A 13 year-old girl, 5 feet 4 inches tall, weighed 114 kg. She consulted a dietician for a weight-loss programme.

Blood tests showed the young teen to be borderline diabetic, despite her young age.

Research and the experience of dieticians across the country trace a clear correlation between faulty diets and excess weight.

In a 2013 survey focussed on women conducted in Delhi, obese women identified fried food as the leading cause for their condition, while overweight women attributed excess weight to overeating.

“Most overweight and obese people consume a surfeit of energy-dense foods rich in saturated fats and simple sugars,” said Karishma Chawla, Mumbai-based nutritionist and founder, Eat Rite 24x7, a nutrition consultancy, “We call them empty calories for being nutrient poor.”

To add to this, metabolic changes associated with obesity can compromise the absorption of micronutrients from food.

Technically, obesity is a kind of inflammation, which research has shown impairs iron absorption or iron utilisation.

“Research is yet to fully confirm but we believe that adipose (fat) impedes the utilisation of micronutrients—iron and potentially other micronutrients—by the tissues,” said Remedios.

From fatness to disease—via micronutrient deficiencies

Raised BMI is a major risk factor for non-communicable diseases such as heart disease and stroke, the leading cause of death in 2012, diabetes, musculoskeletal disorders and some cancers—endometrial, breast, and colon, according to the World Health Organisation.

Less commonly reported is the association between obesity, nutritional deficiencies and disease.

A US study has traced a link between obesity, diabetes and deficiencies of vitamin D, chromium, vitamin B7 (biotin), vitamin B1 (thiamine) and vitamin C.

This is highly plausible.

“Overweight people are at higher risk of developing vitamin D deficiency because the vitamin is fat-soluble, which means it gets stored or ‘locked up’, so to speak, in fat cells, with less available to the body for use,” said Seema Gulati, head of the Nutrition Research Group, Center for Nutrition & Metabolic Research (C-NET).

While that is reason enough to lose weight, shedding kilograms isn’t so easy.

In the last 33 years, no country has significantly reduced obesity, according to the Global Burden of Disease Study 2013.

With the prevalence of overweight people in India estimated to increase to 27.8% by 2030, and with the most population growth expected to occur in urban India where obesity is expanding the fastest, experts said public policy should focus on malnutrition at the other end of the spectrum—that presents its own challenges because in India, over- and under-nutrition are not simply a problem of the rich or the poor.

“Often, over- and under-nutrition overlap and coexist in the same household even in rural and periurban areas as a result of ‘urbanicity’,” said Sutapa Agrawal, epidemiologist, Public Health Foundation of India.

So what is the best way forward?

Catch them young before the fat creeps on: create awareness in children through school education programmes that simultaneously address both types of malnutrition, she said.