Patna: Heavy, portable lights shaped like chandeliers and wired to a mobile generator are a common sight at baraats, traditional Indian wedding processions led by the groom. Walking long distances with this light hoisted over his head or shoulders, holding a live wire, is a task Vilas Kumar*, 15, often took on after school hours.

Unable to juggle school and work, he dropped out.

Like Kumar, who hails from Bhagalpur city in southeastern Bihar, several other children, mostly aged between 12 and 17, provide cheap labour to the wedding industry in and around the cities of Bihar.

In Parsa village of Phulwari block in central Bihar, almost every day during the wedding season--determined by auspicious dates on the Hindu calendar--a group of around nine boys set out on an 8-km cycle ride to state capital Patna after school hours. There, they work as helpers at wedding events, often logging 11-hour work shifts.

“Our shifts at weddings are fixed--4 pm to 3 am,” said Rakesh Kumar*, a 13-year-old, Class 8 student. The boys are assigned tasks at the banquet. Pinning disposable covers on dining tables, washing and drying dinner plates and arranging them, serving food, and filling and refilling dishes--these are some of the jobs handed to the children. 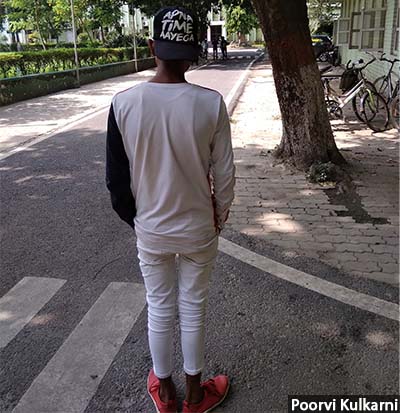 Rakesh Kumar*, 13, is among the many children from poorer homes in Parsa village in central Bihar who cycle to capital city Patna to work at weddings after school.

The children we spoke to were attending a workshop held in Patna in July 2019 to devise localised solutions to child labour. They mostly come from families that survive on daily wage work. The extra money that this seasonal work brings is critical for the families.

In a country where 10.1 million children aged 5-14 are working--albeit 2.5 million fewer than in 2001--illegal child labour in weddings in Bihar represent India’s inability to end the crime. India ratified two International Labour Organization conventions to eradicate child labour in 2017 but our investigations found that children are not just working but also handling arduous and risky late-night tasks at wedding events in Bihar.

Bihar is the fifth poorest state and ranks lowest on school attendance. With 2.07 million workers aged between 5 and 17, the state accounts for 10.7% of India’s underage workforce and has the second highest number of child and adolescent workers. Uttar Pradesh has the highest at 4.5 million. Among all states and union territories, Bihar also has the lowest proportion--67%--of children aged between 5 and 17 attending school. The Indian average is 75%.

The government does not monitor the wedding contractors who hire these children. “We do not keep records of any contractors,” state labour commissioner Gopal Meena told IndiaSpend. “Our action is centred on rescue and rehabilitation.”

With loophole in law, implementation falls through

Further, adolescents aged between 14 and 17 cannot be employed for more than six hours a day and these hours cannot fall between 7 pm and 8 am, as per the The Child and Adolescent Labour (Prohibition and Regulation) Act, 1986. A weekly off is also mandated.

But wedding contractors who employ children at venues across Bihar, particularly Patna and Bhagalpur, violate every law on child labour, we found in our conversations with children and child rights activists.

“If the labour department inspects or raids weddings in Bhagalpur, up to 200 child workers can be found employed in different jobs (in the wedding industry),” said Abhishek Kumar from Samvet, a Bhagalpur-based non-profit working on child rights. “In baraats specifically, contractors employ children because they can be paid less.” Adult daily wage workers are paid around Rs 350 per day in Bhagalpur but an underage boy employed at wedding venues gets just Rs 200, he added.

The reason children are employed at wedding events can be traced to a legal loophole. The August 30, 2017 notification brought out by the Ministry of Labour and Employment, following the 2016 amendment to The Child Labour Act, bans employment of children in 107 different industries and work processes. But this list does not specifically include wedding and party events.

The accounts we heard from child and adolescent workers in Patna suggested that they were frequently employed in India’s Rs 1.1 lakh crore ($16 billion) wedding services industry that is estimated to be growing at 25% a year.

“There are about eight wedding halls in Bhagalpur and about 20 light and baraat contractors who could be penalised for employing children,” said Abhishek. “But, no such action is taken.”

Establishments employing adolescent workers are required to send their occupation and management details to the labour inspector, as per section 9 of The Child and Adolescent Labour Act, 1986. Employers are also called to maintain registers that record nature and hours of work and intervals of rest of adolescents by section 11 of the Act.

But, employers found a way to dodge this scrutiny, we found. They would employ children who looked older than their age.

Official raids against child employment are concentrated on dhabas (small wayside eateries) and factories, said labour commissioner Meena. “If anybody has any information about children working, they should send it to us,” he said.

From 2014 to 2016, 18,601 inspections were carried out and 1,669 prosecutions were initiated in child labour cases in Bihar, according to labour ministry’s reply to the Lok Sabha on March 23, 2017. Yet, Bihar is ranked among the bottom five states in identifying, rescuing and rehabilitating child workers, according to Ministry of Labour and Employment’s Platform for Effective Enforcement for No Child Labour.

The children have to work to ensure that they have a brighter future. “Hamari padhai ke liye toh humein kamaanaa hi padega (we have to work to ensure that we can study),” said Shyam Kumar*, 14, also from Parsa. He failed Class 7 twice but continues to juggle school and wedding work. “Hum par koi dabaav nahin hai kaam ka--koi aur achha kaam miley to kar lenge (We are not being forced to work and if we find something better than this we might switch).”

Once the wedding ceremonies wind up, usually around 3 am, the children have dinner and head home. Rakesh and Shyam get barely two hours of sleep before they wake up and get ready for school. When the wedding season lasts over several weeks, as it often does over November and December, they keep up with this punishing schedule for two consecutive months. 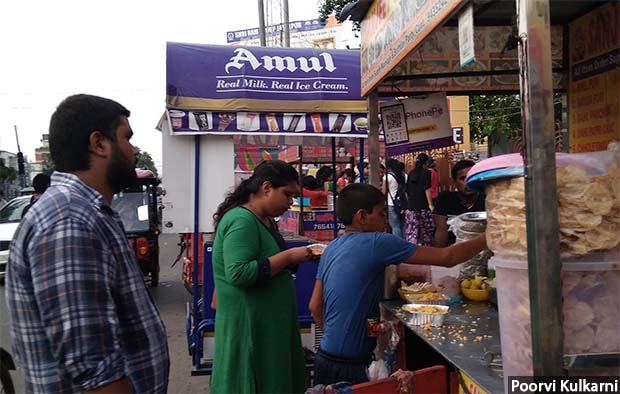 A child worker at a food stall near the plush Boring Road locality in Patna, Bihar’s capital. At 67%, Bihar has the lowest proportion of children (aged 5 to 17 years) attending school.

Praveen Kumar*, 16, who works at wedding events, carries on his right thumb a permanent burn scar. He survived an electric shock just a few months ago while installing lights at a wedding venue.

“Those must have been live wires,” he recalled. “When I clasped them, I couldn’t move away for a few seconds and felt electric currents passing from my hands to my upper torso. Then, I don’t know how, but I managed to release my fists.”

Several adolescents aged below 18 were regularly hired by light contractors at wedding venues in Bhagalpur city. Their work often requires them to stay at the venue for three days to install elaborate light arrangements. Praveen hails from the city’s Lalu Chak mohalla (area), home to around a dozen boys who regularly work at wedding venues.

Vilas, who is also from Lalu Chak mohalla, often walks for three hours holding the heavy lights for a baraat. “Kabhi kabhi sir pe bhi rakh kar chalte hain (Sometimes, the lights are placed on our heads too),” he said.

Even after the baraat reaches the wedding venue, the boys continue to stand with the lights and cables as the prolonged ritual of families greeting each other gets underway. That takes another couple of hours.

It is often close to midnight when he and other child and adolescent workers return home from work. “Raat mein jagne ka kaam hone ki wajah se school mein bahut neend aati hai (Because our work involves staying awake till late in the night, we feel sleepy in school),” said Vilas. He dropped out after Class 8. Now when he is not working at wedding events, he works as a van driver though he is too young to possess even a learner’s licence.

A chunk of the work involved in wedding catering--the more menial tasks--are handed to the children. “If the kitchen and dining area are on different floors, we have to make several rounds, climbing up and down carrying heavy food containers,” said Shyam from Parsa. “We also carry large piles of plates and tumblers and if anything breaks we are beaten and the cost recovered from our wages.” 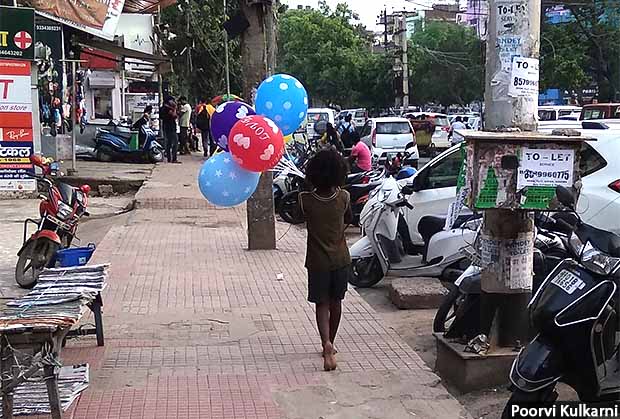 A child worker sells balloons in Patna. This kind of hawking is among the most common jobs that child workers engage in, as per a 2018 survey conducted by the Praxis Institute for Participatory Practices, a Patna-based non-profit.

“With changing economy, the nature of child labour is also changing,” said Dheeraj (he goes only by first name), programme manager, Praxis Institute for Participatory Practices, a Patna-based non-profit. “Children are attending school (but that) does not mean that they are not being pulled into work.”

Only about three students out of every ten in Parsa clear Class 10, the children estimated. In Bihar, 44% of youth aged between 15 and 19 do not attend any educational institution. In Patna district, this figure stood at 36%.

“One of my classmates stopped coming to school recently after his father died,” said Rakesh. “He is the eldest son in the family and does multiple jobs to ensure that his younger siblings can study. He does wedding work during the season and then takes on work at a biscuit factory. He works there from 9 am to 10 pm.”

Yet, more strenuous than the work, the children said, was the late-night commute home through deserted roads. There was constant fear of being stopped and questioned by the police, they said.

(*The names of the children who feature in the story have been changed to protect their identity.)

(Kulkarni is a Mumbai-based freelance journalist.)