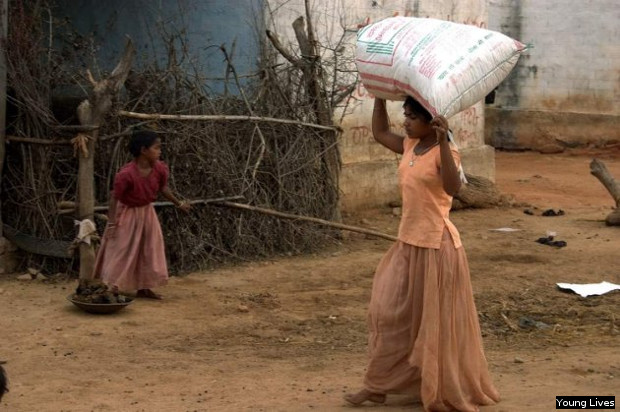 “India is the only country trying to become a global economic power with an uneducated and unhealthy labour force.”—Nobel laureate Amartya Sen, during a speech recently at the London School of Economics.

Children aged 12 who spent three or more hours per day doing domestic chores were 70 % less likely to complete secondary education, according to a study by Young Lives Association, a research project coordinated by a team based at Oxford University.

Secondary education in India comprises grades 9 and 10, and succeeds the elementary level (grades 1 to 8) of schooling. Right to free and compulsory elementary education up to the age of 14 is a fundamental right of every child in India as per Right to Education Act, 2005.

While the enrolment is 100% at the primary level, around 10% of children drop out of school education before completing elementary school.

The all-India gross enrolment ratio at the secondary level is 78%, which means almost 22% of children in this age-group (15-16 years) are not going to school at the secondary level, according to data from District Information System for Education (DISE). Data from DISE also show that for every 10 upper primary (grades 6-8) schools, there are only four secondary (grades 9-10) schools in India.

Source: District Information System for Education; *If there is late or early enrolment, or repetition of a grade, total enrolment can exceed the population of the age group that officially corresponds to the level of education, leading to ratios greater than 100%.

Source: District Information System for Education; Figures are for 2014-15. *If there is late or early enrolment, or repetition of a grade, total enrolment can exceed the population of the age group that officially corresponds to the level of education, leading to ratios greater than 100%. Relatively large states in India have been compared, and union territories and states with low population from the North-East have been excluded.

Both groups of best and worst enrolment ratios at primary levels show similar variations in dropout rates at the secondary level.

States like Chhattisgarh have high enrolment in secondary school, but dropout rates are also high (23%), while Uttar Pradesh has low dropout rates, although gross enrolment is low.

Girls are 45% less likely to complete secondary education than boys, according to the findings of the Young Lives study.

Social stigmas play a major role in limiting this educational access to the girls. “When dealing with girls’ travel to school, particularly from marginalised and excluded communities, it is critical to consider the strong cultural and traditional constraints on girls’ mobility and the perceived threat to their safety and security,” said The Young Lives report citing other studies.

Only 66% of girls were found to have successfully completed secondary education as against 77% of boys.

Children are being forced into unskilled labour

“As India comes close to realising universal enrolment at primary and upper primary levels, the universalisation of secondary education has become critical if the country is to achieve equitable social development and build a skilled workforce,” the study said.

IndiaSpend had reported how child workers lose interest in education if they get pulled into the labour force.

India has approximately 4.4 million working children in the age group of 5-14 years, according to Census 2011 figures. These children grow up to be a part of the unskilled labour force because they are not able to acquire skills and education at a younger age.

This group of children dropping out of school stays out of the skilled labour force: One, the compulsion to work at a young age because of poverty, and two, the fact that once reading and writing skills are not developed at a young age, it is difficult for these children to get further training.

While measures to empower the unskilled labour force of India are being implemented, children who drop out of school may end up being excluded from this scheme as well.

1) Gross Enrolment Ratio: Total enrolment in secondary education (Grades 9-12), regardless of age, expressed as a percentage of the eligible official secondary school-age population (14 to 17+ years) in a given school-year.

2) Average Annual Drop-out rate: Presents average of grade-specific drop-out rates in secondary grades and is calculated by considering grade-wise enrolment in 2013-14 and 2014-15 and grade-specific number of repeaters in 2014-15.

(Tewari is a policy analyst with IndiaSpend. Sharma is an intern at IndiaSpend.)