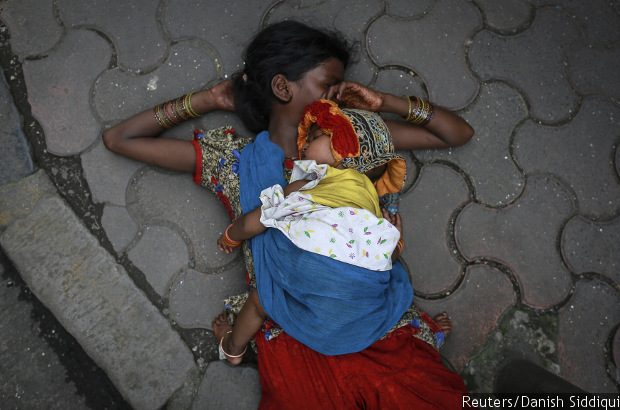 Catastrophic maternal healthcare expenses push 46.6% mothers in India into poverty--with the illiterate being especially susceptible--according to this December 2016 study by researchers from Jawaharlal Nehru University and Indian Institute of Technology, Roorkee. The expenses include childbirth, antenatal care and postnatal care expenses.

Catastrophic expenditure is greater than or equal to 40% of a household's non-subsistence income, i.e. income available after basic needs have been met, according to the World Health Organization (WHO). The threshold of 40% can differ according to countries, said the WHO; the 2016 study has analysed the data at two thresholds: 10% and 40%.

As many as 63% households nationwide had a catastrophic maternal health expenditure of 40%, the study--which analysed data from the National Sample Survey Office--found. Among states and union territories (UTs), 65.7% households (among those where a woman had delivered) in Telangana were pushed into poverty--more than any other state/UT--due to childbearing expenses, followed by Chhattisgarh (53.7%) and Puducherry (53.4%).

Source: How Affordable is Childbearing in India? An Evaluation of Maternal Healthcare Expenditures

More illiterate women prefer public hospitals for delivery in both rural (79.2%) and urban areas (67.7%), which possibly explains their low OOP.

Better education among pregnant women is correlated with lower prevalence of anaemia, IndiaSpend reported on September 17, 2016.

Among women of different social groups, women belonging to scheduled tribes (STs) had the least maternal OOP expenditure at Rs 2,962, but 71.5% of them were pushed into poverty. As many as 85% ST women in rural areas delivered in public hospitals--more than any other social group.

Source: How Affordable is Childbearing in India? An Evaluation of Maternal Healthcare Expenditures

The 2016 study holds relevance in the context of the central government announcement on May 18, 2017, that it is revising the Indira Gandhi Matritva Sahyog Yojana (Maternity Benefit Programme), announced by Prime Minister Narendra Modi on December 31, 2016, by restricting the scheme to firstborns instead of 'first two live births' as applicable earlier.

The programme aims to give Rs 6,000 to pregnant women for childbearing expenses. The scheme saw an increase of 226% in allocation in the 2017-18 budget from Rs 634 crore to Rs 2,700 crore. However, the government had estimated that the annual requirement for the maternity benefit scheme would be Rs 14,512 crore, according to this report in The Indian Express on February 18, 2017.

The 2016 study revealed that, on average, a woman incurred an OOP expenditure of Rs 8,543 on childbearing. There were huge variations among states--from Rs 2,801 in Uttarakhand to Rs 15,433 in Telangana.

“The most vulnerable women who are trying to reach out for the government aid won't be able to get it,” Tania Sheshadri, an independent community health researcher who works with rural women in Karnataka, told The Press Trust of India on May 18, 2017.

“In most parts of the country, there is a two-child norm and a scheme like this will not benefit most women. The government should concentrate on quality care for pregnant women and make available the benefits to every woman who reaches a government health care centre."

A limitation of the 2016 study is that it does not consider the benefits of Janani Suraksha Yojana (JSY, motherhood protection scheme), a 12-year-old government programme focused specially on 10 states with low rates of institutional delivery--Uttar Pradesh, Uttarakhand, Bihar, Jharkhand, Madhya Pradesh, Chhattisgarh, Assam, Rajasthan, Odisha, and Jammu and Kashmir--termed as low-performing states (LPS).

Under the programme, pregnant women in rural areas who live below the poverty line are to be given cash assistance–Rs 700 in high performing states and Rs 1,400 in LPS–irrespective of the mother’s age and number of children so that they opt for birth in a government or accredited private health facility.

JSY has failed to cover the poorest women, according to this 2014 analysis of JSY data by researchers from Georgetown University. As many as 60% women in Uttar Pradesh said they had to pay for certain public maternal health services, according to an assessment of JSY conducted by United Nations Population Fund in Bihar, Madhya Pradesh, Odisha, Rajasthan and Uttar Pradesh in 2012, IndiaSpend reported in September 2015.