Child Marriage To Groundwater Contamination: Our Top Stories From 2016 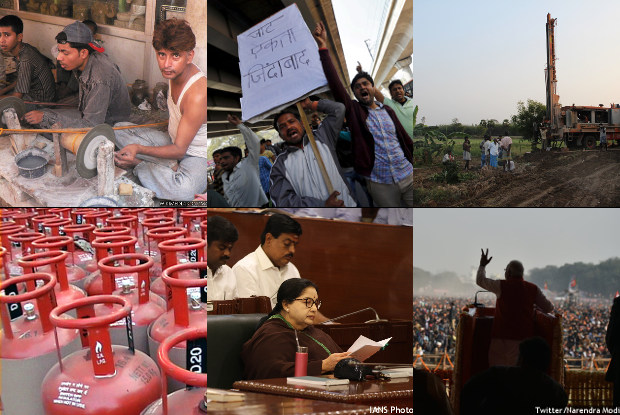 As 2016 comes to a close, we at IndiaSpend and Factckecker.in looked at the stories that captured your attention this year. Despite notebandi--perhaps the biggest news of the year--the most read story of 2016 was about child marriage and its prevalence in Hindus. Other popular stories included the looming demographic disaster in India and reservations for Jats.

On Factchecker.in, our factcheck of the telecom minister’s claims of Bharat Sanchar Nigam Limited's (BSNL’s) success, the government’s savings on cooking gas subsidy, and the Prime Minister’s 2016 Independence Day speech, were the most popular.

Here are the top five stories on the IndiaSpend website:

Nearly 12 million Indian children are married before the age of 10 years--84% of them Hindu and 11% Muslim--revealed an IndiaSpend analysis of census data. To put it in context, this number is equivalent to Jammu & Kashmir’s population. As many as 7.84 million (65%) married children were female, as were eight in 10 illiterate married children--reinforcing the fact that girls are significantly more disadvantaged. The data further reveal that 72% of all Hindu girls married before 10 were in rural areas, as compared to 58.5% Muslim girls.

India will need to generate 280 million jobs between 2016 and 2050, the year when the working-age population (15 to 64 years) will peak, according to a new report, amid indicators that the country’s demographic dividend could be at the cusp of disaster. Over 22 years of unprecedented economic growth (1991 to 2013), less than half the Indians who sought jobs got them--140 million of 300 million--according to a United Nations Development Programme (UNDP) report. We identified six warning signs of India’s jobless growth, and the inability of the country to cash in on its “demographic bonus”, the world’s largest working-age population—869 million by 2020—because of limited progress on health, education and job skills.

Square-jawed, cleft chin and hair untidily spiked, Vikas Thakaran glowered as he explained why he was in this scrum of young men blocking Bakhtawar Chowk, 30 km southwest of India’s capital, part of a violent week-long agitation that had left 12 dead, vehicles and railway stations burnt, and the army deployed. Thakaran, 24, is a computer-science engineer, but he is unemployed. “I applied for government jobs four-five times, many times elsewhere, but I didn’t get through,” he told IndiaSpend.

Traditional landowners, the Jats are a powerful Hindu caste that demanded classification as a “backward” caste--a contention rejected last year by the Supreme Court--so that government jobs can be reserved for them. However, an IndiaSpend analysis of employment data and evaluation of aspirations of young Jats revealed that the protests are manifestations of India’s slow, inadequate job-creation and a failing education system creating thousands of “unemployable” graduates.

In a country where 74% of farmland is not irrigated and water shortages are growing, India is on course to become “water scarce” within nine years, with depleting groundwater adding to an ongoing farm crisis. In recognition of groundwater declines, Finance Minister Arun Jaitley said his government would spend Rs 6,000 crore on “groundwater management”, but the details are unclear. India draws more freshwater annually compared to any other country. The scarcity has worsened because more than half of that water is now contaminated, mainly by industry and sewage, sparking diarrhoea, typhoid and viral hepatitis. A common argument is that India’s growing water use in inevitable. But China, with 1.4 billion people, uses 554.1 billion cubic meters of freshwater every year--28% less than India.

Tamil Nadu’s 19th chief minister (she was also the 11th, 14th, 16th and 18th) J Jayalalithaa, who died on December 5, 2016, was known for gifting her 72 million people a record set of freebies, but she also leaves behind a state that ranks among India’s best in many social, crime and industrial indicators. Tamil Nadu now has India’s lowest fertility rate--lower than Australia, Finland and Belgium--second best infant mortality and maternal mortality rate; records among the lowest crime rates against women and children; and has more factories and provides more industrial employment than any other Indian state, according to an IndiaSpend analysis of various data sets. But the freebie culture that she expanded and personalised has come at a financial cost.

Here are the top five stories from Factchecker.in:

“In one year and eight months, we have brought Bharat Sanchar Nigam (BSNL) on par with private players. Under National Democratic Alliance (NDA), BSNL, for the first time, had an operative profit of Rs 672 crore,” former Minister for Communication and Information Technology Ravi Shankar Prasad said in May 2016, when the NDA government was about to complete two years in power. “BSNL has reversed the trend of operating loss,” Prasad said in February 2016, answering a question in the Rajya Sabha, the upper house of Parliament. A fact-check of the minister’s claims revealed they were either wrong or exaggerated.

“Why is it that subsidies going to the well-off are portrayed in a positive manner? Let me give you an example. The total revenue loss from incentives to corporate taxpayers was over Rs 62,000 crore… I must confess I am surprised by the way words are used by experts on this matter. When a benefit is given to farmers or to the poor, experts and government officers normally call it a subsidy. However, I find that if a benefit is given to industry or commerce, it is usually an ‘incentive’ or a ‘subvention’,” Prime Minister Narendra Modi said in Delhi, in February 2016. So effective have some incentives been that companies making larger profits are now paying a lower rate of effective tax, revealed our analysis of national tax data over five years, with thousands of companies effectively paying no tax.

‘Accountability, responsibility and efficiency’ were the keywords in Prime Minister Narendra Modi’s speech from the ramparts of the Red Fort on the 70th Independence Day; and the focus, ‘good governance’. The PM quoted data to back his government’s claims and got many right, although some exaggerations were evident and a couple missed vital context. We presented you the main facts, checked.

Prime Minister Narendra Modi faced criticism for his comments on Kerala, ahead of state elections on May 16, 2016. We fact-checked Modi’s claims on Kerala’s power dependence, low agricultural production, high infant mortality in scheduled tribes, and high unemployment, and found that only one claim was correct, some claims were exaggerated, and others unfounded.

Modi Is Wrong: His Govt Changed Law On Foreign-Funding Of Political Parties (December 21, 2016)

Prime Minister Narendra Modi claimed on December 19, 2016, while addressing a Bharatiya Janata Party rally in Kanpur, Uttar Pradesh, that his government has not changed “even a comma or a full stop” on laws that regulate funding of political parties. That claim is wrong, since the government--disregarding opposition from All India Majlis-e-Ittehadul Muslimeen member of Parliament Asaduddin Owaisi--changed the Foreign Contribution Regulation Act, 2010, while passing the Finance Bill, 2016, in May 2016. Modi’s minister of state for home, Kiren Rijju, admitted to this change eight months ago.