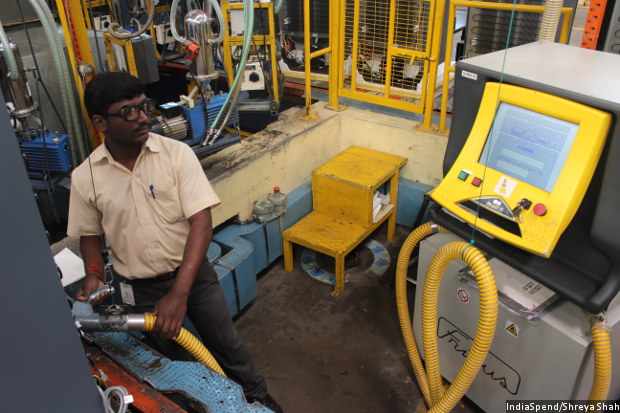 A technician fills Isobutane gas, an alternative refrigerant to hydrofluorocarbons (HFCs)--major greenhouse gases, with a warming potential ranging from less than 1 to over 12,000 times that of CO2--in a Godrej and Boyce manufacturing plant in Shirwal, Maharashtra. One of the biggest challenges in switching to non-HFC alternatives was convincing the staff that these appliances were safe, a Godrej official told IndiaSpend.

Shirwal (Maharashtra): In a 54-acre manufacturing facility in Shirwal, about 190 km south of India’s financial capital, Mumbai, a man wearing protective eyewear used a gun-like device to pump Isobutane, a refrigerant, into the back panel of a refrigerator. The factory, owned by Godrej and Boyce Mfg. Co. Ltd., churns out an average of 10,000 air conditioners (ACs) and 60,000 refrigerators in a month. All appliances manufactured here are some of the most environmentally safe of their kind globally--and use no hydrofluorocarbons (HFCs), gases that can have global warming potential over 12,000 times more than carbon dioxide (CO2).

The switch to non-HFC alternatives costed Godrej about Rs 36 crore for refrigerators and Rs 10 crore for ACs. Today, Godrej is one of the few firms in India that does not use HFCs in their refrigerators, and the only firm that doesn’t use HFCs in ACs. But Godrej refrigerators and ACs make up a small part—14% and 6%, respectively--of India's total fridge and AC sales. About 40% of all ACs Godrej sells are HFC-free. Still, Godrej's success in moving to non-HFC alternatives shows a pathway for other Indian companies to reduce their HFC consumption.

This week, as 187 countries consider a North American proposal for developing countries to reduce the world's consumption of HFCs, an IndiaSpend analysis reveals India's counter-plan for developing countries would cost the Indian economy less but would have a much smaller impact on cutting global warming, and have lower savings through energy efficiency. Countries are also discussing other plans presented by the European Union--which is similar to the north American proposal--and a proposal by island states, which asks for a greater reduction in HFCs by 2050 than the other plans.

India’s proposal for an HFC phase-down would cost the Indian economy 65% less than the North American proposal, but India would add over nine times more CO2 equivalent to the atmosphere in 2050, based on various think tank and United National Environment Program (UNEP) reports. The Indian proposal, if adopted by all developing countries, would cost the Montreal Protocol’s multilateral fund about $1 billion (Rs 7,000 crore) more in assistance for technology transfer.

In 1987, through the Montreal Protocol, a global treaty, countries agreed to end the consumption of chlorofluorocarbons (CFCs), gases that depleted the earth's protective ozone layer and had a very high global warming potential. CFCs were replaced by hydro chlorofluorocarbons (HCFCs), which are not as damaging to the ozone layer but have a high global warming potential.

Today, HFCs that have no impact on the ozone layer, are replacing HCFCs. But HFCs are major greenhouse gases, with a warming potential ranging from less than 1 to over 12,000 times that of CO2, according to the Intergovernmental Panel on Climate Change.

In Novemeber 2015, at the 21st Conference of Parties of the United Nations Framework Convention on Climate Change in Paris, member countries agreed to take steps to limit the rise of the earth’s temperature to under 1.5 to 2 degrees Celsius by the year 2100. HFC emissions in the world are expected to grow by 10-15% by 2050, and could contribute to 200 billion tonnes of CO2 equivalent emissions. Preventing the rise of these emissions could reduce the warming of the earth by 0.5 degrees Celsius, according to this 2015 brief by Institute for Governance and Sustainable Development (IGSD), a Washington DC-based advocacy and research organization.

Godrej started the move to hydrocarbons (HCs)--which have no effect on the ozone layer and very little global warming potential--in 1999, according to Burzin J. Wadia, the executive vice president of innovation at Godrej and Boyce. First, they switched to R-600, known more commonly as Isobutane, for all their refrigerators. It costed them Rs 36-40 crores, a sixth of which was funded by Swiss and German governments. In 2010-11, they moved their air conditioners to R-290 (Propane), which costed them Rs 10 crore, completely funded by GIZ, the German international development agency, Wadia said.

HFCs would make up 5.4% of India’s global warming impact in 2050, as demand for air conditioners and refrigerators rises, according to a 2015 report by the Council on Energy, Environment and Water (CEEW), a Delhi-based research institute. The highest HFC emissions in 2050 are predicted to come from residential air-conditioning (35%) and commercial refrigeration (28%). 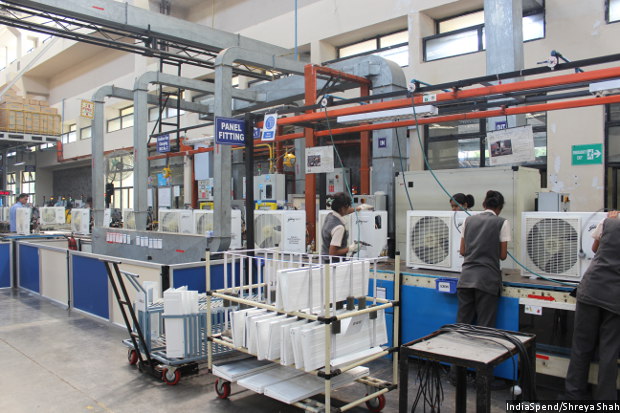 Godrej's Eon air-conditioners use Propane, a gas with much lower global warming potential than commonly-used hydrofluorocarbons (HFCs). As demand within India rises, residential air-conditioning will be a major source of HFC emissions, contributing to 35% of all HFC emissions in India in 2050.

Why India prefers a later date for reducing HFC consumption

If developed countries should freeze HFC consumption now, in 2016, and reduce it by 70% by 2026 or 2027, India will agree to an earlier baseline--around 2026--for developing countries, the Indian government proposed at a meeting in Kigali, Rwanda, according to an October 2016 report in Business Standard. An earlier baseline would mean that the total reduction in consumption of HFCs would be higher.

Early phase-down of HFCs challenging but necessary for the environment

India has phased out the production and consumption of CFCs, reduced HCFCs by 10% by 2015, and is on track to reduce HCFC consumption and production by 35% by 2020, according to information from the Ozone Cell of the ministry of environment, forest and climate change.

The North American proposal for HFC phase-down would potentially lead to India eliminating 6.14 giga tonnes of CO2 equivalent, and cost India approximately $36.3 billion (Rs 2.5 lakh crore), or about 0.02% of India’s expected cumulative GDP, according to a 2016 CEEW report.

This includes the cost of switching to low global warming potential alternatives, but does not include costs for training technicians and new safety routines. Still, the Indian economy would save about $58.4 billion (Rs 3.9 lakh crore), mostly because of energy efficiency of the newer refrigerants and the lower relative cost of the alternate refrigerant to HFCs in air-conditioners. Annual emissions in 2050 would be about two mega tonnes of CO2 equivalent.

India will add an equivalent of 500 mega tonnes of CO2 in 2050 to the atmosphere if no changes are made to industry standards; India continues to replace CFCs and HCFSs with HFC producing alternatives, according to this 2015 CEEW report. This is an increase of more than 25 times compared to 2015.

The cost of moving to non-HFC alternatives would be small per product manufactured. For instance, changing the air-conditioner of every car to a non-HFC producing alternative would cost around Rs 5,000 to Rs 6,000 per car, said Vaibhav Chaturvedi, a CEEW research fellow. But it is the total costs that add up to billions of rupees, he explained. An earlier freeze date would mean that domestic industries would have to adapt much faster.

But these numbers are estimations and might change in the future, because it is difficult to estimate the cost of change in technology and exact future emissions, the report cautioned. 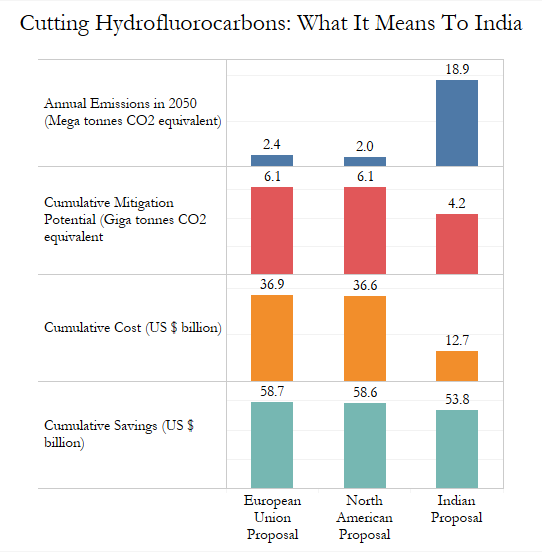 Later phase-down of HFCs will cost an additional $1 billion

India will get assistance from a multilateral fund, set up under the Montreal Protocol to aid developing countries change technology to phase down ozone-depleting chemicals, and now greenhouse gases. Sixteen donor countries contributed $27 million (Rs 180.2 crore) to the multilateral fund in September 2016. In addition, 19 philanthropies said they intended to provide an additional $53 million (Rs 353.8 crore), likely to help developing countries phase down HFCs early.

But the later the freeze date, the higher would be the cost of moving to green technologies, and its cost to the multilateral fund, according to this 2016 report by the Technology and Economic Assessment Panel of the UNEP.

Overall, assistance to developing countries in the North American proposal ($4.3 billion to $6.5 billion) would cost the multilateral fund half of what the Indian proposal ($9.2 billion - $14.2 billion) would. The calculation assumes that there would be no reduction in HFCs until 2031, the peak year, which raises the costs of transfer of technology and adaptation.

“The longer you wait, the more factories you’ll have to change,” as India is growing, explained Bhaskar Deol, of the National Resource Defenses Council (NRDC), a New-York based nonprofit. Given the environmental costs, it would be prudent for India to phase down earlier, he said.

If the Indian proposal of a 2031 freeze for developing countries is accepted, the world would release an extra 24 billion tons of CO2-equivalent, about the same amount of CO2 as about 700 coal-fired power plants do in 10 years, according to a 2016 blog by NRDC’s David Doniger. 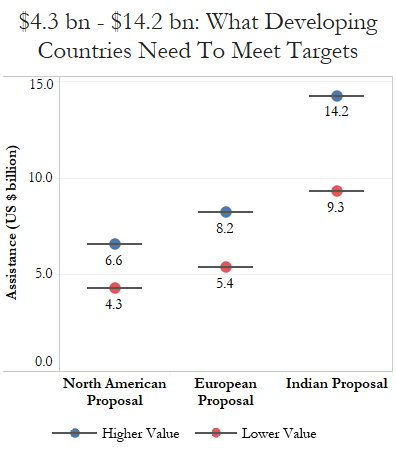 Even with a late freeze date, companies would have to comply with emission specifications of countries they export goods to. And once they have the technology to use non-HFC alternatives, it could be possible to switch products meant for the Indian market to new technology. “Even though the technology is available, it is never easy for companies to change systems,” explained Chaturvedi.

Several companies that either produce HFCs or consume products using HFCs--including Berkshire Hathaway Energy, Daikin U.S. Corporation, Dell Inc. Godrej Group, and several others--declared their intent to reduce dependence on HFCs, in this this joint statement released by the White House in September 2016.

Godrej said it did the right thing, both economically and environmentally, by changing its systems. “We are sure we made the right choice when it comes to refrigerators,” by switching to hydrocarbons, said Hussain Shariyarr, the head of manufacturing at Godrej and Boyce. “For ACs, only time will tell,” added Wadia.

“One of the biggest challenges was convincing our plant staff and repair staff that these appliances were safe, and that there was no fear of explosion if the safety procedures were followed,” explained Shariyarr.

India needs specific policies to promote alternatives with low global warming potential by developing and implementing appropriate regulations to control leaks, improve components, collecting used products and paying for sectoral bans on high warming potential refrigerants, said the CEEW report. There should be more research and development into alternatives to HFCs for room air conditioners and refrigerators, the report said.