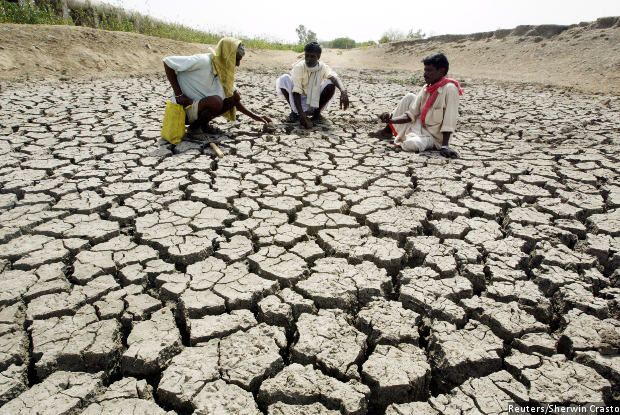 The production of cereals is projected to fall 41%, and pulses 11%, as agricultural growth in Maharashtra is set to decline 2.7% for the year 2015-16, after deficient rainfall in 278 of 355 talukas (sub-units of districts), according to the Economic Survey of Maharashtra 2015-16.

In 2015, the rainfall in Maharashtra was 60% of normal, and so the state's farmed area for the winter crop (rabi) declined 16% between October 2015 and March 2016, according to the Survey. This is the second successive year of below-normal rainfall.

The lack of rain has created crises in other states as well: 246 of India's 688 districts across 10 states--or 35% of India's area--are now officially drought-hit, according to this answer provided on March 10 to the Lok Sabha (the lower house of Parliament).

Maharashtra is India's second-most important agricultural state (after Uttar Pradesh), with 52.7% (61 million) of its 112 million people dependent on the rural economy. Overall, its gross domestic product (GSDP) is India's largest at Rs 15.7 lakh crore ($236 billion), of which 10% comes from agriculture.

The only bright spot in the state's stressed economy is the services sector, employing 44 million people and likely to grow 10.8%, followed by industry at 5.9%, the Survey said.

Rainfall about 60% of normal, stresses agriculture

Of 355 talukas (except Mumbai and its suburban district), rainfall was "deficient"--which means that the districts received rainfall less than 50% to 70% of the average--in 278 talukas, as we said earlier, normal in 75 and excess in two (Akole and Mahabaleshwar).

The sparse rainfall has deterred sowing. During the 2015 kharif (April to October) season, 141.46 lakh hectare was sowed, 6% less than the previous year (150.97 lakh hectare). With rains failing in the kharif season, farmed area during the rabi season is expected to decline 16% over the previous year.

As many as 27,723 villages of 43,000 Maharashtra villages have now been declared drought-hit, and nine farmers killed themselves every day in 2015, IndiaSpend reported last week.

The government has spent Rs 1,544 crore to build water-conservation projects--such as ponds, wells, check dams and drip irrigation--in 6,205 villages across 34 districts as part of a programme to end water scarcity between 2014 and 2016.

It is clear that most of the irrigation potential created--meaning, the land that can theoretically or potentially be irrigated with new facilities--has been through major irrigation projects.

Across India, with every five-year plan, the gap between irrigation potential created and utilised steadily increased, as IndiaSpend reported earlier. The irrigation potential utilised--water used for farming as percentage of irrigation capacity created--was 85% from 1985 to 1992, falling to 29% by 2007.

Maharashtra’s experience with irrigation has not been promising, with the state’s irrigation potential increasing by no more than 0.1% despite spending Rs 70,000 crore, roughly since the turn of the century, as this Business Standard report noted, quoting the state’s 2014-15 economic survey.

Despite heavy spending on irrigation, the state has not managed to substantially increase the area under irrigation, and 82% of its farms still depend on increasingly uncertain rain.

Almost half Maharashtra's budget set aside for agriculture

The major spend will be Rs 7,850 crore ($1.1 billion) for irrigation, an 8% increase over 2014-15, to complete 38 projects that overshot their deadlines, according to this news report. This year, the government claimed, it would complete 28 of the 38 incomplete projects.

Irrigation is increasingly important because rainfall is likely to grow increasingly erratic, according to scientists.

(Salve is an analyst at IndiaSpend.)