The central government has still to release 46% of funds provisioned for constructing toilets under the Swachh Bharat Mission (Urban), according to this reply to the Lok Sabha (lower house of Parliament) by the ministry of housing and urban affairs on July 26, 2017.

The centre has allocated Rs 4,819 crore from October 2, 2014, when the scheme was launched, to October 2, 2019 for the construction of individual household latrines and community toilets.

The centre has cumulatively released Rs 2,595 crore or 54% of funds to state governments and union territories.

While the Swachh Bharat Abhiyan (Clean India Mission) has sent India on a toilet construction spree, between January 2015 and December 2016, it was found that 51.6% of households across the country did not use an improved sanitation facility–a system that separates human excreta from human contact -- IndiaSpend reported on May 24, 2017.

As of July 27, 2017, household toilet availability has improved from 38.7% as on October 2, 2014 to 65.71% as on July 27, 2017, according to data from the ministry of drinking water and sanitation. However, there is no third-party verification of this reported progress. 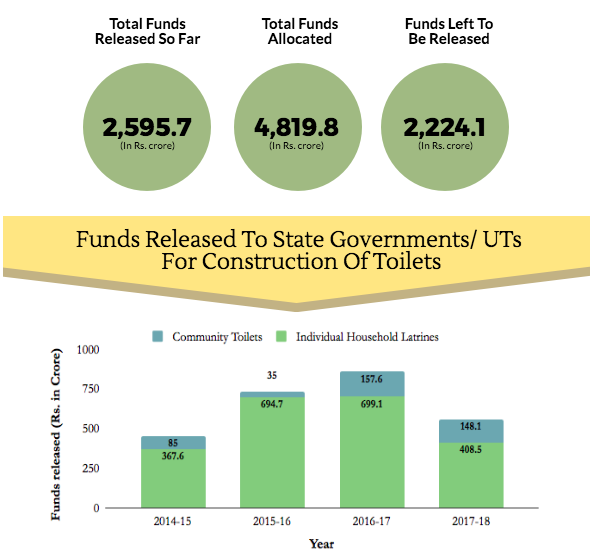 Note: Funds are allocated for the mission period 2014-19 and not on yearly basis