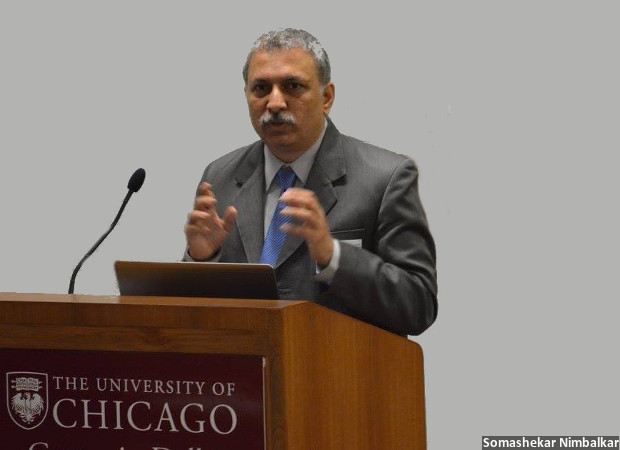 Somashekar Nimbalkar, Head of Department of Pediatrics, Pramukhswami Medical College, Karamsad, Gujarat and coordinator of the Advanced Neonatal Resuscitation Program of the Indian Academy of Pediatrics.

If more Indian mothers can be persuaded to care for their babies like kangaroo mothers do, many of the 750,000 babies younger than four weeks who die every year--the world’s highest such death toll--can be saved. Kangaroo mothers keep babies in regular skin contact, an easy, low-cost intervention that can save lives in India, Somashekhar Nimbalkar, 45, a coordinator of the Advanced Neonatal Resuscitation Program of the Indian Academy of Pediatrics, told IndiaSpend in an email interview. Although the rate of neonatal mortality has declined from 52 per 1,000 live births in 1990 to 28 in 2013, the rate of decline has been slower than that of infant and under-five mortality. But lasting change, said Nimbalkar--currently head of the pediatrics department at the Pramukhswami Medical College in Karamsad, Gujarat--can only come from transforming public-health institutions. A neonatal pediatrician, from Bangalore’s St John’s Medical College, Nimbalkar also has a degree in public health from the University of Nebraska and Asian Institute of Public Health, Orissa.

The main causes are the same across the world. They are prematurity, infection and birth asphyxia.

Q: Rajasthan, Madhya Pradesh, Uttar Pradesh, Odisha and Chhattisgarh are the states with the highest neonatal mortality rate in India. Why do these states struggle to prevent neonatal deaths?

We do not have published literature which tracks reasons for mortality state-wise. We can however speculate that poor public-health infrastructure, including poor availability of human resources, would be the reason for this. Nurses are an important component of the system and resource allocation by states for nurses and doctors is poor. The salaries in the government sector across India are not competitive, and, thus, the best do not join government jobs.

Q: Pre-term birth complications (43.7%) and infections (20.8%) are the leading causes of neonatal deaths in India. What are the factors responsible?

The cause of prematurity cannot be pinpointed, but there are risk factors which occur in those who deliver preterm babies.

Considering that most Indian adolescents are undernourished and anaemic, this can be one of the factors that can be pointed out. Also excess physical activity in poor women as well as domestic violence and bacterial vaginosis can be considered prevalent. There are no current studies which look at risk factors for prematurity in India and their relative prevalence.

Typically 50% of neonatal deaths occur in the first day of life. Thus a figure of 36.9% constitutes a reduction from earlier figures and is encouraging. Unless the antenatal care and prematurity rates improve, reduction of neonatal mortality rates will be difficult though ongoing efforts show a reduction.

Q: What impact did schemes such as Janani Suraksha Yojana and Janani Shishu Suraksha Karyakram (central government programmes that give benefits to women who seek care at government facilities during pregnancy) have on neonatal and infant health?

No studies have directly studied the impact of these programmes on neonatal and infant mortality.

JSY started in 2005 and JSSK started in 2011 have been studied for utilisation of services. However, most of the studies are qualitative and have been state-wise. Many states have not studied it. There are very few studies related to JSSK that have been published.

Quality is again dependent on provision of resources--both material as well as manpower--and using data locally for improvement.

Q: What are the low-cost interventions that can save lives of neonates in India but have not been popularised or utilised?

Kangaroo Mother care (KMC)—where babies are kept in skin-to-skin contact with their parent—faces significant challenges in its implementation across India. It is a low-cost intervention which if scaled across India can have major effect on neonatal mortality.

India has available expertise in KMC, but it is not utilised by state governments. However, no one knows how much is being given in public or private health institutions. Social support during childbirth has major advantages. While it may be used in primary health centres, it does not find support in larger centres including medical colleges.

Anaemia is a major problem in Indian women. It is a known problem and there are cheap medicines that can treat it. However, this is one area that finds no solutions in the rural landscape. Many women do not consume the tablets given.

The coverage of antenatal corticosteroids that can improve health in preterm babies is poor.

Neonatal hypothermia (abnormally low body temperature) is a major problem even in large hospitals. Temperature of newborns is rarely measured and it is missed. It is worse when newborns are transported. Most newborns received at referred hospitals are hypothermic. Hypothermia is an independent risk factor for mortality.

Exclusive and early breastfeeding rates are poor, and these have major impact on child health. Even though last-mile workers have appropriate knowledge, this is not practised by them as well as not taught to the pregnant women and new mothers.

Most state governments and central governments do not use evidence-based policy making for launch of any health programmes. The programmes are also not evaluated by academic institutions for their impact.

Implementation science and launching of complex interventions are newer arenas in which there is poor interest from policy makers. Putting money after bad policies will never give the desired results.

Also, centralised policy-making is not a good idea because health behaviour is influenced by culture and we are a culturally diverse country.

Q: Why are the challenges India faces from the shortage of healthcare resources and poor training? What could the solutions be?

Since 2005, India has made extensive budgetary allocations for rural healthcare. Whether the desired gains have occurred is not known. There has been a parallel healthcare administration setup due to this. There is also a disconnect and differential funding between the health department and the national health mission department. Additionally, the women and child development ministry looks after some aspects of health. A review by IIM (Indian Institute of Management), Ahmedabad, a few years ago had categorically stated that there is resource crunch even at central managerial level due to which a single person ends up looking after multiple programmes. Different states have different challenges and hence it is difficult to elaborate on them. The main issue is that the states do not have an idea as to how to solve the challenges. The solutions are based on good faith rather than demonstrated efficacy and hence the problems do not get solved.

Q: What are the challenges in doing good quality health research in India?

Interventions that can save lives of neonates:

- Social support to the mother during birth

- Increasing number of nurses caring for them