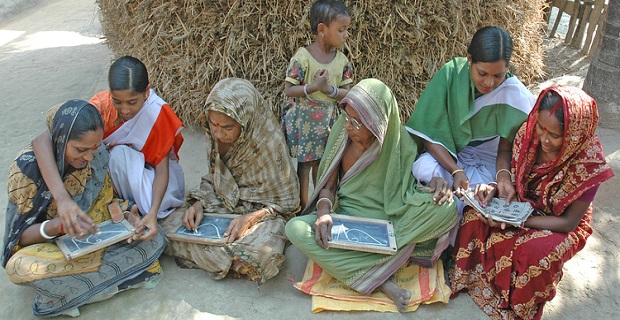 * Majority of Hindu and Muslim females are illiterate in rural areas

A poor sex ratio has been often cited as one reason for the increasing number of crimes against women in India.

The question we are asking is: can the twin forces of education and employment improve the situation at hand?

Ideally, education should help a woman figure out what is right for her while employment would give her the financial strength to make the right choice. Studies, like the one done by Aparna Mitra at the University of Oklahoma, point in that direction. And so does the data. At least, that’s what the data on some communities in India tells us.

In many parts of India, a male child is seen as being able to support businesses or agriculture or parents in their old age while girls are viewed more as an economic liability. IndiaSpend had earlier looked at the National Sample Survey Organisation (NSSO) data on how religious communities are placed on various parameters like income and education. And we observed that some communities were much better compared to others.

Another fact was that the status of women was better in the well-off communities. Christians and Sikhs, for instance, have the highest number of women who have studied in the secondary school and above category in both rural and urban areas. And Christians have better sex ratio compared to other communities.

The situation is slightly different for Muslims: the ratio declined sharply from 990 to 921 in rural areas but improved to 923 from 912 in urban areas in the same period.

So, why does a particular community do better than the others when it comes to sex ratios? We could look at education and employment numbers to explain the issue. And we could also try and analyse the link between employment and education. 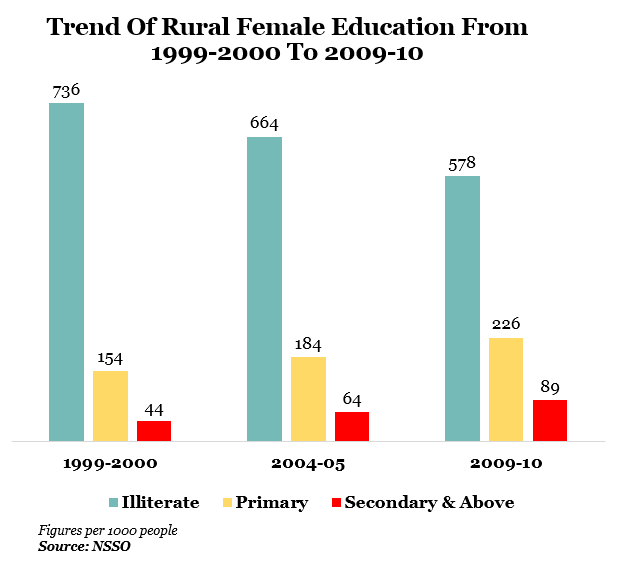 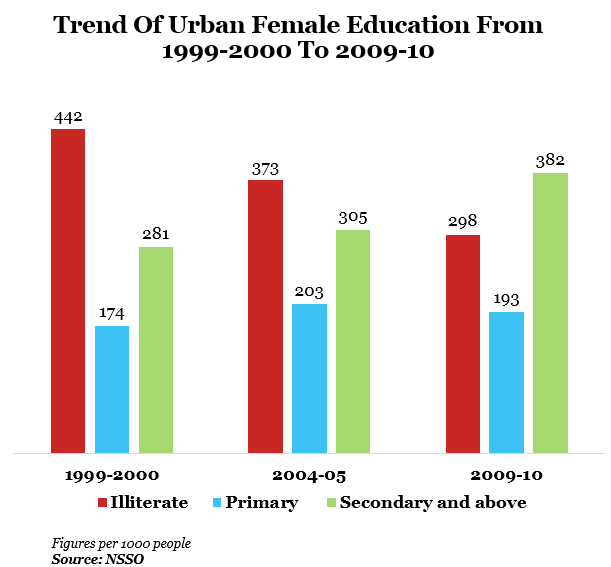 The Sikhs actually saw a drop of 10% during the same time period for primary education. In secondary education and above category, Sikhwomen have seen the highest increase of 81%.

In urban areas, the number of females accessing secondary education increased 35% and primary education by 11% during the same time. The highest increase in female literacy was seen among Hindu females, and there was an increase of 5.4% among Sikh women during 1999-2000 to 2009-10.

The highest increase in primary education was seen among Sikh females with 44% while Christians actually saw a drop of 17% in the same category. Muslim females have the highest percentage (54%) in the secondary and above category. 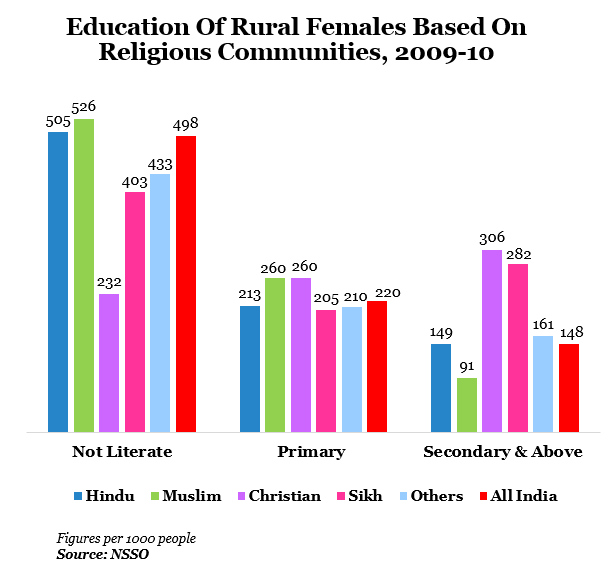 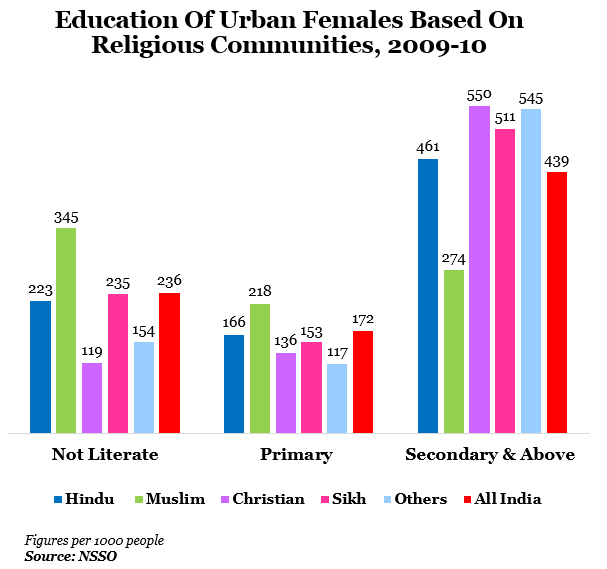 It can be seen that the majority of Hindu females are illiterate in rural areas while only 213 females (per 1,000 females) have studied up to the primary level. And only 149 have studied till secondary and above. If we look at the Muslim community, the situation is even bleaker with 526 females who are illiterate while 260 females study up to primary and only 91 study beyond.

Now, let’s look at the employment data, starting with the overall numbers: 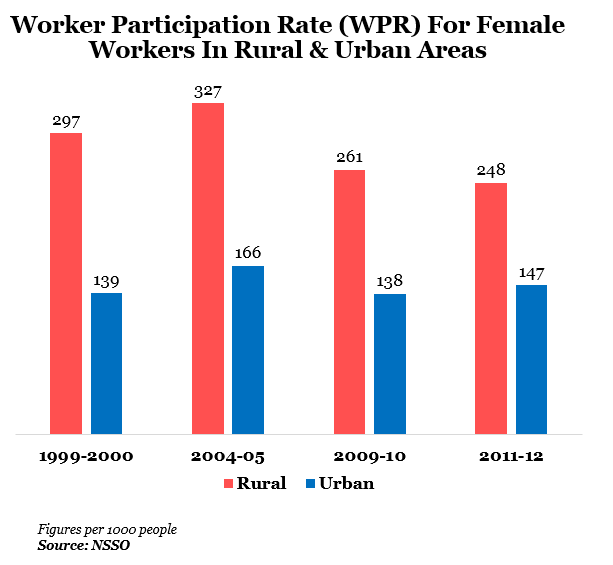 We will now look at the community-wide worker participation ratio. 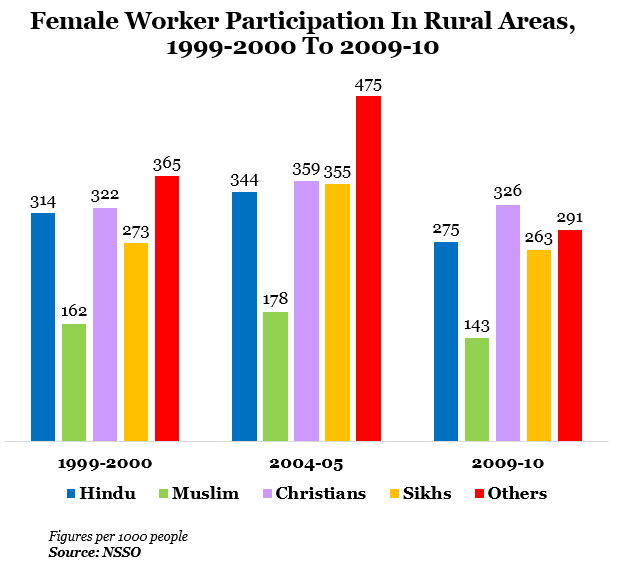 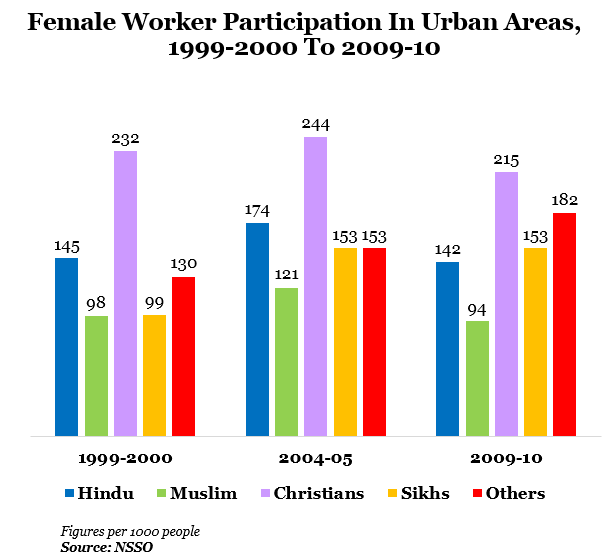 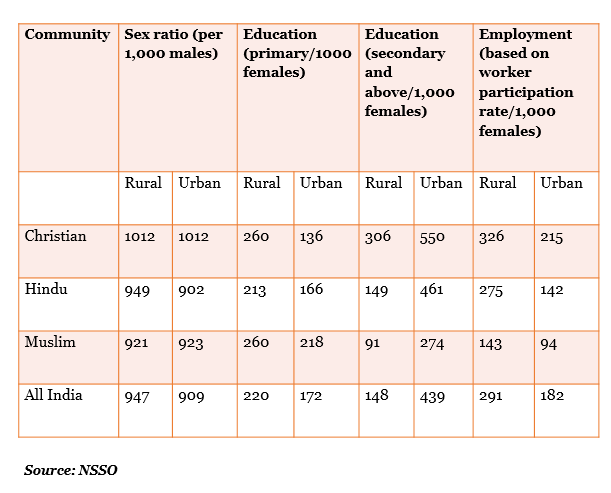 Communities where greater number of females are educated and have a higher worker participation rate tend to have a better sex ratio. For example, the Christian community have a better sex ratio compared to other communities. They also have the highest number of educated females in primary and secondary level in rural areas and the highest worker participation rate in both rural and urban areas.

We must, however, keep in mind that Christians and Sikhs represent only 2.3% and 1.3%, respectively, of the population.

What is clear (at least from the reading of these sets of data) is a relationship between the improvement of sex ratio through education and greater employment. Other sociological factors, which cannot be quantified like attitudes of families and the impact of a patriarchal society, would also be playing a role.

Among the factors that policy makers should address to solve a whole lot of larger problems, education for women is clearly an important one. There is no blinding insight perhaps in this. There is, however, the price to pay. As we are only too painfully aware.