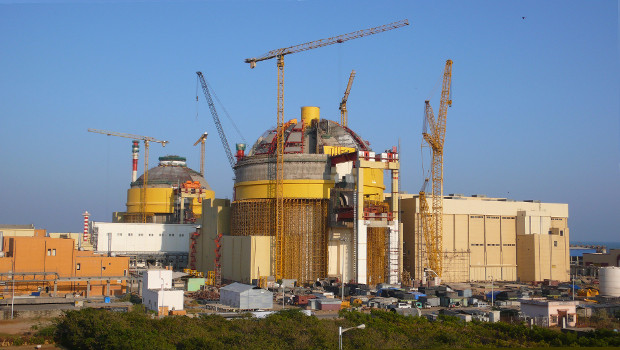 Construction work at the nuclear power plant in Kudankulam, Tamil Nadu in January 2013.

An agreement with the Canadian company CAMECO, one of the world’s largest uranium producers, was one of the highlights of Prime Minister Narendra Modi’s recent three-nation (Germany, France, and Canada) trip.

CAMECO will supply India with 3,000 tonnes of uranium over six years, enough to keep 2,300 megawatts (MW) of India’s 5,780 MW of nuclear-power plants running.

A similar agreement was concluded with Uzbekistan in 2013, and India is trying to close a fuel supply agreement with Australia, which has the world’s largest reserves of uranium. These agreements are in addition to those already inked with Russia and Kazakhstan.

Agreements for supply of nuclear fuel (year of signing)

These agreements may be part of the solution to India’s air pollution problems. India is trying to move away from using coal, which accounts for almost 80% of India’s electricity generation and is highly polluting.

Nuclear power accounts for 3.5% of India’s electricity generation and 1.3% of India’s total energy consumption, but the government has set some ambitious targets.

Nuclear energy does not emit carbon dioxide and other pollutants—major concerns, given the air-quality crisis in Indian cities and the widespread economic effects of local and global climate change.

However, nuclear power comes with potentially catastrophic safety risks, which India hopes to keep under check. Other countries weigh the risks similarly, although Germany intends to close nuclear plants by 2022.

The problem with nuclear fuel

Arranging affordable nuclear-fuel supply has been a challenge for India.

Electricity from gas is also 2-3 times costlier than nuclear power depending on gas prices, a concern in an emerging economy.

But scaling up nuclear energy is a problem. Of 5,780 MW of nuclear-power capacity that India operates, 3,380 MW relies on imported fuel. Domestic uranium supplies are enough only for the remaining 2,400 MW.

Historically, India’s nuclear power programme has been constrained by a uranium shortage. The programme started to grow only after the Indo-US nuclear agreement of 2008, which allowed India to import nuclear fuel and ink agreements with fuel suppliers (see Table 1).

India has 3,800 MW of nuclear-power capacity under construction and another 43,100 MW is proposed. Of this, 1,000 MW of under-construction capacity and 31,900 MW of proposed nuclear capacity will be built in collaboration with companies from the US, France and Russia. For these reactors, the contractors must provide fuel throughout a plant’s life, which can last up to 50 years.

For the remaining 14,000 MW of indigenously designed nuclear capacity, India needs to source fuel. Domestic uranium supplies, as we explained, are inadequate.

Moreover, domestic uranium also has other uses—to build nuclear weapons—and using it only for fuel is not something India would like to do.

How much uranium does India need?

India currently needs almost 500 tons/year of uranium ore concentrate or uranium dioxide pellets–both of these are similar in uranium content (~3% difference). By 2019, this requirement may go up to 1,000 tons/year and 1,500 tons/year by 2024.

Uranium dioxide pellets are used to power pressurised heavy water reactors–which India has designed and built indigenously. India needs to source fuel for these reactors by itself and this is why there are agreements with different suppliers. India needs to tie up more uranium supplies to keep these reactors fuelled.

India also imports enriched uranium dioxide pellets, where the U-235 content, the radioactive isotope of uranium which generates energy through decay, has been raised after processing. These pellets are used to fuel the light water reactor that India has built at Kudankulam using Russian design. This reactor requires 25 tons/year of enriched pellets, but the requirement will increase to 50 tons/year by the end of this year, as a second unit gets commissioned.

The other reactors, planned with Areva, GE and Westinghouse will also use enriched uranium dioxide pellets. However, the technology partner is responsible for sourcing fuel during the reactors life-cycle, so this is not India’s headache.

How We Estimated Uranium Demand

Uranium ore concentrate needs to be changed to uranium dioxide pellets for use in India’s pressurised heavy water reactors (PWR). However, the difference in uranium content of the two compounds is marginal–100 tons of U3O8 will have 84.7 tons of uranium, while 100 tons of UO2 will have 88.1 tons of uranium. So there isn’t much difference between the two.

PWRs require 0.7% U-235 by weight. U-235 is the radioactive isotope of uranium–it is the decay of this isotope that generates nuclear energy. India currently has 4,780 MW of PWR in operation, of which 2,380 MW is under IAEA safeguards and can use imported fuel.

In enriched uranium dioxide pellets, the U-235 content has been increased to 4.8%—making them suitable for use in light water reactors (LWR). This is the kind that has been put up in Kudankulam (1,000 MW) or the reactors that are proposed to be built in collaboration with Areva, GE and Westinghouse. Light Water Reactors are the dominant technology globally—the reactors being built with Russian, US and French collaboration are all LWRs.

Update: The story has been updated with more information on India's uranium demand and an expansion of the table detailing India's energy mix.