Can India’s Urban Poor Ever Hope For A Better Future? 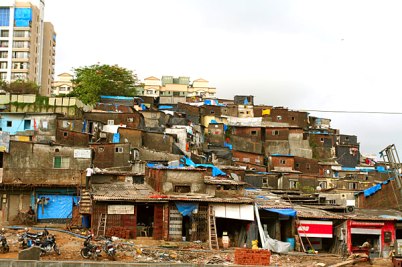 Cities like Mumbai are widely known to have failed in controlling the rapid growth of slums, often to a scale – like Dharavi – where they acquire near cult status. Unfortunately, despite all the fame and infamy, the solutions to the dark side of urbanisation have been few and far in between.

Let’s understand the scale of the problem first. An estimated 26% of urban India still subsists on income below the poverty line. More than 80% of their income is spent on food and energy, leaving little for anything else. An estimated 93 million people (in 2011) were living in slums that lack civic and social amenities like clean drinking water and security.

A quarter of India’s urban population lives in notified and non-notified slums –as high as 54% in Mumbai, 46% in Faridabad, 45% in Aligarh and 44% in Meerut (2001 Slum Census data). This shows the failure of the urban planning system and urban land management practices that have not been able to adapt and accommodate the urban poor.

Although BSUP and IHSDP managed to stir some interest, they could not facilitate the granting of legal property rights to the urban poor. Property or ownership rights, most economists and social scientists would argue, are important steps in empowerment and urban poverty alleviation. A new programme - Rajiv Awas Yojana (RAY) - hopes to address this gap.

RAY, launched in June 2011, plans to tackle the slum problem in a holistic manner. It proposes to use a multi-pronged approach that brings existing slums within the formal system and enables them to avail of the same basic amenities as the rest of the city or town.

The scheme is expected to cover 250 cities by the end of the Planning Commission’s 12thPlan (2012-2017). In the first or the preparatory phase of the scheme, nearly Rs 100 crore has been released among 162 cities. Uttar Pradesh (UP) has the highest number of cities (19) and a total of Rs.7.33 crorereleased under the scheme followed by Maharashtra (18 cities, Rs.9.45crore).

The selection of the cities will be done by consultation, and the states have been asked to include mission cities of JNNURM in the scheme. Cities with a population of more than 0.3 million and other smaller cities with due consideration to the pace of growth of slums, pre-dominance of minority population and areas where property rights are assigned will also be considered for the scheme.

Services For The Poor

The BSUP was planned to ensure provision of basic infrastructure services to the urban poor at affordable rates. The duration of the mission is 7 years and was launched in 2005. The mission is being carried out in 65 selected mission cities.

The IHSDP is designed for slum improvement and rehabilitation for smaller town /cities. The central assistance, in general, under the programme is 80% while special category states will receive 90% of central assistance. The beneficiaries will have to contribute 12% for houses while SC/ST/BC/OBC/PH and other weaker sections will have to contribute 10%.

Progress of BSUP and IHSDP

Total funds allocated for IHSDP is Rs 6,828 crore. While the additional central assistance released is Rs 4,320 crore, Rs 1,225 crore has been utilised. The number of IHSDP projects completed are 0.43 million units out of the total approved 0.57 million units i.e., a completion rate of 75.6%.

Table 2: Housing For the Poor

A key reason for the weak performance of the two programs - BSUP and IHDSP- is land acquisition, especially in cities. Another issue is that detailed project reports and identification of beneficiaries is very difficult. This leads to resistance from beneficiaries at the time of the execution.

Even though BSUP and IHSDP have been moderate success stories and have managed to address some problems of the urban poor, these schemes, like other JNNURM projects, have also suffered from delays in execution, leading to resistance from beneficiaries.