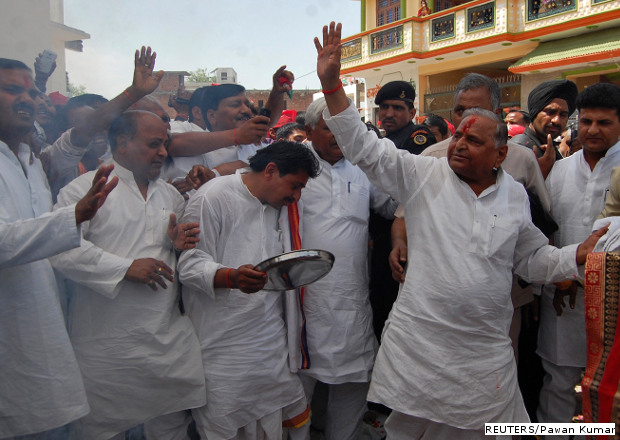 The followers of former socialist leaders Ram Manohar Lohia and Jayaprakash Narayan, currently running their own parties, are planning a grand union to form a new party, whose name will be either Samajwadi Janata Dal or Samajwadi Janata Party.

The aim: take on the might of Narendra Modi-Amit Shah led Bharatiya Janata Party (BJP).

The six parties in the process of uniting are:

Samajwadi Party leader Mulayam Singh Yadav has been authorised by the parties to oversee and plan the merger, according to media reports.

The immediate focus of the new party would be the elections to the 243-seat Bihar assembly scheduled for the end of the year.

Here are the seat positions of the six parties in the Lok Sabha, Rajya Sabha and state assemblies.

How The Grand Alliance Will Pan Out

The new party will have 15 members in the Lok Sabha and 30 in the Rajya Sabha.

So, will this be a redux of the grand experiment of 1977 – Janata Party.

For next-gen readers, here is a flashback to India’s political past:

Indian Prime Minister Mrs. Indira Gandhi imposed a state of emergency in the country after she lost a case in 1975. An Allahabad High Court verdict found her guilty of using corrupt electoral practices to win an election in 1971.

Opposition leaders, including Jayaprakash Narayan, Jivatram Kripalani and Morarji Desai, led the resistance movement, which led to the formation of Janata Party to contest the general elections in 1977.

Janata Party swept the polls, and Congress was ousted from power in India for the first time after 30 years of independence in 1977.

Now here is a rewind of history:

While Janata Party swept the elections in northern India, the Congress could still win over 150 seats, mainly due to its victories in southern India.

And a similar scenario unfolded in the 2014 elections.

While Bharatiya Janata Party (BJP), a successor to Jana Sangh, won 282 seats, mainly from the North, Congress won majority of its seats from South India, as IndiaSpend reported earlier.

While the two political scenarios are not comparable, can the coming together of six regional forces in north, east and south change the electoral dynamics?

Will the new alliance be able to swing the voters’ mood in Bihar? Has the Modi Magic waned?

While the Janata Party experiment could not last more than three years (the party was split by then and Mrs. Gandhi won the general elections in 1980 with a thumping majority), will the 6-party alliance work this time?

We will know by the end of this year.