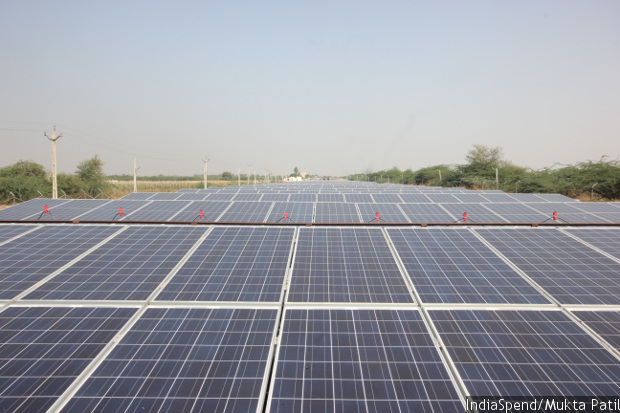 The world’s fourth-largest producer of greenhouse gases now warming the world at an unprecedented pace, India--which currently is failing to meet its targets or even transfer to industry a clean-energy tax it is collecting--has promised to nearly quadruple its renewable-energy capacity over the next six years.

To do that, Budget 2017 will have to make lending to the renewables sector easier--we explained here why that is a problem--accelerate skill development and consider new financial issues, including the new Goods and Services Tax (GST), according to our analysis.

India currently has one of the largest renewables expansion programmes in the world, aiming as it does to install 175 GW of capacity by 2022--nearly four times as much as today’s 46 GW--and in line with its Intended Nationally Determined Contribution, the technical term for the promise it made in the 2015 Paris Agreement to help cool a rapidly warming planet.

Ambitious targets and funding, but targets are off-track

To deploy new and renewable energy systems, the government has focused on a mix of subsidy, fiscal incentives, preferential tariffs, market mechanism and affirmative action such as renewable purchase obligations by way of legislation and policies, according to this 2015 paper by The Energy and Resources Institute, a think tank based out of New Delhi.

All of these measures are affected by the Union Budget.

The MNRE also publishes a yearly outcome budget, which details achievements of the ministry against outlay, which is not available in the budget estimates prepared by the ministry.

Here are the outputs that the ministry has published in its "outcome budget" for 2015-16.

Despite the large outlay for solar energy projects, there is a marked gap between the targets and achievements. For example, against the target of installing 12,000 MW of solar capacity in FY 2016-17, by December 2016, only 2,150 MW had been installed.

“We believe that this disparity is primarily owing to the rooftop solar space, where the progress has been slow,” said Jai Sharda, Managing Partner at Equitorials, a financial research firm focusing on energy policy.

“There may be budgetary incentives for faster adoption of rooftop solar. A number of states have recently formulated their rooftop solar policies. Once they are operationalised, we will see a higher growth in this segment as well,” said Sharda.

Rooftop solar projects will provide for 40% of India’s solar target of 100 GW by 2022. By November 2016, only 0.5 MW of solar rooftop capacity was installed, while 3 GW was sanctioned and under installation, according to this December 2016 MNRE update.

Government levies, gathers clean-energy tax, but less than half transferred

The Clean Environment Cess (earlier known as Clean Energy Cess), a kind of carbon tax levied upon coal, lignite and peat, doubled from Rs 200 per tonne to Rs 400 per tonne in the 2016 budget.

Earnings from the cess were to be transferred to the National Clean Energy Fund (NCEF), which would then finance and promote clean energy initiatives and fund research into clean energy.

Much of the fund’s expenditure is allocated to budgetary shortfalls of other ministries or for programmes not directly linked to clean energy, according to a review by the International Institute of Sustainable Development’s Global Subsidies Initiative, an independent not-for-profit organisation focusing on sustainable development.

“What one wishes from the budget is for it to more effectively deploy funds collected under the Clean Environment Cess to renewable energy,” said Sharda. “We believe that it can be used by the policymakers to encourage more private, especially foreign, investments in the renewable energy space.”

Keeping up the pace of investments in India, adding skilled labour

The year 2015 was the first year in history when investments in the renewables sector made by developing nations surpassed those made by developed nations, helped in no small part by China.

India’s budget for 2017-18 will be key to keeping up this pace of investment, in the race to reach its target of 175 GW of installed renewable capacity by 2022. This cannot happen without cheap financing options.

In terms of employment generation, India, along with China and Brazil, were the largest employers in the renewables sector in 2015.

India will create 1.1 million jobs in the solar-energy sector and 183,500 jobs in wind energy by 2022, according to this November 2016 fact sheet Council on Energy, Environment and Water, a New Delhi based think tank.

To prepare for this scale of job creation, the budget will require to provide for skill development. The government already has a programme in place called Suryamitra (friend of the sun), run by the National Institute of Solar Energy.

Future of renewables vis-à-vis the GST, reduction in depreciation

The GST is a single indirect tax to be levied on all goods and services.

The government proposed that taxes on consumption or sale of electricity should stay outside the GST. However, implementation of the GST on the renewables sector will adversely impact their production costs.

Left as is, the implementation of the GST could warrant an increase in tariff of 30-40 paise for wind-generated power, and 40-50 paise for solar, according to this Mint story published on January 23, 2017.

Another fiscal incentive in the wind sector, called Accelerated Depreciation (AD), which allowed investors to claim 80% of depreciation value in the first year, in order to write off their investment more easily, has been reduced to 40% from April 2017.

AD has been one of the key factors for increased wind installations. Other schemes, such as Generation Based Incentives--where a sum over the approved tariff is paid to renewable energy generators--or a further budget push in some form will have to make up for the 40-percentage-point reduction in the AD incentive.

This is the second of IndiaSpend’s budget primers. You can read our education budget primer here. We will also be fact-checking the statements made during the budget on February 1, 2017, on our Twitter timeline here.