Budget 2013: Here’s What The Government Is Really Betting On 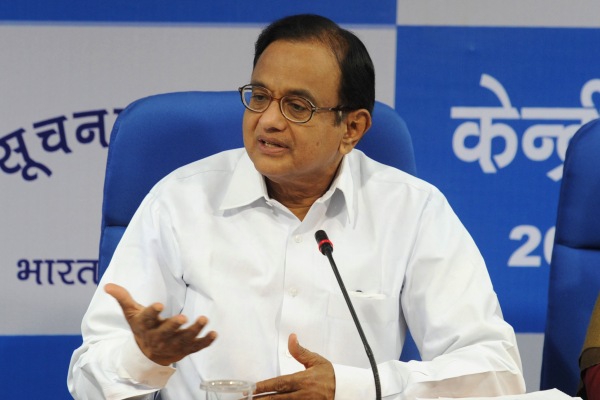 India’s Union Budget 2013-14 was presented on February 28, 2013 against a backdrop of a slowing economy and stalling investment.

IndiaSpend contributor Anupam Gupta takes a closer look at the Budget papers and finds the numbers reflecting an attempt at maintaining balance between supporting social spend and fiscal consolidation. He also brings out detailed numbers on what the Government is really betting on when it comes to managing its balance sheet better. The verdict is of course your’s.

As a broad target, Finance Minister P Chidambaram is targeting a 21% increase in revenue receipts and a 16% increase in total expenditure to limit the fiscal deficit at 4.8% of GDP in 2013-14 while nominal GDP growth has been assumed at 13.4%.

While targets outlined in the Kelkar Committee Reporton fiscal consolidation have been adhered to, the Finance Minister expressed concern over the Current Account Deficit (CAD) and the need for $75billion in FY13 and FY14 to finance the CAD – mainly through Foreign International Investors (FIIs), Foreign Direct Investment (FDI) and External Commercial Borrowings (ECBs).

For 2013-14, the total expenditure has been forecast to increase 16% (as compared to 10%). This will be led by a step-up in plan expenditure growth of 30%. Headline growth rate appears high, given that in FY13, the plan expenditure growth was just 4%. The Government is also targeting to restructure Centrally Sponsored Schemes (CSS) to 70 programmes and also limit Additional Central Assistance (ACA) for these programmes. 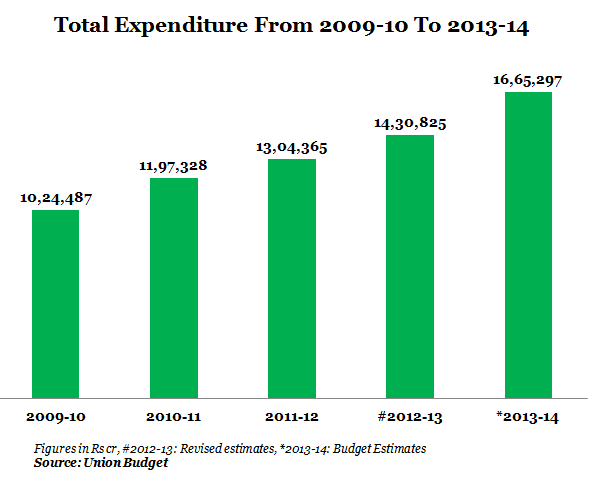 The ministries that saw a sharp jump in plan expenditure allocations in FY14 include Road, Transport and Highways (47%), Rural Development (43%), Health & Family Welfare (33%) and School Education and Literacy (16%). 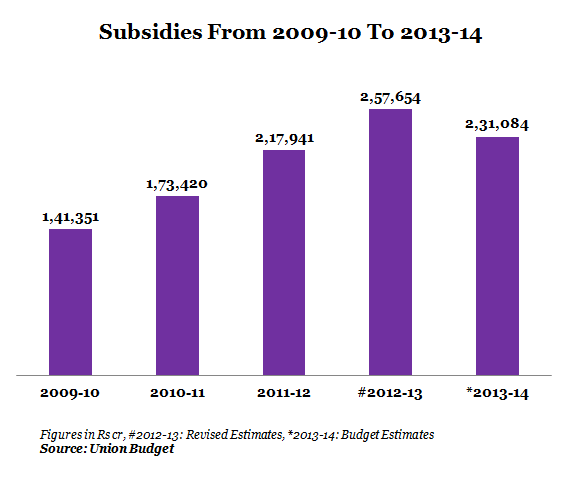 Uptick in economy expected to drive growth in tax collections

Budget 2013-14 assumes a 19% growth in gross tax revenue, led by a 36% increase in service tax collection and 20% increase in income tax while corporation tax (17%) and excise duties (15%) grow at a relatively lower pace. Given the 13% nominal GDP growth (this includes inflation) in FY14, the tax growth assumptions appear optimistic, considering the ongoing downturn in the economy. The 19% growth is also a tad higher than the 10year (FY03-13) average growth rate of 17%. 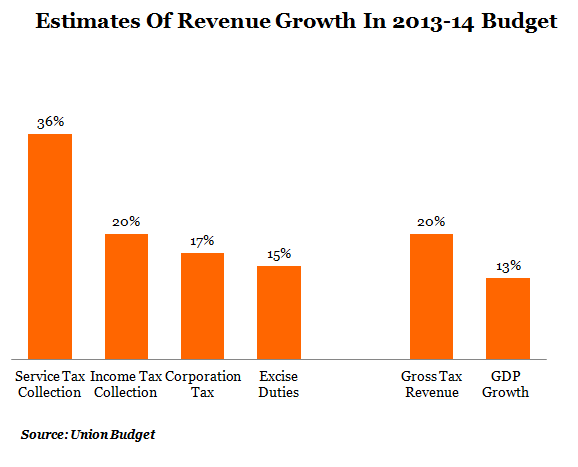 Interestingly enough, non-tax revenues are pegged to grow at a higher 33%, led by a 45% increase in other non-tax revenues and 33% increase in dividends and profits mostly from public sector units. Similarly, miscellaneous capital receipts are forecast to more than double to Rs 55,814crore, given that the Government is targeting proceeds of Rs40,000 crore from divesting stakes in companies like Coal India and Indian Oil.

The fiscal deficit of Rs 5,42,499 crore is to be funded mainly by market borrowings of Rs4,84,000crore and the balance through short-term borrowings, external assistance, etc.

Direct tax rates and income tax slabs were maintained but as a sop to lower income households, the Finance Minister proposed a Rs 2,000 credit to every person earning between Rs2-5 lakh. While the much-talked about super rich tax was not introduced, the Finance Minister has proposed a levy of a surcharge of 10% on individuals whose taxable income exceeds Rs1crore. This would take effective tax from around 33 to 36%.

In a further attempt at taxing high ticket transactions, the Finance Minister has proposed tax deduction at source or TDS of 1% on value of transfer of immovable properties where the value of the deal exceeds Rs50 lakh (excluding agricultural land).

Finally, on indirect taxes, while excise duty, customs and service tax rates were maintained, the Finance Minister hiked rates across some categories, for example: excise duty on Sports Utility Vehicles (SUVs, excluding taxis)was raised to 30%, excise on mobile phones priced above Rs2,000 was raised to 6% and excise duty on marble from Rs30 per square meter to Rs60 per square meter. Levy of service tax was extended to all air-conditioned restaurants, and a Voluntary Compliance Encouragement Scheme has been proposed to push service tax assesses to file returns and pay the dues.

So, while the middle class can heave a sigh of relief with no new taxes, there are no specific measures to boost savings at a time when rising consumer price inflation has eaten into household savings. To sum up, Budget 2013-14 is betting on containing fiscal slippage but has paid lip service to stoking growth for industry.