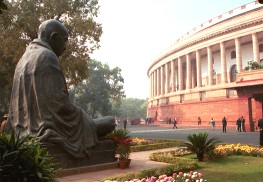 India’s budgetary pronouncements are often analyzed in the context of the many spending programmes successive Governments have initiated over the years – and the 2013-2014 Union Budget is no different.

Many of these programmes draw criticism for their faulty design & less-than-effective implementation. Nevertheless, these programmes have helped the Government focus efforts in a manner that would have otherwise been difficult to achieve.

It is also the newest programme on the list – having been kicked off just seven years ago in 2006. The oldest flagship programme –The National Rural Drinking Water Programme – is over 40 years old, and was implemented under a different name in 1972. Yes, names tend to change over the years.

Six of the ten flagship programmes are targeted at rural areas focusing on employment, health, development, water, housing and electrification. Of the other four programmes, only one solely focuses on urban areas targeting development issues. The other three programmes are nationwide and focus on children’s education and development.