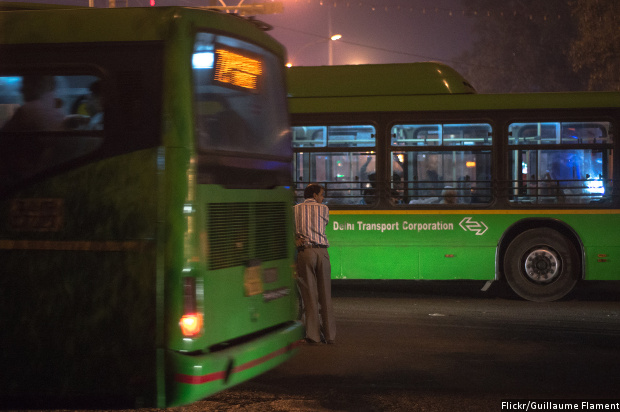 As Delhi's odd-even road-rationing for vehicles restarted yesterday for 15 days, the positive response of last time will be difficult to sustain through forced compliance and the absence of incentives to use public transport.

Studies conducted over the last four years at the Indian Institute of Technology (Delhi), published in global journals and conferences (some of which are here, here and here) surveyed commuters who did not use buses for their daily commute to work. When we categorised them by monthly income, we found that more than 39% of commuters in the least income group (less than Rs 30,000 per month) used a car for commuting.

This implies commuters in Delhi are reluctant to use buses, which carry 42% of all commuters (25% use the metro and 25% use private vehicles), primarily because they perceive buses as being overcrowded, according to our research. Fare, safety and security are minor concerns.

Despite having India's largest metropolitan road network, Delhi roads are congested because it also has more vehicles than any Indian city: three million cars and 5.5 million two-wheelers, with more than 1,000 added every day, according to Delhi Statistical Abstract.

Existing bus users want more buses to be added to the system and do not expect any major systemic law-and-order overhaul, our research implied. Public transport will need to become as attractive as personal vehicles, even more, in order to shift people away from private vehicles.

Overcrowded buses were the leading concern even of those who did not use buses, our perception analysis showed.

Timeliness, directness, punctuality and accessibility were the other concerns. Clearly, adding buses is a necessity to expand the reach of buses and shift people away from cars.

These interventions include separate lanes for buses, similar to the now-dismantled BRT, and a congestion charge for private vehicles. Both serve a dual purpose: they persuade commuters to use buses by giving them privileged access (as they should, since they cause less congestion and pollution per passenger-kilometer) and disincentivise private vehicles by reducing their access and imposing fair/acceptable financial penalties for causing more pollution per passenger-kilometer.

The international experience of such interventions is positive.

For example, in 2005, more than half of the residents of Stockholm, Sweden were not satisfied with implementation of a congestion charge, but they later accepted it and appreciated the reduction in travel-time and use of private vehicles, according to this study.

In Delhi, if done carefully, such congestion charging alone can move more than 5% of non-bus-users to buses, according to our study.

Additionally, supply side interventions, such as more buses to ensure standing and sitting space, more direct links and integration of public transport for hassle-free ticketing can get more users on board.

(Our on-going research--almost done--uses sophisticated mathematical modeling to determine how buses can be optimally added/reassigned to different routes in the network, incorporating given policy constraints. We are also developing methodologies to address other commuter concerns.)

Up to 60% commuters currently using private vehicles expressed willingness to move to buses, if there are more buses, more direct links and more space.

We also found that existing bus commuters do not see higher fares as an inhibiting factor, implying that bus fare--the minimum is about 28% and 67% lower in Delhi than Mumbai for AC and non-AC buses respectively--can be increased without affecting ridership.

Lastly, a hike in parking fee and innovative parking as infrastructure, such as the Sarojini Nagar multi-level parking, are other ways to reduce traffic congestion and subsequently pollution. In Delhi, the monthly parking fee is low by global standards. In general, Indian cities charge 13 times lower parking fees than Hong Kong, China and more than 20 times lower than Singapore.

Our findings confirmed, as did the positive response to the odd-even scheme, that Delhi commuters are willing to use public transport--if implications of indiscriminate private-transport use are explained and appropriate policy-governance interventions are made.

Vehicular pollution in Delhi can be controlled by taking difficult steps beyond "odd-even" to rid the city of congestion, incentivising the use of public transport, and a milder-than-odd-even disincentivisation of private transport.

(Bolia holds a PhD in Operations Research and is Associate Professor in IIT Delhi's Department of Mechanical Engineering.)