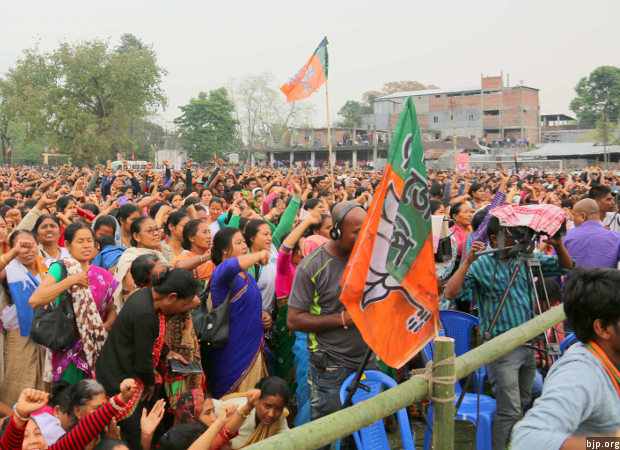 Higher-than-expected voter turnout of a record-breaking 84.7% in Assam has been making headlines since the assembly polls ended on April 11, 2016.

Higher turnout may indicate a desire for change and could imply the possibility of a Bharatiya Janata Party (BJP) victory in Assam, according to this report.

We, therefore, set out to answer a key question: Does higher turnout translate into an anti-incumbency wave?

For example, consider a state that has election to 20 assembly seats, and in all 400 votes were polled in it. If a party secures 100 votes in a that election, its vote share is 25%. But if it contested not all 20 but only 10 seats, in which total votes polled were 200, the contested vote share is 50%.

We analysed the contested vote share of BJP and Congress in the last two elections--2011 state assembly and the 2014 Lok Sabha elections--and compared it to the voter turnout in 2014.

By sorting the assembly constituencies (ACs) in 2014 according to the voter turnout in that year, we studied the 15 constituencies with highest turnout and 15 with the lowest turnout, and analysed the performance of BJP and Congress in these extreme constituencies in the two elections.

Our findings were as follows:

A simple assessment of the vote share tells us that BJP’s performance in areas with lower turnout is better than in areas with higher turnout (48.3% versus 17.5%, respectively). 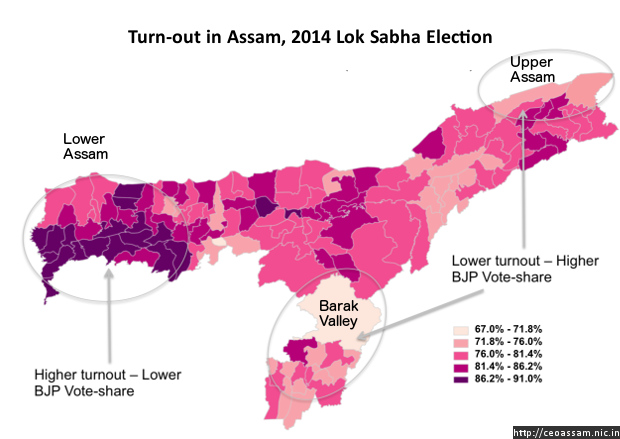 The next was to try and understand if the pattern was a manifestation of where the BJP was strong and where it wasn’t.

So, we looked at the districts these ACs belong to, and how the party performed in the same ACs in 2011.

We found that the bottom 15 ACs were in Barak Valley and Upper Assam while the top 15 ACs were in lower and central Assam, which are primarily Muslim-dominated areas.

What we see is Congress’s falling momentum across the state, and a repeat of the earlier trend where BJP performed better (16% vs. 5.9%) in the lower turnout group.

To conclude, an increase in turnout did not have a corresponding impact on BJP’s vote share. In fact, its growing presence in Assam can be attributed to its strengthening grip in Barak Valley and Upper Assam, irrespective of lower voter turnout. So, there is an anti-incumbency factor in favour of BJP but it is not related to higher turnout.

Will voters favour development and Prime Minister Narendra Modi-led BJP? Will votes be split between Congress and the United Democratic Front? Will a higher turnout in Muslim-dominant areas work for or against the BJP? We will know the answers on May 19th.

(Bhandari and Kumar are Associate and Senior Analyst at IDFC Institute, a Mumbai based think-tank.)