Supporters of the Bharatiya Janata Party cheer during a public meeting in Mandvi, Gujarat, ahead of the state's assembly elections. The BJP has won 99 of 182 seats--the least it has bagged since it first came to power in 1995 with 121 seats, shows an IndiaSpend analysis of election data.

For the sixth time in a row, the Bharatiya Janata Party (BJP) has won the Gujarat state assembly elections by a margin of 22 seats, down from 54 seats or a 59% drop from five years ago. The BJP won 99 of 182 seats--the least it has since it first came to power in 1995 with 121 seats, showed an IndiaSpend analysis of election data of the last 22 years.

Though the Congress is now in the opposition for another term, the party has made significant gains, garnering 77 seats--the most it has in 22 years since it won 45 seats in 1995, an analysis of election data showed.

The Congress party accepts the verdict of the people and congratulates the new governments in both states. I thank the people of Gujarat and Himachal with all my heart for the love they showed me.

Election results in Gujarat and Himachal Pradesh indicate a strong support for politics of good governance and development. I salute the hardworking BJP Karyakartas in these states for their hardwork which has led to these impressive victories. 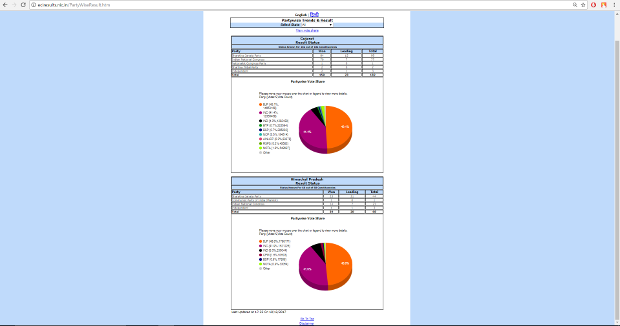 Seats and vote-share over the years

Since the BJP first came to power in Gujarat in 1995, state elections have mainly been a two-party battle that it fights with the Congress. The former has consistently won a majority of the seats and bagged most of the vote share.

The Congress’ vote share has steadily grown from 32.8% in 1995 to 41.4%, as recorded today. This is its highest growth in over two decades and it ate into the vote shares of independents and other regional parties. These small parties have claimed a vote share of 5-6% since 2002.

Making its first appearance in this assembly election, the “None Of The Above (NOTA)” option received over half a million votes (551,580) or 1.8% of over 30.4 million votes polled today, according to election data.

The BJP has retained its hold on the urban parts of the state such as Ahmedabad, Surat, and Rajkot, an analysis of constituency-level election data showed.

Away from these trade and commerce centres, in the rural areas of Saurashtra and Kutch region, votes swung in favour of the Congress.

In Saurashtra and Kutch regions, the Congress won 30 of 54 seats (55%), while the BJP won the remaining 23, an analysis of regional-level election data showed.

In northern Gujarat, a traditional bastion of the ruling party, the Congress won 17 of 32 seats (53%). In southern Gujarat, around the urban areas of Rajkot, Bhavnagar, and Porbandar, the BJP won 25 of 35 seats (71%).

In central Gujarat, in areas around Ahmedabad, and in the urban centre of Vadodara, the incumbent party won 37 out of 61 seats (60.6%). 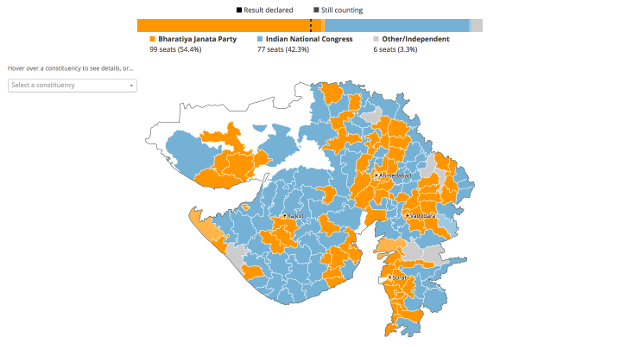 The primary reason for a Congress resurgence in rural Gujarat appear to be linked to growing rural distress. The added impact of demonetisation and the newly introduced Goods and Services Tax (GST) that affected all traders, big and small, in these parts could have added to the swing in favour of the Congress.

As 2017 began, news from India’s farms appeared good but during the course of the year bountiful harvests drove farmers to despair and calls for loan waivers rose from many states including Gujarat, as IndiaSpend reported on June 15, 2017.

Following consecutive droughts in 2014 and 2015, the good monsoon in 2016 reversed two years of rural economic decline--India’s agricultural growth, after contracting to 0.2% in 2014-15, grew to 4.1% in 2016-17, as IndiaSpend reported on June 8, 2017. But the flood of produce in the agricultural markets of many states, including Gujarat, coincided with an influx of imports and prices plunged.

The crisis was exacerbated with a below-par minimum statutory price for cash crops—Rs 800 for a kg of cotton as compared with Rs 1,300 given by the United Progressive Alliance government, according to The Hindu’s report from November 23, 2017.

Further, damage to crops from flooding in the state, and the non-payment of insurance--despite payment of premiums--alienated farmers, the Business Standard reported on November 26, 2017.

Months after the introduction of the GST on July 1, 2017, many small and medium trade units in the state were forced to shut, many more claimed heavy losses, according to this Economic and Political Weekly report from December 9, 2017.

For example, spice traders in Unjha--the hometown of Prime Minister Narendra Modi and one of the biggest spice markets in Asia--were reportedly furious as they were yet to receive refunds on the GST imposed on exports. They claimed the resulting “cash crunch” had curtailed their volume of business and exports by nearly 50%, the report said.

Unjha, a long-time bastion of the BJP since 1995, swung to the Congress in the 2017 elections by a margin of 81,797 votes, an IndiaSpend analysis of election data showed.

(Salve is an analyst and Saldanha is an assistant editor with IndiaSpend. With data inputs by Angel Kandathil Mohan and Sanjukta Nair, interns at IndiaSpend.)