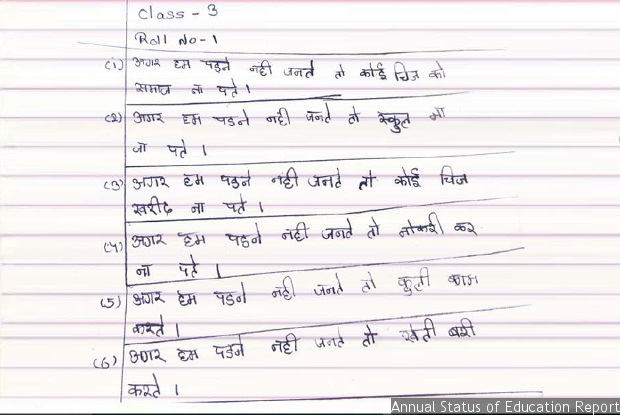 In 2016, some learning outcomes for 111 million school-age students between ages six and 15 remained mostly unchanged in BIMARU states (Bihar, Madhya Pradesh, Rajasthan and Uttar Pradesh), when compared to 2014, after declining for four years, according to the 2016 Annual Status of Education Report released in January 2017.

If the math and reading skills of these 111 million children--nearly half of India’s 252 million school-age children--cannot be improved, it is unlikely that India will be able to completely reap the demographic dividend from its working-age population of 1033 million by 2030--the largest of any country.

Here are the highlights of the new report:

Primary school math levels have also improved in Madhya Pradesh. In 2016, 13.6% of grade III students could subtract compared to 10.6% in 2014, with more improvement in government schools than private schools.

It is difficult to pinpoint reasons for the improvement or decline in learning outcomes, and reasons differ across states, Wilima Wadhwa, director of the ASER centre, told IndiaSpend. Still, indicators such as the pupil-teacher ratio have been linked with better learning outcomes.

While the prescribed pupil-teacher ratio (PTR), according to the Right to Education Act (RTE), is 30:1 for primary schools, and 35:1 for upper primary, only 11.7% of Bihar’s schools follow these guidelines--the lowest across India--a decline from 12.7% in 2014.

Though the PTR has improved in UP, with 30.9% of schools following RTE guidelines, compared to 16.1% schools in 2010, it is still one of the states with the lowest proportion of such schools in the country.

Lack of useable toilets have also been linked to falling learning outcomes, as children have to leave the school to use a toilet, and often do not return to class, according to this comment by the Centre for Policy Research, featured in The Hindu in September 2014.

Overall, UP has the lowest number of schools equipped with useable toilets (54.8%) in India.

MP--the state which is reported to have constructed the second-most number of toilets, after Gujarat, in 2015--has 54% of schools with a separate, functioning toilet for girls, the lowest among the BIMARU states.

(Salve is an analyst, and Saldanha is an assistant editor with IndiaSpend.)