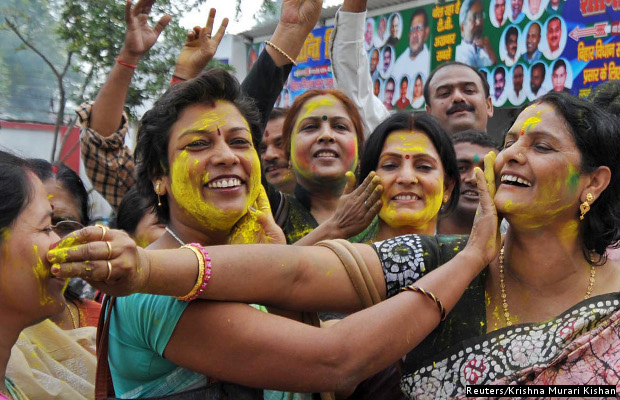 Bihar may still be one of India’s most backward states, but when it comes to female political representation, it is among the country’s best.

The state of 104 million people has 34 female MLAs (next only to Uttar Pradesh's 35), one of the highest in the history of female representation in India’s state assemblies and the highest-ever in the state’s history. By proportion, 14% of Bihar’s state assembly is female, second only to Haryana (14.4%), reveals an IndiaSpend and GenderinPolitics analysis of electoral data.

With elections just a couple of months away, all eyes are on the big political stage that is Bihar, which—as IndiaSpend had reported earlier—has improved under Nitish Kumar but remains one of India’s poorest states. Bihar has 28 million illiterate women, India's lowest level of female literacy (53%) and employment, with the female labour-force participation rate 62 percentage points below the male rate.

In the calculus of caste, religion and party alignment, women voters—roughly half of Bihar’s electorate—continue to play a traditional, largely silent role on the political sidelines, despite their political advancement.

Women political representatives, whether MPs, MLAs or those in panchayats (village councils) and urban local bodies, are often spoken of as footnotes, often dismissed as proxies to powerful male relatives and colleagues. Yet, there is no question that their numbers have risen.

This story is the first of an occasional series that will focus on Bihar’s female MLAs through a data-driven analysis.

It took half a century for Bihar to elect 34 female MLAs in the 2010 assembly election.

The electoral history of Bihar reveals conflicting trends in the political representation of women.

The year 2005 was a watershed year for women’s representation in Bihar. After a gap of 45 years, representation of women was 10% again, an increase of 31.5% (six seats) over the previous assembly of 2000.

In the second elections held that year (there were two elections in February and October 2005), and after the bifurcation of the state into Bihar and Jharkhand, women made up 10.3% of the state assembly.

Female political leadership is clearly on the rise

What accounts for the rise in women MLAs since the 2000 elections?

One clear factor is the increase in number of women contesting the elections. The second factor could be a rise in the number of constituencies they have been contesting.

However, in 2010, women contested from 74% of constituencies.

This could be due to a substantial spike in the number of seats that women contested from in the last elections.

One of the main factors for the rise of women’s participation in Bihar, perhaps, could be the 50% reservation for women in panchayats.

Bihar was the first state to implement the reservation in 2006, which might have created an enabling environment for greater political participation.

Prior to that, women had 33% reservation in panchayats. Subsequently a few other states, such as Madhya Pradesh, Chhattisgarh, Uttarakhand, Andhra Pradesh, Odisha, Rajasthan, Kerala and Karnataka, have implemented the new rule.

The most-popular female MLAs and their strongholds

Uma Devi Pandey (INC), elected to represent Baniapur constituency, holds the distinction of having been elected an MLA most frequently; 11 women have been elected three times or more to the vidhan sabha.

In the next part of this story, we will look at some of the women MLAs in the current vidhan sabha, and explore the question: Are these women really proxies for male relatives or spouses?