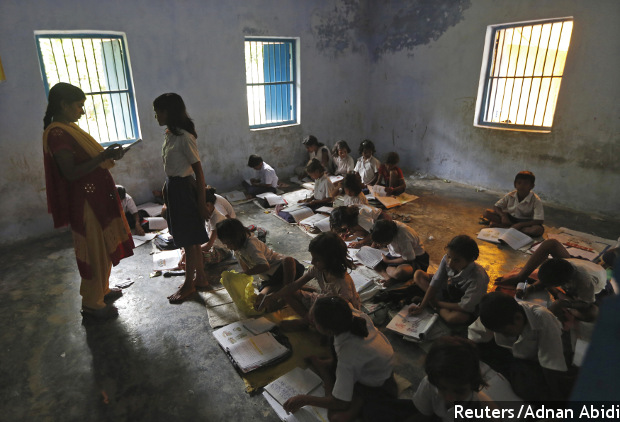 School children study inside their classroom at a primary school, in Brahimpur village, Chhapra district, in Bihar. The state has 37.3% fewer teachers than it needs in elementary school (grades I to VIII), and is short of 278,602 teachers, according to our analysis.

It has more illiterate people--by proportion--of any Indian state, and although literacy rose 14.8 percentage points over a decade to 2011, there is a crisis in Bihar's primary education system: Its classrooms are India's most crowded and have the fewest teachers, yet India's sixth poorest state spends the least money per student, according to an IndiaSpend analysis of various government data.

Of six million teaching positions in government schools nationwide, about 900,000 elementary school teaching positions and 100,000 in secondary school—put together, a million—are vacant, as IndiaSpend reported in December 2016, according to an answer given in the Lok Sabha (lower house of Parliament). Of these, at least 200,000 vacancies are in Bihar's government elementary schools.

As the first part of this series observed, literacy rates and learning outcomes are some of the lowest in the BIMARU (Bihar, Madhya Pradesh, Rajasthan and Uttar Pradesh) states. By 2020, India will have the world's largest working population--869 million--but an IndiaSpend analysis of these four states--with 43.6% of India's school-age population between the age of five and 14-- revealed that India is unprepared to educate and train its young population.

Bihar is India's third most populous state, with 99 million people; its literacy rate (61.8%) is the country's lowest; and the female literacy rate (51.5%) second lowest, according to Census 2011. Bihar's median age at 20 is India's lowest; the Indian average is 26.6.

Reading levels in Bihar government primary schools declined over five years and improved in private schools, according to the Annual Status of Education Report--Trends Over Time Report (2006-14); not an encouraging sign, since 90% of all Bihar schools are run by the government.

Despite literacy rise, 62% of primary students do not complete secondary education

Nearly 5% of children from Bihar aged six to 14 years are estimated to be out of school, according to this 2015 human resource development ministry education profile. Of those out of school, 55% children were never enrolled and 25% dropped out of school.

Of those in primary school, barely 85% made it to upper primary school in 2014-15, the third lowest proportion in India after Nagaland and Uttar Pradesh, according to Unified-District Information System For Education (U-DISE) data.

No more than 38% students enrolled in grade I complete their secondary education (grade X) in Bihar, according to the Bihar Economic Survey 2015-16.

Why it is difficult to improve student outcomes: Not enough classrooms, teachers

With nearly 28% of its population aged five to 14 (28.9 million), Bihar reported 23.4 million students in elementary school in 2015-16 and 467,877 teachers (even including schools where primary, upper primary and secondary levels co-existed, and teachers on temporary contract), according to government education data.

Bihar has a teacher pupil ratio of 24 in upper primary, higher than the all India ratio of 17, but lower than the prescribed guideline of 35.

Bihar has the lowest per student expenditure on elementary education

Bihar has India's second largest population aged five to 14 (Uttar Pradesh is first), but the government spends little per student.

Bihar recorded India's lowest per student expenditure on elementary education, Rs 5,298 in 2014-15, according to this commentary in the Economic and Political Weekly. The best-performing state (among the 18 surveyed), Himachal Pradesh, spent Rs 39,343 per student in 2014-15--or nearly seven-and-a-half times as much.

Para-teachers in the districts of Nalanda and Purnea, for instance, are paid Rs 6,400-6,800 per month, while regular teachers earn Rs 23,000-28,000, according to this 2013 survey by Accountability Initiative, a think tank based in Delhi.

As a result, Bihar spends a lower proportion of its elementary education budget on teacher salaries, training and inputs than Maharashtra, Andhra Pradesh and Rajasthan, according to this 2014 study, How Much Does India Spend Per Student on Elementary Education, by Accountability Initiative.

By spending a lower proportion of the elementary education budget on teachers, Bihar spends more money on other things such as midday meals and providing incentives to attract children to schools--such as free textbooks and uniforms--bringing back out-of-school children into formal education, according to the Accountability Initiative study.

Still, the capital expenditure--money spent on new schools and classrooms--has been meagre and fluctuates every year. In 2015-2016, Bihar allocated 5.75% of its total education budget on school infrastructure--inadequate in a state that has an average of 51 students in a classroom.

This is the second of a five-part IndiaSpend series that looks at progress in education in the states of Bihar, Madhya Pradesh, Rajasthan, and Uttar Pradesh. You can read the first part here, the third part here, the fourth part here and the fifth part here.