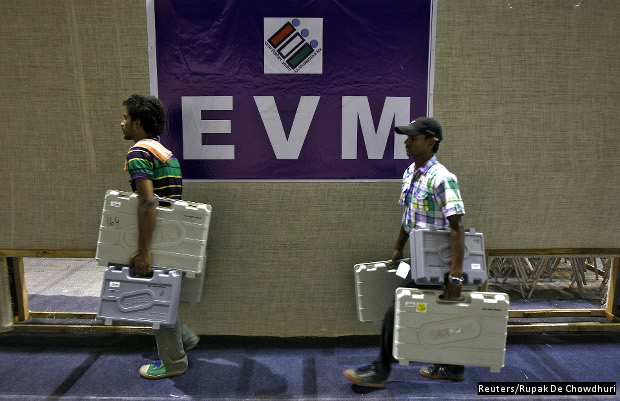 Exit polls at the end of the assembly elections in Bihar seem to have gone against the opinion polls during the elections.

The results for the 243-seat assembly will be announced on Sunday, November 8th.

Will the Mahagatbandhan, that got the formerly opposing JD(U), Rashtriya Janata Dal (RJD) and Congress together, win the polls? Or will the BJP-led NDA continue its winning streak?

All but one exit poll shows an intensely close-cornered fight between the two alliances.

Today's Chanakya survey shows a sweeping majority for the NDA.

While a couple of agencies give a thin lead to the Grand Alliance, most of them agree that the two fronts are equally probable to come to power.

The opinion polls by various agencies, as we saw in an earlier IndiaSpend analysis, had given mixed numbers for both the alliances. BJP, however, had a lead in most of them.

Exit polls by some agencies, however, are showing a swing away from the opinion surveys in favour of the Mahagatbandhan.

Exit polls of three agencies - C-Voter, Nielsen and Cicero - have increased the tally of seats for the Grand Alliance from opinion polls conducted earlier.

Analysts debating the exit polls have identified four factors that may have led to BJP’s decline and the Mahagatbandhan’s rise in numbers from the pre-poll opinion surveys to the exit polls.

Questions raised on the reservation policy by Rashtriya Swayam Sevak (RSS) chief Mohan Bhawagat seems to have gone in favour of the main Mahagatbandhan constituents JD (U) and RJD.

Sons-of-the-Soil identity factor in Nitish’s slogan seems to have worked. Top BJP leadership during the campaign was not Bihari. They were relying on the Modi charisma, and their opponents have used it against them in slogans.

Growing communal disharmony, beef ban and violence seem to be affecting the popularity of the ruling party (BJP) at the centre. These issues were also raised during the Bihar campaign. This affected polarisation on communal lines.

Rising price of tur dal (pigeon pea) also seems to have acted on voter sentiment. While it cannot entirely be a deciding factor in an election, it is giving the common man a perception of rising prices and affecting the ruling government.

(Tewari and Waghmare are analysts with IndiaSpend.)