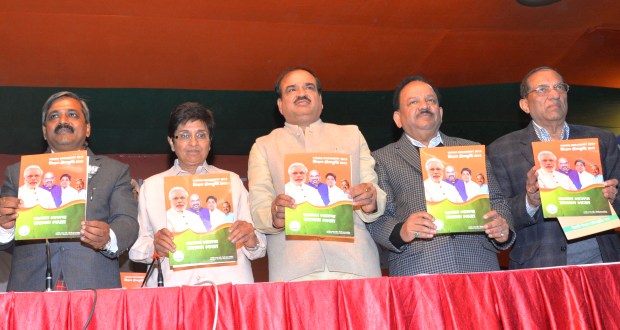 For all the sound and fury exchanged by the three principal parties in the electoral battle to control Delhi, the promises they are making to the capital's 16.8 million people are largely similar.

While development debates for most other states account for rural-urban divides and "vote banks" (voting targeted at religious and caste groups), Delhi, one of India's largest, most prosperous and unequal urban agglomerations, skips those issues.

"Development” for Delhi is not GDP growth but management of urban life.

This is particularly important because a good urban-development policy for Delhi can become a blueprint for other Indian cities. The effect of the Delhi Metro is one example, as IndiaSpend has previously reported.

The INC is putting forth its 15-year record in power, claiming to have "made" Delhi. The BJP has focussed on the central government's achievements while making its promises for the capital, and the AAP, which formed the government after the 2013 elections, has stuck to the promises it made last time.

Let us compare some key issues in the manifestos of these three major parties:

-Increase in the number of power distribution companies from the current three.

- People using above 200 units of power will be given 50% discount.

-Significant reduction in bills through increase in the number of power distribution companies.

-Discount of 5% on one-time payment of bills.

-All street lights will be power-efficient LEDs

-Subsidised electricity for the poor.

-Electricity bills will be halved.

-Will try to generate at least 20% of its electricity needs through solar power.

-Bi-monthly billing of water for households

-Construction of Renuka Dam in Himachal and Munal canal in Haryana.

-Water as a right.

-700 litres of free water every day per household.

- A network of water kiosks in slums for safe drinking water.

-Discharge of untreated water into the Yamuna will be prohibited.

-Right to housing to be passed.

- Regularisation of unauthorised colonies within a year.

-Affordable housing not just for rehabilitation of slum dwellers now but for the future as well.

-Roads, toilets and water to be provided until slum-rehabilitation begins.

-24 hour diagnostic centres with CT scan, MRI and ultrasound in every hospital.

-Regional forensic labs to be set up

-Children under 14 will be covered under Chacha Nehru Sehatyojana scheme, a health programme expected to cover all school-going children

-Compulsory health insurance for everyone

-15 bed hospitals and ambulances every 5 km.

- Health cards for everyone in Delhi to ensure long-term health services.

-Emergency beds and services to be expanded from 10% to 40%

- Professional evening colleges to be set up in government schools. 85% seats to be reserved for Delhi students.

-An innovation council to be set up

-Vacant teacher and other posts to be filled in Universities, schools and colleges.

-85% of college seats to Delhi students.

-Garhwali-Kumaoni academy to be set up.

-National medical college in Delhi with 250 seats to opened up.

-Madrassa modernisation programme to be set up

-Will bring transparency into KG and nursery admissions.

-Severe punishment for crimes against women

-Special training for police forces to deal with crimes against women.

Self-defense as a part of school curriculum.

-Every district to have fast-track courts.

-CCTV in public transport and other crowded areas.

-CCTV in all public spaces.

-Suraksha (safety) buttons on every mobile, so that family and the police can be alerted in case of emergencies.

The urban agenda of all parties is clear, with concrete plans on electricity, water and housing. While electrification is not a concern for the Delhi state government, meeting demand and controlling prices is a big challenge.

As far as water supply and sanitation is concerned, census 2011 data reveals that 10% of households in NCT of Delhi are without toilets and 19% of households do not have access to tap water.