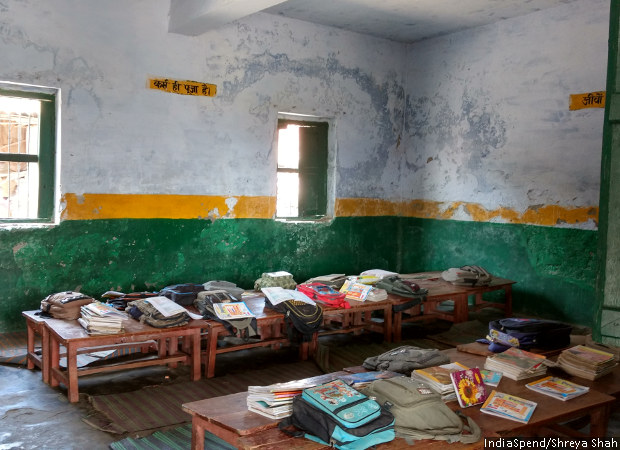 On The Day Of The Survey

These are the findings of the 2016 Annual States of Education Report (ASER) survey, a household survey of schooling and learning levels in rural India. The survey included over 560,000 children between three and 16 years, in 589 districts of India.

India’s almost universal enrollment in school hides these two major challenges of school education--high dropout and low school attendance. Children dropping out or not attending school, has consequences: It results in loss in productivity of the education system as a high dropout rate increases per unit cost of school education, and reduces human resource development. Dropouts are likely to be in semi-skilled and unskilled employment, according to a 2011 study by the National University of Educational Planning and Administration .

In the policy context, for the present government’s “Skill India” and “Make in India” programmes to see even a modicum of success, it would have to address these two issues related to school education.

Why do children skip school or drop out?

Enrollment in school in India does not necessarily translate into attendance. At the all-India level, only about three-fourths of enrolled children attended primary (grade I to grade IV/V) or upper primary school (grade V to grade VII/VIII) on the day an ASER team visited the school in 2016.

The problem of students dropping out, and absenteeism, is particularly acute in BIMARU states—an acronym for the less-developed states of Bihar, Rajasthan, Uttar Pradesh (UP) and Madhya Pradesh (MP)—that together have over 51 million children, or 46% of India’s total child population between the ages of 11 and 16 years, according to Census data. Within BIMARU states, this story also considers, Uttarakhand, Chhatisgarh, and Jharkhand states carved out of Uttar Pradesh, Madhya Pradesh and Bihar respectively.

Though the reason cited for dropouts in secondary schools is often access (such as “school is far”, especially, for girls), evidence shows that one of the most important reasons for dropping out is “lack of interest”, according to the ASER Centre’s Middle School Study, conducted in Nalanda district in Bihar and Satara in Maharashtra, between 2013 and 2015.

The three-year study tracked the educational trajectory of about 6,000 children after primary school.

A higher proportion of children in the age group 11-16 years who dropped out of school between 2015 and 2016 lacked basic reading and arithmetic skills, as compared to children who continued to be enrolled in school in 2016.

It is possible that many students’ knowledge level is much below grade level, but that teachers teach students only at grade level, as one study from 2017 suggests. If children are being left behind in school and if no one in school engages with them at their level of knowledge, they might dropout of school.

Though data on absenteeism are difficult to collect, and the relationship between learning and absenteeism is not verified empirically, it is reasonable to expect that those who attend school regularly have better learning outcomes than their peers who do not.

Dropouts are a bigger problem than children who never enroll in school. While 1.1% of children between the ages of 11 and 14 years never enrolled in school, 3.5% were dropouts, the ASER 2016 survey found.

Dropouts In MP & Chhattisgarh Increased In 2016

years--children who would have been in secondary school (grades IX and X).

Across India, Madhya Pradesh had the highest proportion of children in ages 15-16 years (23.6%), who were dropouts.

Gujarat, an economically advanced state when compared to the BIMARU states, has the second highest proportion of dropouts in India—19.3%--for reasons that are unclear at this point.

The proportion of dropouts in MP, on the other hand, has steadily increased from 11.6% in 2010 to 23.6% in 2016. Reasons behind the varying trends are difficult to understand, and we need further studies to understand the pattern of dropouts across states.

In some states, girls more likely than boys to drop out of school

In other BIMARU states--Bihar, Jharkhand, Chhattisgarh and Uttarakhand--boys in the age group 15-16 years were more likely to drop out of school than girls. The reasons for differential gender trends across states is not clear and needs further research.

(Deshpande is a research associate, and Banerji is a senior researcher with ASER Centre.)