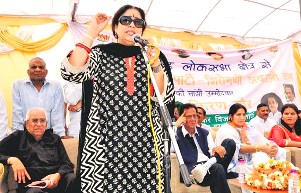 With the new Lok Sabha to be in place soon, it would be interesting to look at women representation in Parliament. Sadly, there is little change in the number of women winning candidates. As against 59 women MPs in the last Lok Sabha, the 2014 Lok Sabha elections have seen only 60 women candidates win the polls.

The interesting change is in states like West Bengal where the number of women winning has doubled, now representing 14 of 42 candidates from the state. And, of course, if you were to go party-wise, BJP has doubled its tally of winning women MPs.

First a backgrounder: out of 8,136 candidates who contested the 2014 Lok Sabha elections, 7.8% (636) were women, which is an increase over the 2009 general election figure of 6.9% (556 women candidates out of a total 8,070 candidates). The table below shows the number of winning female candidates for different states in India.

The table above is illustrative of the low representation of female candidates elected in the country. However, the 16th Lok Sabha will see the highest number of female MPs since the 1957 general elections, which saw only 27 women MPs being elected. The winning percentage of women has actually in this general election to 9.4% while it was 10.1% during the 2009 elections.

Among states, West Bengal has done very well with 14 women MPs, which is double of the 2009 tally followed by UP with 13 seats, which does not show any change since 2009. West Bengal’s winners include actor Moon Moon Sen from Bankura who got 4.8 lakhs votes. Other prominent names include actress Kirron Kher from Chandigarh with 1.9 lakh votes and Hema Malini from Mathura with 5.7 lakh votes.

BJP has done well when it comes to women candidates. It has also improved its performance with 28 MPs as against 14 MPs after the 2009 elections. TMC has also seen a good increase over its past performance from 4 to 18 in the 2014 elections. Congress, on the other hand, has seen a fall from 23 in 2009 to only 3 in 2014.

We can also see that when it comes to comparison with male MPs, TMC scores better with 39% of its candidate being females. However, when it comes to the major parties, one can see that women representation is quite low; for BJP, it is only 11%.

So, even in these elections where women were supposedly asked to rally around ‘the power of 49’, the performance of women candidates is more or less dismal. It’s a matter of investigation as why more women candidates do not get elected.