Mumbai: Heart disease is the highest killer among Indians but the risk of heart disease varies across states, with wealthier and more urbanised states having higher risk, according to a new study.

The 10-year risk for cardiovascular disease (CVD) occurrence ranges from 13.2% in Jharkhand to 19.5% in Kerala, according to a study by the Public Health Foundation of India (PHFI), an advocacy, and the Harvard T.H. Chan School of Public Health, published in PLOS Medicine, a medical journal, in June 2018.

The risk was higher in northern, north-eastern and southern states. It was also higher for those living in urban areas and belonging to wealthier and more educated families.

The PHFI study pooled data of 797,540 people aged 30-74 years from two large household surveys in India, the District Level Household Survey–4 (DLHS-4) and the second update of the Annual Health Survey (AHS) conducted between 2012 and 2014.

The researchers calculated the cardiovascular risk based on factors such as body mass index (BMI), systolic blood pressure and blood sugar level and how it varies among states by rural-urban location and socio-demographic characteristics.

Among both males and females, CVD risk tended to be the highest in south India (including Goa), the three most northern states in the dataset (Himachal Pradesh, Punjab, and Uttarakhand), the north-eastern states (except Assam), and West Bengal (particularly among males).

Men had double the cardiovascular risk of women

In rural areas, living in the wealthiest 20% districts was associated with a relative increase in the 10-year cardiac risk by 13.1% compared to the poorest 20% districts. In urban areas, the corresponding increase was 4.3%. 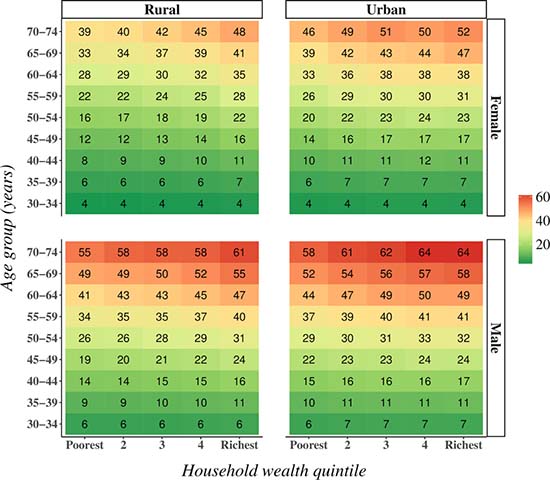 In risk factors, while mean BMI was substantially higher among wealthy individuals, high blood glucose and high systolic blood pressure were common among poor individuals in middle and old age. Smoking was most prevalent among men in poorer wealth quintiles and in rural areas.

State-wise information on CVD risk is “essential for effective targeting of resources and interventions for prevention, screening, and treatment”, the authors said.

“Given the size and projected growth of India’s population, the determination and effectiveness of the country’s measures to prevent and treat CVD over the coming years will have an important bearing on the achievement of the SDGs [sustainable development goals] at the global level,” the study said. SDGs are global targets put forward by the United Nations and agreed upon by all nations, including ensuring healthy lives and promoting well being at all ages, and reduce by one-third premature mortality due to non-communicable diseases by 2030.

“It [study] also highlights the urgent need for population-wide interventions such as the elimination of artificial trans-fat, sodium reduction as well as reducing tobacco use,” Lindsay Jaacks, faculty at the Harvard T.H. Chan School of Public Health and visiting faculty at PHFI, said in a statement.