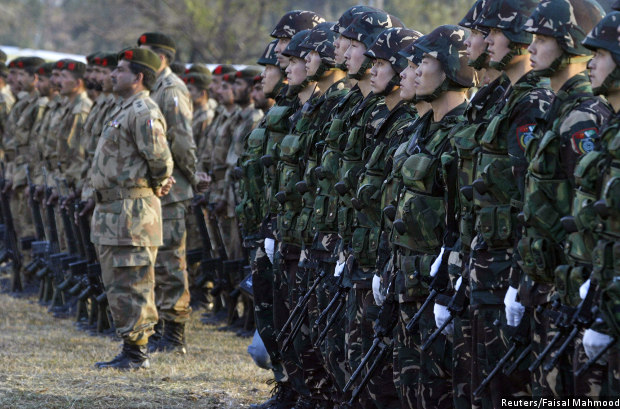 China's People's Liberation Army troops (right) and Pakistani troops attend a flag hoisting ceremony at the start of joint military exercises in Abbotabad, 85 km (53 miles) northwest of Islamabad, in December 2006. China’s rise to becoming the world’s third-largest arms exporter was to a large degree helped by heightened demand from Pakistan, which now buys 35% of these exports and is Beijing’s biggest buyer.

Until five years ago, the USA and China shared an almost equal proportion of Pakistan’s arms imports: 39% and 38% respectively. Today, China supplies 63% of Pakistan’s armaments, with the USA dropping to 19% and second place, an IndiaSpend analysis reveals, as Pakistan mulls a response to India's strike on terror camps across the border.

China’s rise to becoming the world’s third-largest arms exporter was to a large degree helped by heightened demand from Pakistan, which now buys 35% of these exports and is Beijing's biggest buyer (Bangladesh follows at 20%), according to this February 2016 report from the Stockholm International Peace Research Institute (SIPRI).

The military supplies are bolstered by unwavering support at a time of heightened tension with India and faltering ties with the US (there was a 73% drop in US security aid over four years to 2015, The Wire reported in August 2016; the US also cancelled the subsidised sale of eight F-16 fighter jets).

The submarines could have a nuclear strategic capability--they could be used to launch nuclear-tipped land attack cruise missiles, providing Pakistan with a partial second-strike capability to rival India's nuclear-submarine ballistic missiles.

The submarines are the latest of several big ticket arms purchases by Pakistan. Others:

The period coincides with China’s emergence as a major global power, seeking to challenge US hegemony across various areas and with enough heft to keep India unbalanced, either directly or through Pakistan.