Behind Karnataka's Anger: Rainfall Deficits In 90% Of State 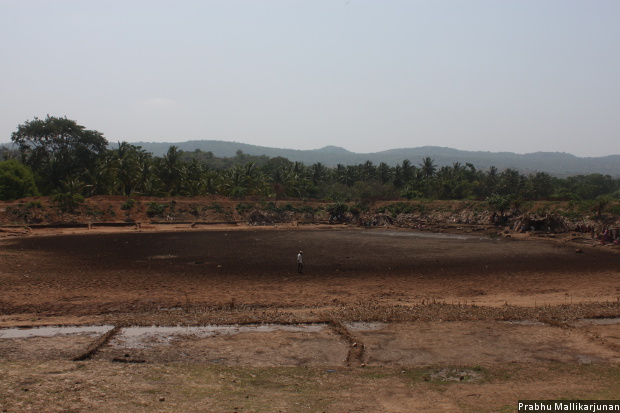 A dried up lake in Dadiganadoddi village, bordering Karnataka and Tamil Nadu, near Biligundlu--where Cauvery water is to be officially handed over to Tamil Nadu. Protests erupted in parts of the Mysore-Mandya region on September 6, 2016, following the Supreme Court order and the government’s decision to release water to Tamil Nadu.

Karnataka's angst and anger--a statewide bandh, or shutdown, is in force today--over a Supreme Court (SC) order to release water of the Cauvery river to neighbour Tamil Nadu is rooted in the failure of the monsoon in the state, a hidden variation of India's statistically normal monsoon.

Reservoirs in the Cauvery catchment are half as full as they should be, 42% of minor irrigation tanks are dry statewide and 90% of Karnataka's talukas--subdivisions of districts--recorded deficit rainfall in August. The water in Karnataka's reservoirs must now be shared between farmers in Karnataka and Tamil Nadu and meet Karnataka's own drinking water needs.

Overall, the state was 16% short of normal rainfall between June 1, 2016, and September 5, 2016, according to data from the Karnataka State Natural Disaster Monitoring Centre (KSNDMC).

The meteorological department classifies this as a "normal" deficit, but rainfall was intermittent and uncertain through the monsoons.

After two consecutive droughts, India received normal rainfall—2% less than the 100-year average—by the end of August 2016, but within that normality, more than a third of the country is short of rain, according to India Meteorological Department (IMD) data, IndiaSpend reported in August 2016.

Protests erupted in parts of Mysore-Mandya region on September 6, 2016, following the SC order and the government's decision to release water to TN. The government has sought a modification of the SC order.

Karnataka 39% short of rainfall in August

In August, Karnataka's four zones--south and north interior, the southern Malnad region and the coast--recorded a 39% deficit in rainfall.

The Malnad region, which is critical for the Cauvery's catchment area, received 977 mm in August, against the normal 1369 mm, a 29% deficit. 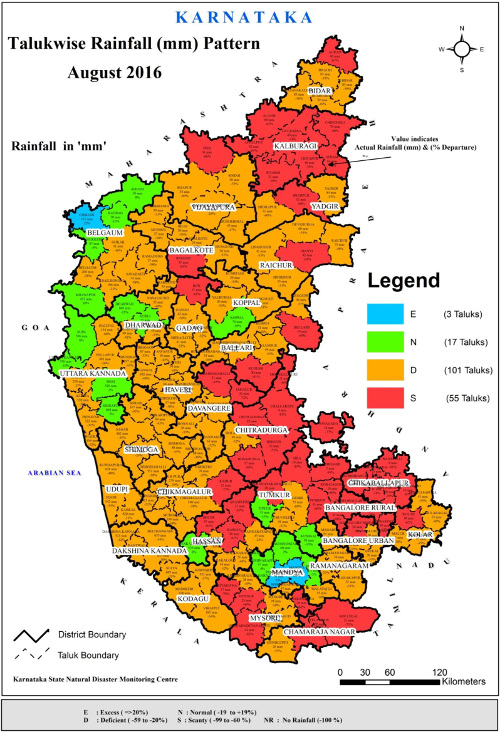 The August rains are critical to the sowing of important crops, such as paddy, ragi, maize and sugarcane. With no more than four weeks left for the end of southwest monsoon, farmers are struggling.

Water levels of reservoirs in the Cauvery catchment area, including the Krishna Raja Sagara (KRS) dam in Mandya district, Kabini in Mysore, Harangi in Kodagu and Hemavathi in Hassan were less than normal (based on a 15-year average) and less than the levels in 2015, according to KSNDMC data on September 3.

Of 3,598 minor irrigation tanks in the state, 42% are dry and no more than 12% of tanks are more than half full, according to KSNDMC data.

The water level at KRS on September 3 was 17.96 tmcft (thousand million cubic feet), against its capacity of 49.45 tmcft, lower than last year's level over the same period (25.30 tmcft). KRS is normally full by this time.

The SC’s order to release 15,000 cu secs to Tamil Nadu over 10 days would mean the state has to release 13.6 tmcft of water, 24% of the water now available in Cauvery basin reservoirs.

This could worsen Karnataka's drinking water situation in the state in the coming days. Farmers representatives argued that their livelihoods are at stake if Karnataka releases more water.

"We (farmers) have reduced sugarcane cultivation in 70% of the area as it is water-intensive and have opted for paddy cultivation," Karnataka Rajya Raitha Sangha (Karnataka state farmers' association) leader and member of legislative assembly (MLA) KS Puttannaiah told 101reporters.com. "If the government cannot release water even for this, what will the farmers of this region do for a living?"

“For decades, the two state governments are fighting for water based on the rains that are unpredictable. They should find a permanent solution to the problem and consult farmer leaders before taking any decision."

Sowing less than a quarter of normal in the Cauvery heartland

In Mandya, where protests against the SC order are intense, sowing has been less than 25% of normal as on August 22, 2016, according to Karnataka agriculture department data.

“With deficit rainfall across the state in August, there will be a reduction in proportionate yield and overall production," said H. Shivanna, Vice Chancellor, University Of Agricultural Sciences, Bengaluru. "In the Cauvery basin, they are transplanting paddy (into fields) now, as it requires lesser water than sugarcane. Sowing is already delayed, and if it does not rain for another 10 days, farmers in the state will be severely hit."