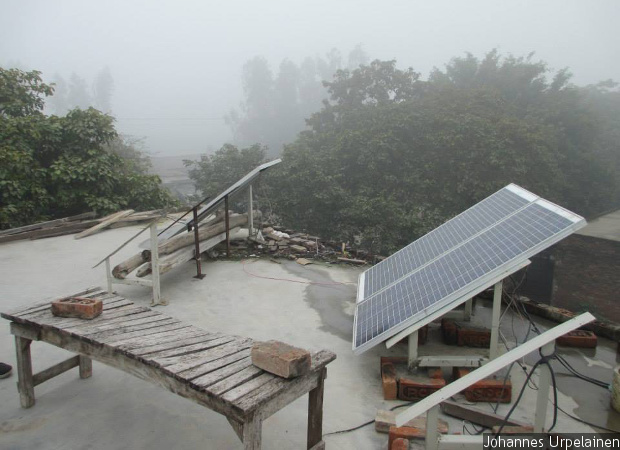 A solar panel installed atop a house in Barbanki district, Uttar Pradesh. Installing a solar lighting system had little effect on the household patterns of time spent on work, studying using the light, expenditures, savings or business ownership, a new study found.

Decentralised solar power, when utilised by unelectrified households, reduces money spent on kerosene but is not conducive to accessing larger social and economic benefits, a study published in Science Advances, an online publication under Science magazine, on May 17, 2017 found.

The study was conducted over a year in 1,281 households from 81 non-electrified rural communities in Suratganj block of Barabanki district, Uttar Pradesh, about 75 kms away from the state capital of Lucknow.

While half of the population was selected randomly and put into a 'treatment' group, which was offered cost-effective solar microgrids by solar service provider Mera Gao Power, the other half, the 'control' group, was not given power.

The researchers observed over the period of the study that basic energy access through the micro-grid did not appear to provide broader socio-economic benefits. Installing a solar lighting system had little effect on the household patterns of time spent on work, studying using the light, expenditures, savings or business ownership.

However, after comparing the treatment and control groups, the study found that electrification rates (percentage of households with access to electricity) in the former increased by 29-36%.

"We worked in very small and marginalised communities, even by UP standards," Michaël Aklin, one of the authors of the paper, told IndiaSpend over email.

"For instance, other communities might differ considerably in terms of how wealthy they are or how close they are to the grid. Similarly, if we think about other countries, we would also need to think about the price of kerosene. The impact of these microgrids could be larger in places in which kerosene is more expensive (which would be the case, for instance, in places without government subsidies)."

Around 90 million households in India still use kerosene for cooking and lighting requirements, according to estimates by the ministry of new and renewable energy (MNRE). Companies like Mera Gao Power that build small energy grids that power a few households or a village, have the potential to reach 73 million unelectrified households in India that still use kerosene as their primary source of electricity–a polluting source of energy that produces earth-warming carbon dioxide, in addition to emitting gases such as carbon monoxide, nitrogen oxides, and particulate matter, with severe health consequences, as IndiaSpend reported on January 7, 2017.

An estimated 1.16 billion people (17% of the world's population) did not have access to electricity in 2015; an estimated 615 million of them in Asia and the majority of those in India (306 million), according to this 2015 working paper by the International Renewable Energy Agency (IRENA), an inter-governmental organisation that supports transitions to sustainable energy.

The Indian government, under its Power For All initiative launched in 2014, aims to provide 24x7 power to all its citizens by 2019.

For people without access to electricity, off-grid renewable systems, which are cheaper than extending the national grid, are the most economical way to get electricity, according to this paper by IRENA.

India aims to add 2,000 MW off-grid solar applications by 2022 under the JNNSM. This is a part of India's larger target to install 175 GW (1 GW is 1000 MW) of renewable generating capacity by 2022, under its commitment to the 2015 Paris Agreement to combat global warming. Off-grid installations will make up a very miniscule part of this target, as IndiaSpend earlier reported.

Between 2013-17, the mission is expected to deploy around one million solar lighting systems. By March 2017, the government had installed 462.54 MW of solar photovoltaic systems under off-grid applications, according to this update by the MNRE.

While the government has provided these decentralised power systems for rural electrification since 2001, the sector has seen a surge of private companies recently, according to this paper by the Global Network on Energy for Sustainable Development (GNESD), a knowledge network facilitated by the United Nations Environment Programme.

"The households could use electricity only at night, beginning at sunset and ending by 11 pm," Aklin said. "The main problem is not the number of hours but the amount of power available. The micro-grids we studied only gave people access to mobile charging and two LED lights." 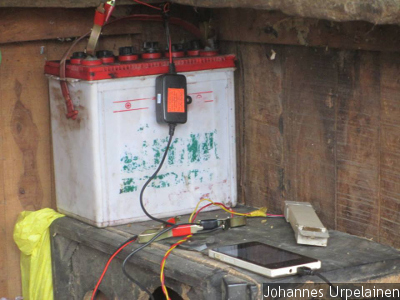 "We worked in very small and marginalised communities, even by UP standards," Michaël Aklin, one of the authors of the paper, told IndiaSpend. "The main problem is not the number of hours but the amount of power available. The micro-grids we studied only gave people access to mobile charging and two LED lights."

"Larger systems that can power appliances and machinery would have more substantial impacts but the capital cost would be higher. The challenges here concern the cost of these systems and the relative poverty of the potential customers. Public policy could be particularly useful here to help customers borrow money to buy (or rent) more powerful off-grid technologies," Aklin added.

The poorest of the poor often pay the highest rates for basic electricity services, and regulation of off-grid markets is needed, according to this 2015 paper by the World Resources Institute (WRI), a global research organisation. It also said that erratic supply offsets the full economic benefits of electrification programmes.

Electricity access is multidimensional, but not treated that way

Access to electricity is not binary and cannot be answered with just a yes or no. Communities' experience of electricity is shaped by attributes such as reliability, affordability, and capacity for powering different services, according to the WRI paper.

As of May 16, 2017, 73% of India's villages were electrified but only 8% of villages had all its households electrified, according to data published by the ministry of power. However, this provides no information about the quality of power provided.