Average Indian Consumes 119% More Salt Per Day Than WHO Limit 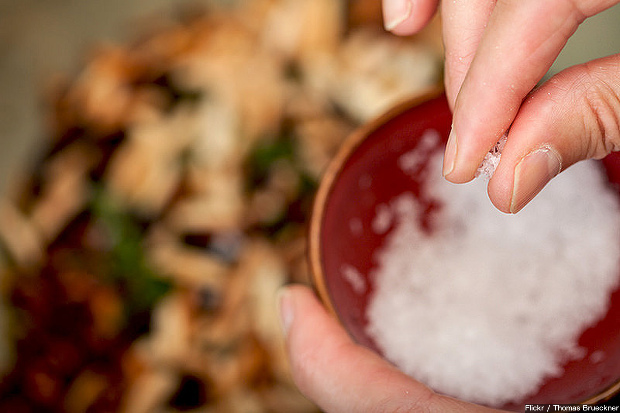 An average Indian consumes 10.98 grams of salt per day--119% more than the recommended limit of five grams per day by the World Health Organization (WHO)--according to an IndiaSpend analysis of a study conducted by the Australia-based George Institute of Global Health (GIGH), published in the Journal of Hypertension. Intake of excess salt can lead to high blood pressure--a leading cause of cardiovascular diseases (CVDs), which accounted for 23% of all deaths in India between 2010 and 2013.

The study analysed the salt intake of 227,214 Indian adults--aged 19 years and older--across 29 states and seven union territories; the reported mean salt consumption levels varied between 5.22 and 42.30 grams per day.

The primary data were obtained from various studies conducted between 1986 and 2015--till November 2015--that reported mean or median dietary salt intake in Indians.

As many as 21 different studies were considered for the final analysis which included 24-hour urine collection reports, 24-hour dietary recall surveys and food questionnaire surveys.

The WHO believes that high sodium consumption (>2 grams per day, equivalent to 5 grams salt per day) and insufficient potassium intake (less than 3.5 grams per day) contribute to high blood pressure and increase the risk of heart disease and stroke.

There was wide variance in consumption among different regions and states.

In urban areas, Uttar Pradesh, Uttarakhand, Punjab, Maharashtra and Gujarat reported least consumption among all states--6-7 grams per day; in rural areas, Haryana and all the above mentioned states--except Maharashtra--reported the least consumption. 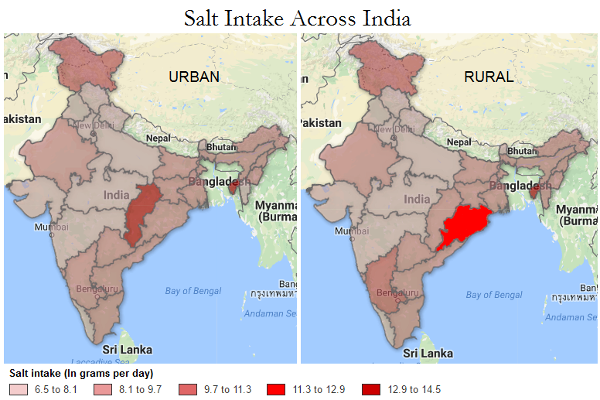 Source: Study by Australia-based George Institute of Global Health, published in the Journal of Hypertension

Tripura reported the maximum consumption of salt across all states--13.14 grams per day in both rural as well as urban areas.

“Over the past 30 years, the average Indian diet has been transformed. Indians are eating less of pulses, fruits and vegetables, and a lot more of processed and fast foods,” according to Claire Johnson, lead author of the study. “Thus, their diets are now full of salt, sugars and harmful fats which are increasing the likelihood of high blood pressure, obesity and CVDs such as heart attack and stroke.”

Heart disease continues to the highest cause of death in India, followed by chronic obstructive pulmonary disease, IndiaSpend reported in October 2016.

The GIGH study highlighted the fact that prior studies have reported higher levels of salt intake in men than women and in urban compared with rural areas.

The Census report said that more men die due to CVDs than women in rural as well as urban areas, correlating with the observation made by the GIGH study. Men are 1.5 times more likely to suffer from a heart attack than women, IndiaSpend reported in June 2015.

Increasing consumption of processed foods is likely to be pushing up mean salt intake, particularly in urban areas, whereas widespread use of salted pickles in rural areas may account for relatively high consumption levels in rural regions, the study said.

CVDs are more expensive to treat, and cause economic burden to families. Households in India affected by cardiovascular disease spent 27% of their total household budget on out-of-pocket healthcare expenses, and hospital admissions from households that had a family member with heart disease cost 4.5 times more each year than admissions from families that had no heart disease, according to an April 2014 study published in Tropical Medicine and International Health.

Member states of the WHO, including India, have adopted a target of 30% reduction in mean population salt consumption by 2025 to prevent non-communicable diseases.

“We need a country-wide educational programme, teaching people about how to eat and how to reduce the salt in their diet,” according to Professor Vivek Jha, executive director of GIGH, India. “It can be done but it needs investment and it needs to be made a priority, given our rapidly rising levels of CVDs and high blood pressure.”

The GIGH is designing a “National Salt Reduction Program for India” tailored to the specific social and economic circumstances of India in collaboration with the Centre for Chronic Disease Control.

WHO recommendations for salt reduction

The WHO has specific recommendations for reducing salt intake and, eventually, risk of CVD and other diseases: