At Helplines For The Elderly, Distress Calls For Fear Of Dying Alone

Bengaluru: A kilo of rice and half a kilo of dal is all Savitri Bai Padaliya, 61, has had to see her through the ongoing lockdown declared over a month ago to contain the spread of COVID-19. The widow who lost her only child, a son, two years ago, lives alone in Ujjain in western Madhya Pradesh, and survives on a small pension and sporadic earnings from selling fodder for cows in the vicinity of a local temple.

“Everything is closed, so I called a helpline number someone gave me and was given some ration,” she said, referring to the helpline set up by HelpAge India, a non-profit working for the disadvantaged elderly. “But what will I do when this gets over?”

Unlike Padaliya, Shambhu Chopra, 67, a retired lawyer in southern Uttar Pradesh’s Prayagraj city, is not short of money but is still struggling through the long days of physical distancing. He lives alone, does not know how to cook and his domestic help has stopped coming to work. He reached out to people in his network, and also to Caremongers India, a Facebook community of volunteers that responds to distress calls from across the country. A local police station came to his help, offering him two packaged meals a day.

Helplines for the urban elderly such as those run by HelpAge India, and social media support groups such as Caremongers have been receiving an increased number of distress calls after the outbreak of COVID-19, our reporting suggests. There has been a 40-50% increase in the number of calls on helplines for the elderly, said Imtiaz Ahmed, head of the helpline network at HelpAge India. The NGO has a central helpline number connected with support teams in 21 states.

Senior citizens, especially those living on their own, are struggling to deal with daily lives on multiple fronts during the ongoing lockdown, we found in interviews with the elderly persons we connected with through helplines and support groups active in Ujjain (Madhya Pradesh), Prayagraj (Uttar Pradesh), Visakhapatnam (Andhra Pradesh) and Mumbai (Maharashtra).

The problems of elderly callers ranged from the shortage of medicines and physical support to anxiety, fear and anxiousness, we found. There were those with few resources to survive, others who were entirely dependent on domestic help that is no longer available; some were sick or vulnerable to infections and disease, and many complained of loneliness and anxiety. The biggest fear: dying alone with no family or friends around, said volunteers and support staff at helplines.

Those above 60 years of age constitute 8% of India’s population, as per the 2011 Census. A 2016 report by the social statistics division of the Ministry of Statistics and Programme Implementation puts the number of elderly at nearly 104 million, of whom 73 million live in rural areas and 31 million in urban areas. These figures make India a country with the second largest global population of elderly citizens.

The urban elderly who have been reaching out to helplines--mostly from middle- and upper-class homes--have been as badly affected as those in rural areas, said the ground workers we interviewed. “A lot of NGOs and government schemes are targeting migrant workers, rural areas and rural populations but what is hidden is the need of the elderly in cities and metro towns, who have money and financial support, but are alone,” said Ahmed. “To sustain themselves, they need hands and feet on the ground.”

The World Health Organization (WHO) declared COVID-19 a pandemic on March 11, 2020. In India, it has infected 40,263 and killed 1,306, as of May 3, 2020, according to Coronavirus Monitor, a HealthCheck database. Older people are among the most vulnerable populations across the world. In India, 51.2% of deaths due to COVID-19 have been among adults aged 60 years, as per latest data released by the ministry on April 30, 2020.

Anxiety brought on by the fear of infection; guilt, shame and feelings of abandonment during isolation; and uncertainty about the future--the COVID-19 pandemic is reported to have affected the mental health of many, IndiaSpend reported on April 5, 2020. These problems are exacerbated among the elderly, especially those who live alone or in old age homes, another IndiaSpend report said on March 27, 2020.

Other than attending to incoming distress calls, the staff at HelpAge India have also been making outgoing calls to the old and vulnerable who are on their list of beneficiaries.

“Post-lockdown, we started outbound calls to actively get in touch with our existing beneficiaries and the needy,” said Ahmed. “We are making 1,000-1,200 calls per day through 25 helpline units. There is a spike in the number of incoming calls, particularly in cities like Delhi, Bhopal and Mumbai. These are elderly seeking intervention due to the lack of food or medicines, or some other crisis. Their regular support system--cook, house help, caretaker--have gone home and home deliveries are not functioning, leaving them extremely anxious, helpless and concerned.”

The response of HelpAge volunteers and support staff is to try and assist the callers with supplies, information, hospital numbers and at times, connect them with the local police station for help. But the lockdown has made it difficult for the helplines to offer assistance, said representatives of HelpAge India and other nonprofits.

Dignity Foundation, a loneliness mitigation centre for the elderly, which started an outreach programme immediately after the lockdown, has reported an increase in the number of distress calls over the last few weeks. “We operate in six major cities in India and we now receive around 18-20 calls every day compared to the earlier 5-8,” said Brinda Ramesh, in-charge of the Bengaluru chapter of the foundation.

The elderly callers seeking help and assurance are often panicky, lonely and anxious, and Dignity puts them in touch with volunteers for support, she said. “We also involve them in group activities and games using apps like Zoom so that they feel connected and stay engaged,” said Ramesh. 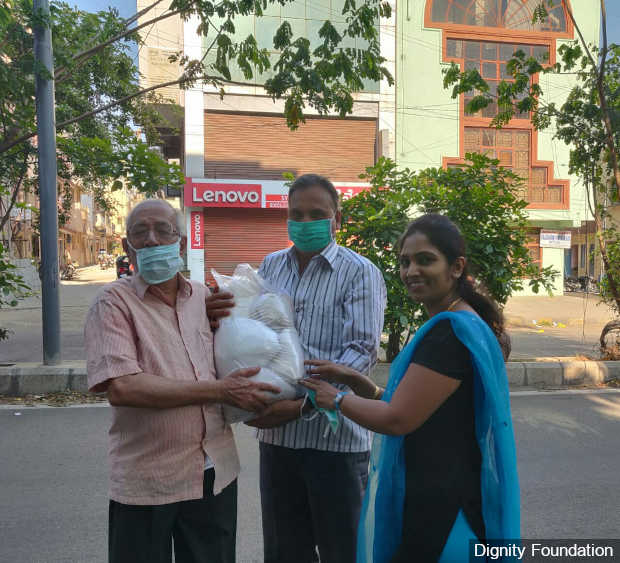 A senior citizen from Bengaluru is helped with dry rations, by a staff member of Dignity Foundation. The nationwide lockdown has curtailed the supply of groceries for many.

Sandhya Honwar, 61, lives alone in Khar West, a Mumbai suburb, and has been on psychiatric medication for many years. On April 7, 2020, she posted an SOS message to Caremongers India, a community of volunteers that responds to distress calls from across the country, seeking help.

“I have been prescribed psychotropic drugs and anti-anxiety pills but the pharmacies around my locality did not have the particular brand my doctor had prescribed, and they refused to provide a substitute generic drug,” she said. “I reduced my dosage to half, but my biggest concern was the withdrawal symptoms I would get once I stop taking the medicine. So, I reached out for help on social media.”

Over the next few days, volunteers from different parts of Mumbai worked to get her the medicines. One of them was Harish Shetty, a psychiatrist who has worked with the victims of disasters and communal riots. The medicine was finally arranged with help from the local police station in Khar West, he said.

“The problem is the restricted availability of psychiatric drugs and lack of clarity on e-prescriptions,” he said. The NITI Aayog recently issued the telemedicine practise guidelines, but it did not mention mental illness; so there is a lack of understanding and confusion among pharmacists on the drugs excluded from the list. “Procuring medicines is one of the main problems for the elderly patients, especially with mental health issues,” Shetty added.

Access to regular medicines for pre-existing health conditions and physiotherapy was the most critical health challenge faced by the 5,000 senior citizens across India who have enrolled as beneficiaries with AgeWell foundation, a charitable foundation.

Around 44% respondents termed this as the most critical health challenge along with 55% elderly asserting that the current lockdown situation is affecting their health adversely, showed an Agewell survey. The participants were elderly with access to mobile phones. AgeWell, which works with the United Nations' economic and social council as a consultative non-governmental organisation to facilitate research and advocacy on elderly rights and care, connects with the elderly through resident welfare associations, old age homes and support networks.

Sudha Rani, 64, has been spending most of her time these days monitoring what her 71-year-old husband watches on television and reads online at their home in Visakhapatnam, the coastal city of Andhra Pradesh. Her frail but otherwise active husband has been getting increasingly anxious and panic-stricken.

“His biggest worry right now is to not fall sick because he has read stories of the elderly not being treated by hospitals overwhelmed with COVID care,” she said. “The fact that he is not able to go for his walks is making him worry more. Earlier he would check his blood sugar and blood pressure once in 10 days, now he wants to do it every second or third day.” She herself feels bogged down by the burden of managing their everyday life and has not slept well for almost a month now, she said. Sudha’s daughter, a Bengaluru resident, reached out for counselling support for her parents on the Karnataka government’s Telegram Channel being run by volunteers and representatives of various government departments.

There are also instances of over-medication rising from anxiety, said Debanjan Banerjee, a geriatric psychiatry expert at the National Institute of Mental Health and Neuro Sciences (NIMHANS) in Bengaluru. “I am witnessing a trend of over-medication and self-medication in patients who are elderly and extremely anxious,” said Bannerjee. “This proved fatal in at least one case where one of my patients succumbed to an unprescribed and unmonitored intake of hydroxychloroquine.”

Disrupted routines, sudden changes in lifestyle, uncertainty and the fear of financial instability can upset anyone, especially the elderly and those with mental health issues, said Shetty, the psychiatrist. “These are testing times for everyone including the mental health providers. We understand and realise the limitations and constraints of telephonic or electronic consultations and counselling.”

Mental health issues do not just plague the elderly who live alone; those living with families too are unable to cope with the impact of the isolation that the lockdown brings. “We are receiving an increased number of calls from the young who are now confined to homes with the elderly and are finding it difficult to deal with them,” said Himanshu Rath, founder chairman of Agewell Foundation. “A common complaint is behavioural change in the elderly with increased levels of irritation and lack of sleep. The old who are living alone have practical problems and those living with families, have psychological issues."

Physical support and some kind of social integration are necessary to help the elderly in this crisis. "The moment you tell a particular group that you are vulnerable and you repeat it as a word of caution excessively, it generates fear, it creates a sense of insecurity,” said Banerjee of NIMHANS.

(Agarwal is a independent journalist.)