Bengaluru: India has now reported more than 1.5 million COVID-19 cases, making it the country with the third-highest number of cases in the world after the US and Brazil. But even as the contagion surges across the country, sanitation workers continue to be inadequately protected, noted a report based on a telephonic survey of 214 sanitation workers in five states and two metros by two independent researchers. It found:

Of the 214 respondents of the survey conducted during April-May, 70% were male and 30% female. While 80 (37.4%) participants were government employees, more than half, 117, had been hired by contractors and 17 (7.9%) were working independently, directly taking up sanitation work in non-governmental spaces.

Sanitation workers and rag-pickers face risk from the handling of unmarked medical waste emerging from homes where COVID-19 patients are quarantined, as IndiaSpend reported on April 9. Sanitation workers--just like doctors, nurses and community health workers--are exposed to the infection, but unlike the medical professionals, they do not know how to take precautions, said experts cited in the report.

One of the changes observed, say sanitation workers surveyed, which included government and contract workers, was that more than 71% had started receiving their full salary on time during the COVID-19 crisis. “We find this a long-due step in the right direction and an indicator that the value of sanitation service has increased since the onset of the pandemic,” said Sheeva Dubey, one of the authors of the report.

Those directly employed saw a reduction or delay in incomes, or stoppage of income altogether. Only three of 17 (18%) directly employed (not contractual or government) sanitation workers reported no impact on income, said the report.

“Although there is some assurance that the salary will come, there have been delays in rural parts,” said K.B. Obalesh, state convenor, Safai Karamchari Kavalu Samithi in Bengaluru. In Karnataka, manual scavengers who clean septic tanks or sewer lines work directly at homes, but sanitation workers employed as sweepers are paid by urban local bodies since they are permanent workers, he added. [Editor’s note: No south Indian state was surveyed in the report.]

Of those surveyed, 92.5% did not have the tools needed to do the cleaning work and 89.9% workers did not get uniforms for work, said the report, adding that 90% of workers said they did not have any kind of health insurance or healthcare facility.

At least 23 sanitation workers in Bengaluru had tested positive for COVID-19. A 28-year-old sanitation worker in Bengaluru died on July 16 after testing positive for coronavirus and her trade union has alleged negligence in her treatment. Sanitation workers in the city decided to go on an indefinite protest from July 21 due to the failure of the municipal corporation to ensure PPE kits, drinking water and sanitisation of work equipment. “The protest is continuing in different parts of the city,” Nirmala M., president of the Bruhat Bengaluru Mahanagara Palike Pourakarmika union [municipal corporation sanitation workers’ union], All India Central Council of Trade Unions, told IndiaSpend on July 29.

BBMP Powrakarmikara Sangha is having an indefinite struggle from today for safe working conditions for powrakarmikas, by wearing black-band during their service and sitting in protest twice a day at their mustering centres, i.e., at 6.30 AM and 11.30 AM. @BBMPCOMM, @BBMP_MAYOR pic.twitter.com/YWeQsjbdy1

Workers are not getting quality safety equipment like gloves, masks, gumboots, caps, and have not been given the required information to handle the disease despite the Karnataka High Court instructing the government to ensure safety of sanitation workers, said Obalesh.

“We must understand that the challenges of sanitation workers are not just occupational,” said Dubey. “The scheduled castes engaged in sanitation work today are the same communities that have been exploited and forced to do manual scavenging since ages.” 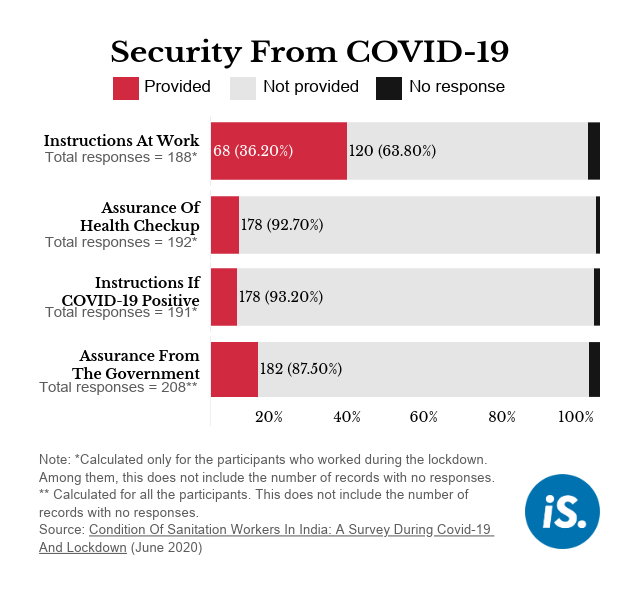 Nearly 97% of women workers said no special arrangement was made for them at work. Only one woman participant said she was getting paid leave during the lockdown; another said her employer was making concessions at work for pregnant workers.

In Mumbai, four workers said there was “no safe space for sanitation workers, especially women workers, to change and wash before and after work”. This exposes not only the workers’ family members but also the public to the risk of infection.

Contract workers are worse off than government workers during COVID-19 despite workers overall saying that payment of salaries is more regular than before, the survey found.

The survey found that “workers hired by contractors or private entities were more disadvantaged than government employees in all aspects”, said Dhamma Nigam, co-author of the report. Of the 214 participants, 117 (54.7%), as we said, were hired on contract while around one-third reported directly being employed by the government.

Nine in 10 workers, both government and contract, were not assured health checkups, and 93.1% contractual employees as well as 93.5% government employees did not get any instructions for their well-being in case they caught COVID-19 during work, the survey found.

Although the government announced Rs-50-lakh insurance cover for health workers, “the Centre has not included sanitation workers [in the scheme] which shows the [lack of] importance given to them”, said Obalesh.

“Once workers are delinked from the government, the responsibility of ensuring rights and facilities for them also gets transferred to contractors,” said the report, citing that “contractors taking up sanitation projects get away with a lot of violations because they work under barely any supervision”.

“In majority of the cases, the government is not taking responsibility,” Bezwada Wilson, national convener of Safai Karmachari Andolan (sanitation workers movement), told us in an interview in October 2019. “They say that they are not employing the workers directly. The Act [Prohibition of Employment as Manual Scavengers and their Rehabilitation Act, 2013] says that [employing workers for] clearing, carrying, disposing human excreta in any manner by a contractor or anyone is a punishable crime.” 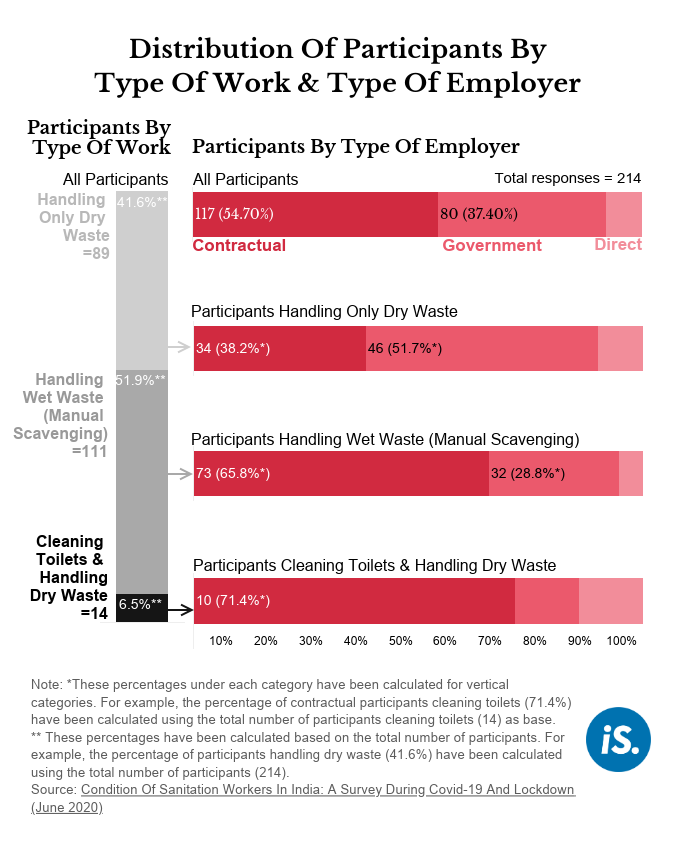 There is more contractualisation of wet-waste cleaning (65.8%) compared to cleaning of dry waste (38.2%). Much of the wet-waste cleaning in Indian cities is still mostly done manually, without the requisite safety and protective equipment, and the pressure on ending manual scavenging has meant that the work has “merely transferred from the government domain to the realm of contractual work”, noted the report.

Although 71% of workers noted an improvement in recovering salary, pre-COVID-19, 83.8% (98 of 117) contractual workers reported that payments were “mostly irregular” compared to the 63.8% (51 of 80) government employees.

“Government workers get a regular income, so they are slightly better placed than contractual workers. Ideally the same payment must be made for the same work,” said Sunil Yadav, a Brihanmumbai Municipal Corporation sanitation worker who is on unpaid leave to complete his PhD at Tata Institute of Social Sciences, adding that contract workers in Mumbai are usually not from the state, and often not paid adequately despite having to do the same work as permanent workers. “They [government] want cheap labour, and that’s why they are not introducing mechanisation or doing any research to improve [the situation],” he said.

In Madhya Pradesh, where nearly 80% of 66 workers surveyed were employed by the government, 30% reported getting salaries regularly before the lockdown, while nearly 85% started getting it regularly since the lockdown started. “This could also be due to an overrepresentation (52 participants) of sanitation workers directly employed by the government,” said the report.

Mega metros not any different

Two metros--Mumbai and Delhi--together account for nearly one in six COVID-19 cases in India, as of July 29.

Thirty-two sanitation workers in Mumbai and 34 in Delhi participated in the survey. Due to the lockdown, the income of three in four surveyed in Delhi was affected and one in three reported not getting any income.

Chief Minister Arvind Kejriwal, on April 1, tweeted about compensation of Rs 1 crore to the family of frontline workers, including sanitation staff, in case of loss of life while serving a COVID-19 patient.

Though schemes have been announced for migrant and unorganised workers, manual scavengers are not considered under the unorganised sector, and COVID-19 has impacted their income, said Obalesh “They [sanitation workers and manual scavengers] should be provided financial assistance and incentives the same way health staff are, and need to be given the requisite health and safety instructions to protect them [from the virus].”

Fifty percent of workers in Delhi, the highest among all the regions, asked for rations--16 or nearly half the workers surveyed in the capital did not have a ration card, which impacted their access to food; one in three said that they were facing financial hardship.

The story was similar in Mumbai. Of the 32 respondents, 11 were women; an equal number (37.5%) of workers were employed as contractual and government workers, and the rest were directly employed. Around 47% reported an impact on incomes during the lockdown with six unable to work and, as a result, not getting any money from their employers during the lockdown.

In the Mumbai Metropolitan Region, 47% were still not getting enough gloves and sanitisers, 16 respondents reported not getting enough masks, and half of them received no safety instructions for work during the pandemic. Nearly nine in 10 did not receive instructions for what to do if tested COVID-19 positive, and three in four received no assurance from the government.

Before COVID-19, sanitation workers--who often live outside or on the outskirts of the city--used to travel by train to their work sites, but now they have become dependent on local buses which are less frequent, said Yadav. “Trains are not working and workers have been told to ensure [daily] attendance. There are no facilities [arranged] for it,” said Yadav, citing that this increases workers’ travel time and the time at work, increasing potential exposure to the viral infection.

Mumbai’s local trains carry over 8 million passengers daily and, per day, on average, Brihanmumbai Electric Supply and Transport Undertaking (BEST) operates 2,865 buses carrying 2.2 million passengers, IndiaSpend reported on June 9. By May 25, as many as 200 BEST employees--70% of them from the transport division such as drivers and conductors--had tested positive for COVID-19 and half of them had recovered, the report mentioned.