Bengaluru: In the wake of the fire and resulting ecological catastrophe at the Baghjan oilfield in Assam, the Wildlife Institute of India (WII) called for a reassessment of the environmental clearance granted to Oil India Limited (OIL) in April 2020 for drilling 18 wells and laying gas pipelines in this area, a report obtained under a Right to Information (RTI) request shows.

WII is an autonomous body under the Ministry of Environment, Forest and Climate Change (MoEF&CC).

The WII report, finalised in mid-July, is part of an assessment mandated by the National Green Tribunal (NGT) following the blowout of one of OIL’s wells in Baghjan, in Assam’s Tinsukia district, on May 27, which went on to catch fire on June 9. The fire was controlled on September 13. A “blowout” is an uncontrolled release of oil and/or gas caused by failures in pressure control systems.

The report highlights two major shortcomings of companies operating oil and gas wells in Assam: poor management of oil spills from wells, and poor emergency response readiness and effectiveness with respect to major accidents. It also criticises OIL for having no restorative process in place for remediation of the impacts of oil spills into terrestrial and aquatic systems, thereby leaving “nature to heal herself”.

Source: Wildlife Institute of IndiaSatellite imagery of oil well before and after the blow out. The impact area is in red square.

“OIL is a public sector company so the government itself is a violator here,” said M.D. Madhusudan, an independent researcher and a former member of the National Board for Wildlife, reacting to the report.

The report, which says 65 to 70 hectares of land including crop fields, grasslands and swamps, have been destroyed by the Baghjan disaster, calls for an evaluation of the cumulative impact of around 50 oil wells, including those in the planning stage, on local biodiversity in Assam. The areas earmarked for oil extraction border protected areas, rivers, wetlands and important bird areas (IBAs) harbouring critically endangered species of flora and fauna.

“Cumulative impact assessments are important because we don’t really have the larger picture of how we would like to proceed [with developmental projects in eco-sensitive areas],” said Madhusudan. “You cannot keep adding one oil well at a time in a landscape and assume that they will not add up to something more damaging.”

Apart from the 50 wells, existing and planned, as of September 5, three proposals by OIL, two by Vedanta Limited and one by Oil and Natural Gas Corporation (ONGC) were pending clearance for further oil and gas exploration in Assam.

The WII’s recommendations are especially significant since all on- and off-shore oil and gas exploration projects are--as of January 16--considered ‘B2’, a category that requires no public hearing. This means members of the local community, including those impacted by the Baghjan blowout, have no formal say in the clearance process for pending OIL, Vedanta Limited and ONGC proposals. 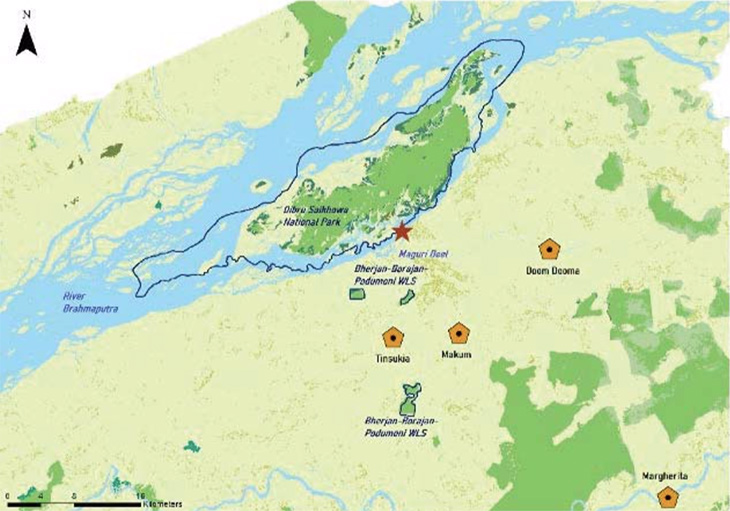 Source: Wildlife Institute of IndiaLandscape of Tinsukia and Dibrugarh districts. Protected areas in the vicinity are highlighted

NGT’s response to the Baghjan catastrophe

On June 24, the NGT constituted an eight-member expert committee to look into the impact of the Baghjan oil spill and fire, allowing it to induct other experts and institutions. Accordingly, the committee inducted the WII.

In July, this expert committee submitted a preliminary report documenting severe ecological damage near the site of the oil-spill and fire, as well as the impact on the livelihood of people in the area due to the contamination of groundwater and water bodies like the Maguri-Motapung wetland.

In its final report to the NGT in November, the committee will take into consideration “all relevant materials placed before us including that of WII”, Justice B.P. Katakey, chairperson of the expert committee and former judge of the Gauhati High Court, told IndiaSpend.

The WII’s report, obtained by this reporter through an RTI application filed with WII on July 23, is yet to be made available online, either on the MoEF&CC’s website or that of the WII. WII’s reply to the RTI application, received on August 20, confirmed that the report had been submitted to the ministry and it had so far not responded.

IndiaSpend has asked Manmohan Singh Negi, Additional Director General of Forests (Wildlife), MoEF&CC, to respond to WII’s recommendation of cumulative impact assessment of existing and future oil wells in Assam, and OIL officials for their reaction to its call for reassessment of the environmental clearance granted to the company’s projects in April. This story will be updated when they reply.

Environmental impact assessments (EIA) are studies conducted as part of clearances given to individual projects whereas cumulative impact assessments examine the entire range of projects--existing, planned and proposed--in an area.

“The potential of oil well blowout and oil spill like disaster like this is a reality,” states the WII report, referring to the Baghjan oil spill and fire. Therefore, it emphasises, oil wells in the vicinity of DSNP and IBAs like Maguri and Motapung wetland, Poba Reserve Forest, Kobo Chapori Proposed Reserve Forest and Amarpur Chapori “will be detrimental to the conservation value of this unique ecosystem”.

In clearance processes, disaster risks are routinely under-estimated “by both the regulatory authority and the companies [project proponents]”, commented Krithika A. Dinesh, a lawyer and researcher in environmental policy. She added that this is evident in the manner in which EIA reports are prepared and the lack of weightage given to concerns raised by the public and the scientific community.

Qamar Qureshi, one of three scientists who prepared the WII report on the Baghjan disaster, pointed out that in addition to regulatory authorities and project proponents, authorities that grant environmental clearances should also be held responsible for underestimating disaster risk. “Laws are good,” Qureshi said, “but the spirit and will of implementation is missing.”

India has approved over 270 projects in and around its most protected environments, including biodiversity hotspots and national parks, since July 2014, according to an IndiaSpend analysis. EIA documents are often riddled with errors as consultants hired to draw up the EIA “copy and paste from other reports”, Ritwick Dutta, an environment lawyer and managing trustee of the Legal Initiative for Forest and Environment, had told IndiaSpend. An IndiaSpend story in July highlighted the “problematic” environment clearance given to the Ken-Betwa project in Bundelkhand, with a critic of the project calling the EIA a “dishonest document” riddled with errors and manipulations.

The WII report estimates that 65-70 hectares of area around the oil well in Baghjan were destroyed in the recent disaster, including crop fields, grasslands and swamps.

During its impact study, the WII’s team encountered a dolphin that had died of oil poisoning, and several carcasses of dead fish, herpetofauna (reptiles and amphibians) and many species of insects. The surveyors did not encounter tadpoles in many water pools even though it was breeding season and cited this as “a great concern”. 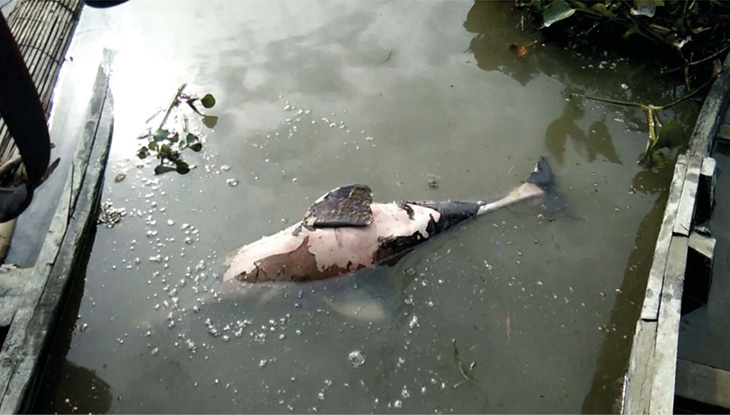 The report further said the oil spill had caused the death and wilting of many plant species, and had “severely affected” the health of forests and grasslands. It said there was a coating of oil on the vegetation, water bodies, as well as many species of river fauna, birds and mammals.

It noted that the richness of bird species in the area, which is famous for a large number of critically endangered bird species and a habitat for migratory birds, increased as you went further away from the site of the oil spill, showing its impact on bird-life.

The report, as well as independent experts, have emphasised the impact on local communities, for whom the wetlands and rivers are a critical lifeline.

“About 200-300 people are directly dependent on the beel [wetland] system for [personal] consumption and livelihood,” Narayan Sharma, assistant professor at Cotton University, Gauhati told IndiaSpend. Sharma is part of an expert committee set up by the Assam state government to assess the disaster.

“The oil well spilled [natural gas] condensate from May 27 to June 9, and this was deposited all over the area, including in rivers,” Sharma explained, “The fire spread rapidly [because of the preexisting condensate] and severely burnt some grasslands and wetlands in the area.” As of now, three OIL employees have died in the disaster, in which many houses also caught fire.

Petrochemicals like oil are toxic to flora and fauna. Additionally, toxic fumes from the blowout and the oil coating will have long-term impacts, the report warned. 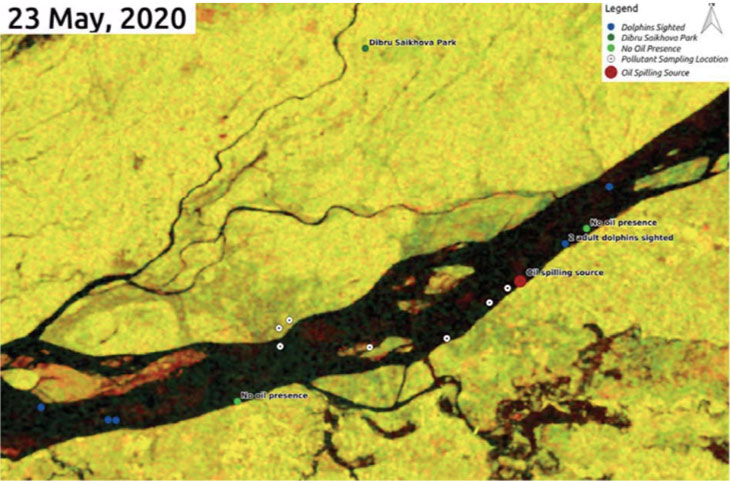 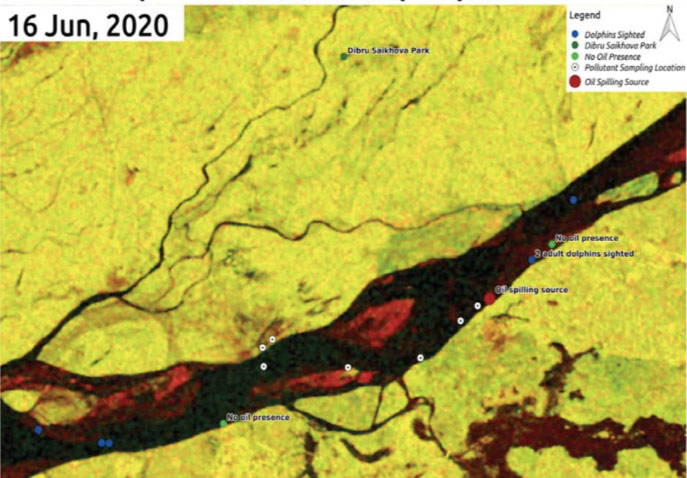 Source: Wildlife Institute of IndiaIn satellite images of the Maguri-Motapung wetlands, no oil pollution is visible on May 23, while oil contamination on vegetation and water is seen after the blow out on June 9.

Alongside oil, the well spewed pollutants like nitrogen dioxide (NO2), sulphur dioxide (SO2), carbon monoxide (CO) and formaldehyde (HCHO) into the environment.

“People in the area have reported severe breathing difficulty, headaches and nausea… even our survey team has suffered from the same symptoms and experienced heavy presence of oil and chemicals in the environment,” said the report.

Usually, the dissolved oxygen (DO) levels in the Brahmaputra river, which flows in the area, are between 7.23 mg/l and 10.92 mg/l, but the WII survey recorded DO levels between 0.94 mg/l and 7.35 mg/l. Motapung beel, a wetland, was the worst affected and aquatic fauna died in large numbers, the report said.

The species diversity and abundance of fish also decreased with a decrease in DO levels.

High concentrations of carcinogenic polycyclic aromatic hydrocarbons (PAHs) were also detected in Maguri-Motapung and the Lohit and Dibru rivers, including in fish populations. PAHs are generated during the combustion of fossil fuels. They have long-term effects, given their ability to seep into the groundwater.

Should some existing wells be shut down?

“Some trees and grasslands might look okay today and they might have withstood the initial shock but we don’t know what kind of physiological impacts have occurred,” Sharma said, emphasising the potential long-term impact of the catastrophe.

“For short-term energy needs, we are compromising our future,” Qureshi said, pointing out that there are only a handful of Indian examples of a system of riverine forests, savanna and swampy grasslands, among them in Assam and the Dudhwa Tiger Reserve in Uttar Pradesh.

While pointing out that the logical conclusion to the WII recommendation calling for a cumulative impact assessment would be the shutting down of some existing wells and/ or the scrapping of some planned wells, Madhusudan asked: “Which project are you going to scrap?” It is not clear, he said, on what basis a decision to shut down some projects and not others would be taken, if some projects are to be allowed to continue.

The WII report calls for an annual payment by OIL to the Assam Forest Department for restoration of the area affected by the Baghjan disaster. “But payment of monetary compensation can simply be absorbed as a cost of business, and serves neither as incentive to function in an environmentally responsible manner, nor as a deterrent against future violations,” Madhusudan said. Shutting down the well would be a “proportionate penalty”, he added.

OIL applied for environmental clearance for two of its three proposals for oil and gas exploration in Assam after the Baghjan blowout.

The oil well was still burning on September 9 when Sharma spoke to IndiaSpend. “How did OIL apply for more clearances when they have still not been able to contain the fire?”

OIL officials managed to control the fire in the oil well, as we said, on September 13, after 110 days of burning.