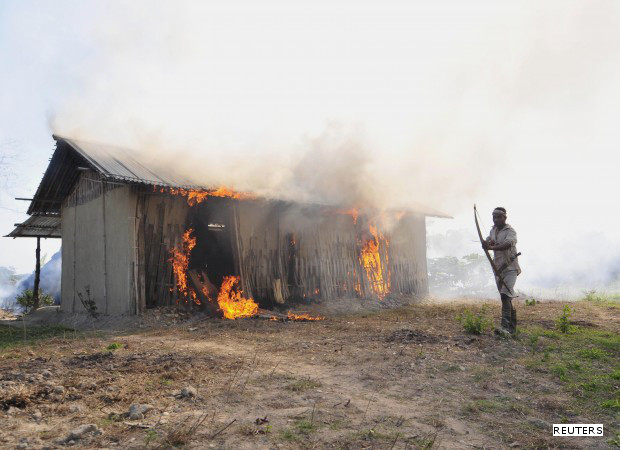 The death of more than 75 people, largely tribal migrants, in Congress-ruled Assam this week focused attention on India's forgotten insurgencies and terrorists in the north-east and made one clear point: Assam is now the deadliest of 29 Indian states when it comes to terrorism.

Jammu and Kashmir has seen the most people killed in relation to terrorism between 2005 to 2014—5597, according to data taken in part from South Asia Terrorism Portal, a resource from the Institute of Conflict Management headed by ex-IPS officer KPS Gill.

However, the state has also witnessed a drastic fall in violence over the last two years, allowing a record voter turnout of 65% in recent state elections. (The fall in terrorism-related violence in J&K has been covered by Indiaspend in an earlier report here.)

Over the last two years, 413 people—civilians, security forces and terrorists—died in Assam, compared with 374 in J&K and 240 in BJP-ruled Chhattisgarh.

The massacres carried out by terrorists of the National Democratic Front of Bodoland also focused attention on the continuing unrest in Assam, a state with a patchwork of ethnic groups, from Bangladeshi migrants, local Hindus, Muslim and Christians, local tribes and migrant tribes of the kind who were gunned down this week.

Therefore, in 2014, internal insurgencies presented a greater threat to India’s integrity and peace rather than external terrorism. Given that terrorism-related violence in J&K has come down significantly and resulted in a great voter turn out, we should focus on reducing and eliminating internal insurgencies. And Assam has been increasingly turning dangerous over the years.

Maoist violence also continues unabated and is spread across 15 states in India and has resulted in the deaths of at least 6,632 policemen and paramilitary forces since 2005.

As the chart below shows, casualties in J & K have declined significantly over the years, but terrorism has worsened in the North-East and states where left-wing Naxal terrorists operate.

The data below shows that Assam continues to be the most dangerous state in the North-East as well as India. Tripura and Mizoram are the safest.

Chhattisgarh and Jharkhand with 2,201 and 1,317 deaths continue to be the most affected by Maoist violence. Although there are fewer casualties in West Bengal, Andhra Pradesh, Bihar and Maharashtra, the Maoist insurgency is widespread in these states.

All data as of December 21, 2014, except for Assam, which has been updated to reflect the latest massacre.

(The author is Data Editor at the website The Political Indian.)