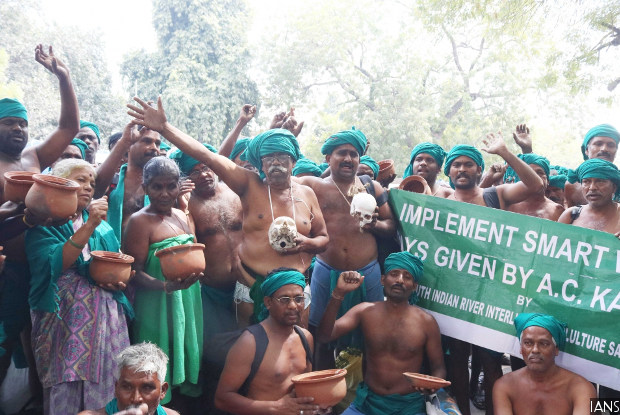 Tamil Nadu farmers during a hunger strike in New Delhi. In the midst of an agrarian turmoil in a state that produced 5.6% of India's rice in 2014-15, the agriculture ministry has predicted a record national harvest.

As the impact of the worst northeast monsoon in 140 years unfolds across Tamil Nadu, farmers sowed a third less land than they did in 2015-16, water levels in six major reservoirs continued to plunge, and suicides in the farm sector increased over five years.

In the midst of this agrarian turmoil in a state that produced 5.6% of India's rice in 2014-15, the agriculture ministry has predicted a record national harvest.

The agriculture ministry's third advance estimate forecast India's foodgrain production to be the highest ever, increasing by about 9% to 273.4 million tonne in the crop year 2016-17 ending June from 251.57 mt in 2015-16.

Tamil Nadu has reported 29% year-on-year drop in overall crop sowing till February 2, 2017, according to the latest situation report from the agriculture ministry.

The retreating northeast monsoon—usually unnoticed in India owing to the singular importance of the larger southwest monsoon—in 2016 was the worst ever over the last 140 years, according to Indian Meteorological Department (IMD) records, since 1876, as IndiaSpend reported in January 2017. Record-keeping began in 1871, but a worse northeast monsoon, which sweeps across Tamil Nadu, coastal Andhra Pradesh, south interior Karnataka and Kerala, between October and December, was recorded in 1876, making 2016 the year of the second-worst monsoon in 145 years.

Water levels in three of six major Tamil Nadu reservoirs monitored by Central Water Commission dropped 25-70% between January 5 and May 11, 2017, according to the commission data, even as the average across the six reservoirs was 82% less than normal for the week ending May 11, 2017. There are no official data on what percentage of Tamil Nadu farms are irrigated using water from the state's 78 reservoirs.

As the drought--officially declared as such on January 10, 2017--rolls on, the state government has told the Supreme Court it is not linked to suicides by farmers, a contention disputed by a representative of farmers in New Delhi, where a protest is drawing international attention, as protesters display what they say are the skulls of dead farmers.

Farm suicides not because of drought: State government

He claimed that over 400 farmers had killed themselves because of reasons attributable to the drought and police reports about these suicides had been filed. IndiaSpend could not independently verify this claim.

As many as 106 farmers died in January 2017 alone, according to Tamil media reports, following which the National Human Rights Commission issued a notice to the state government, asking for a detailed report about the steps proposed to be taken by the state government.

Suicides in the farm sector in Tamil Nadu--including landless farmers and agricultural labourers--increased 12% between 2010 and 2015, according to the latest available data from the National Crime Records Bureau (NCRB).

The police wrongly register many suicides related to drought or crop loss as those due to family problems, old age and other reasons, Ayyakannu told IndiaSpend. Besides, NCRB’s new classification of farm-related suicides under two categories–farmers and agricultural labourers--has also led to an apparent drop in farmer suicides over six years to 2014, as IndiaSpend reported in July 2015.

Source: Accidental Deaths & Suicides in India reports 2010, 2011, 2012, 2013, 2014 & 2015Note: Farm sector includes those who till their own land or someone else's as well as agricultural labourers. For the years 2010-13, figures are those reporting farming/agriculture under self-employment.

The Supreme Court, in a hearing on May 8, 2017, refused to intervene in the matter of compensation to the families of farmers who died in the wake of drought following the state’s worst monsoon in 140 years, the farmers’ counsel, N Rajaraman, told IndiaSpend.

The Supreme Court had said on May 3, 2017, that it was interested in the structural aspects of minimum support prices and mandis (local markets). The Supreme Court seemed reluctant to get involved in the more pressing issue of compensation, Rajaraman told IndiaSpend.

S Panneerselvam, Professor and Head, Agro Climate Research Centre, Tamil Nadu Agriculture University, Coimbatore, told IndiaSpend that they would be issuing an advisory based on the first forecast in April 2017 by the India Meteorological Department of the southwest monsoon as normal. The forecast will be updated in June.